Interest in Slovak contemporary art on the rise

TWO AUCTIONS of Slovak contemporary art held in Bratislava in late October provided art lovers with a great opportunity to acquire one or more examples of the newest trends on the Slovak art scene. Both events, an auction held by the SOGA auction house and a benefit auction by the Foundation-Centre for Contemporary Arts, brought surprises in the proceeds raised and sums paid for works by Slovak artists. In total, almost 200 pieces of art were on offer. 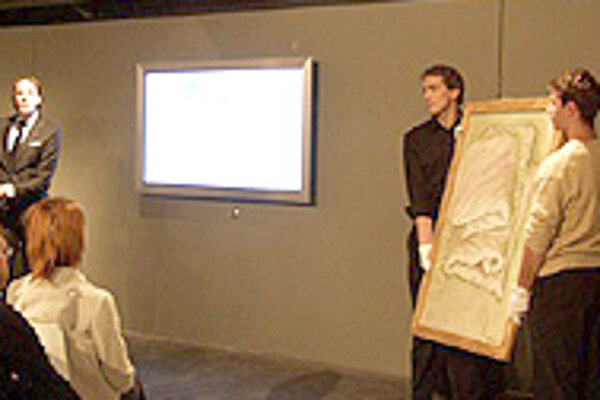 Font size:A-|A+
TWO AUCTIONS of Slovak contemporary art held in Bratislava in late October provided art lovers with a great opportunity to acquire one or more examples of the newest trends on the Slovak art scene. Both events, an auction held by the SOGA auction house and a benefit auction by the Foundation-Centre for Contemporary Arts, brought surprises in the proceeds raised and sums paid for works by Slovak artists. In total, almost 200 pieces of art were on offer.

"These two auctions show that there is an increased interest in Slovak contemporary art in Slovakia," art historian Zuzana Bartošová, from the Institute of Art History of the Slovak Academy of Sciences told The Slovak Spectator.

The concurrence of the events, which were held on two successive days, did not affect the results of the auctions, which both organisers hailed as successful.

This auction brought in the largest sum ever paid in Slovakia for a work by a living Slovak artist. An anonymous buyer made the purchase by phone, paying Sk1 million (€30,000) for Svedectvo V (Evidence V) by sculptor Jozef Jankovič. The starting price of this large-scale work made from wood, plaster and polyester was Sk600,000.

The previous record for Jankovič's work was Sk74,000.

Future auctions will show whether prices for works by Slovak contemporary artists will continue to increase or whether this was just an exception.

"I would not like to predict the prices of works by specific artists," said Bartošová. "In the case of Jankovič, I understand that the buyer wanted to obtain a prestigious artwork by one of the most important living Slovak artists because this work has been displayed in the exhibition room of the SOGA auction house for several years. The sum it was eventually sold for has made good use of the amount of time this artwork was on display in the exhibition hall."

The Foundation-Centre for Contemporary Arts invited the renowned auction house Sotheby's to lead its auction on October 24.

"We wanted to cooperate with one of the most renowned auction houses in the world, which Sotheby's certainly is," foundation administrator Bohdana Hromádková told The Slovak Spectator.

"For many people, Sotheby's is synonymous with 'auction' and a guarantee of the highest quality. The cooperation with this auction house gave the auction an international dimension," she said.

The centre chose Sotheby's Austrian branch in particular because of its flexibility and achievements, as well as its familiarity with the Central European region. This was the third time the foundation has worked with Sotheby's.

The success rate was similar to SOGA's auction, which was 46 percent, with 39 out of 85 objects sold. When these results are compared with previous years, this year's auction was the most financially successful, fetching Sk1.41 million.

"We can confirm the increasing interest not only from the side of corporate buyers," said Hromádková. "But the interest of individual buyers in Slovak contemporary arts in particular is growing."

A buyer's interest may be fuelled by a desire to build or improve on an art collection, or an interest in the arts and the desire to make it part of their environment, Hromádková said.

"During the last few years we have seen a bigger interest in Slovak contemporary art from abroad - buyers are arriving from, for example, Austria, the Czech Republic, and from the Netherlands too," Hromádková told The Slovak Spectator.

The auction lasted about 90 minutes. Most buyers concentrated on young artists, leaving many more established Slovak artists out in the cold. None of the potential buyers showed any interest in the most expensive work at the auction, Poetics of Descriptive Geometry by Rudolf Sikora, with a starting price of Sk250,000. His second work, The Grave of Suprematists IV, also remained unsold.

The fact that the auction "favourites"were left without new owners surprised the auction's curators, Alexandra Kusá and Lucia Gregorová.

"There were some surprises during the auction," Gregorová told the Hospodárske Noviny daily. "The price of some works unexpectedly increased steeply, and other works which we expected to sell immediately were not sold at all."

"The interest of buyers was strongest in two categories," Gregorová told The Slovak Spectator.

"On the one hand, there was a surprising interest in collectors' items of various media, such as experimental film, design prototypes, and a neo-constructivist sculpture. On the other hand, the participants bought works of contemporary young visual artists, such as Jarmila Džuppová and Erik Šille," she said.

Forty percent of the proceeds from the benefit auction will go to the foundation's grant programme, which supports projects by professional visual artists.

"The foundation is announcing an annual competition for grants for young Slovak professional artists to support low-cost exhibition projects as well as catalogues focused on contemporary art," said Hromádková.

Bartošová is convinced that there are a lot of potential artists in Slovakia.

"Slovak contemporary art is excellent," said Bartošová. "There is a lot of talent and an exceptionally high number of high-quality artworks."