SND premieres Balanchine, with all its challenges

SINCE TAKING over as director of the Slovak National Theatre (SND) ballet just over a year ago, Mário Radačovský has already led the ensemble to a number of historic firsts, the latest of which took place on October 26. 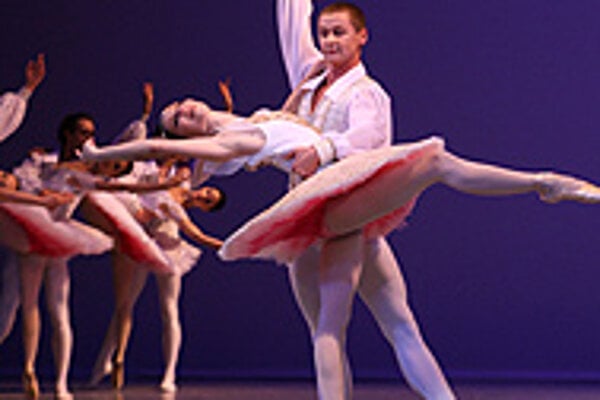 SINCE TAKING over as director of the Slovak National Theatre (SND) ballet just over a year ago, Mário Radačovský has already led the ensemble to a number of historic firsts, the latest of which took place on October 26.

The SND premiered a double bill of an extract from Raymonda, a 19th-century classic choreographed by famed Russian choreographer Marius Petipa, and Serenade, one of the best known and most beautiful pieces by the legendary Russian-born American choreographer George Balanchine.

Incredible as it may seem, considering his influence on 20th-century ballet, this was the first-ever Slovak performance of a Balanchine ballet. For the occasion, Radačovský invited colleagues from his time as a principal dancer at Les Grands Ballets Canadiens de Montreal, who spent weeks teaching Balanchine technique to the SND dancers.

Chang rehearsed the dancers in Raymonda, fine-tuning their command of Petipa's majestic, lyric choreography, which is usually staged with spectacular sets and costumes. Parker and Clifford undertook the more difficult task of teaching the intricacies of Balanchine choreography, which did away with elaborate sets to put the focus on the dancers. Balanchine technique demands precision, synchronicity, energy, beauty, speed, and, above all, musicality.

The premiere began with Serenade.

This ballet, set to Tchaikovsky's ardent Serenade for Strings, is striking for its visual tableaus. The curtain opens on 17 ballerinas draped in blue and glistening in the light of dawn, right arms stretched upwards, palms out. They dance in diagonal lines and form chains, weaving swiftly and gracefully in and out of complex patterns, until a man enters, and waltzes with the prima ballerina. As Russian folk motifs are heard in the score, the choreography expands until, at the end, the ballerina is carried away into the darkness of twilight.

SND soloists Roman Novitzky and Nikoleta Stehlíková danced elegantly as the waltzing couple, especially Stehlíková, who demonstrated superior muscle control the entire evening. The same can be said for the rest of the ensemble.

However, none of the SND dancers showed a convincing grasp of Balanchine technique.

In all fairness, none of them grew up learning the technique, which is not as widely taught in Europe as in North America. According to a dance review published in The New York Times in 2000, even the dancers of the St. Petersburg-based Kirov Ballet, which is considered one of Europe's best, found it difficult to master Balanchine's musical precision in ensemble work and invisibility of preparation for pirouettes and tours.

This raises an important question: does a piece qualify as Balanchine because he choreographed it or because it is danced in his style?

But with all the talk of technique aside, Serenade was a wonderful introduction to Balanchine for the SND dancers, who obviously revelled in the challenge of dancing it, and for their audience, who enthusiastically cheered their attempt.

The second part of the evening was an excerpt from Raymonda that includes solos, a pas de trois, and a pas de quatres. The set (designed by Ľudmila Várossová, who also did the costumes) was sparse - white hanging candles meant to imitate chandeliers - and the costumes were flashy white tutus and suits.

It was immediately clear that the dancers were more confident in this style. The first performer who stood out was Reona Sato, who showed fine musicality in both Serenade and Raymonda, and an infectious zest for dance. Adrian Ducin, one of the SND's up-and-coming male dancers, has a natural grace and a stage presence that drew attention to him during the pas de quatre.

Andrej Kremz, who has shown considerable potential in the past, was not in his best form this evening. His movements were slow and his landings sloppy. He even fell out of single pirouettes or tours en l'air more than once.

The star of the evening was Nikoleta Stehlíková, a perky, petite brunette who took the spotlight of her solo variation and ran with it. Most notable were her balance, crisp pirouettes, and considerable musicality. In this moment, her dancing was precise, sparkling, and effective.

The audience certainly noticed, and showered her with applause.