LOST TIME? is the provocative title of a huge exhibition that opened at the Slovak National Gallery (SNG) on October 30. It examines Slovak documentary photography from 1969 to 1989, the years between the suppression of the Prague Spring and the fall of the Iron Curtain. 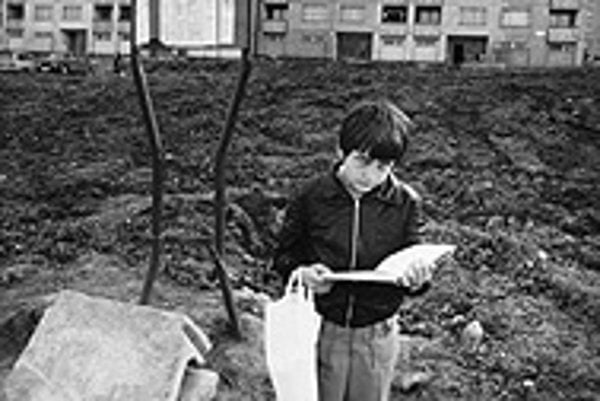 Font size:A-|A+
LOST TIME? is the provocative title of a huge exhibition that opened at the Slovak National Gallery (SNG) on October 30. It examines Slovak documentary photography from 1969 to 1989, the years between the suppression of the Prague Spring and the fall of the Iron Curtain.

The SNG has two goals for the exhibition: to create an official record of documentary photography from this period in Slovakia's history, which has been done on only a limited scale so far, and to give a sense of the visual aesthetic in Slovakia during those years.

The exhibition is one of the highlights of the 17th year of the Month of Photography, which started in Bratislava on October 30.

"Calling it just Lost Time would imply that this period in the country's history was wasted," the exhibit's co-curator, Petra Hanáková, said in her introduction. "The question mark leaves it open-ended, allowing the photos to answer whether our lives were really so bad then."

The exhibit consists of two thousand mostly black-and-white photos by 80 professional and amateur photographers that paint a comprehensive picture of life in Czechoslovakia under socialism.

Some of the images portray everyday life, such as those by Peter Procházka, Stano Pekár, Jozef Sedlák, father and son Pavol Breier, Rudolf Lendel, and Tibor Huszár, which show weddings, socialist construction projects that disrespected the country's history, May Day celebrations, and sporting events.

This style of photography offered a smoother career path than documentary photography, which often resulted in images that conflicted with the regime's ideology.

As a result, amateur photographers, who could fly under the regime's radar, became the most active documentary photographers.

The exhibit's curators spent two years visiting hundreds of studios and inspecting thousands of photos before selecting what they believed to be the best.

Lost Time? is just one of eight photography exhibitions that opened in Bratislava on October 30, and one of 35 that will mark the Month of Photography. All of those exhibits will close at the end of November, except Lost Time?, which runs until March 2, 2008.

"The festival has three pillars," director Václav Macek said about the Month of Photography, which is organized by the Central European House of Photography (SEDF).

The first is the presentation, support and promotion of photography from Central and Eastern Europe, with a stress on Slovak photography, he said. Of all the exhibitions, more than two thirds come from this region.

"Slovakia has become a stepping stone for photographers from all over Central and Eastern Europe," Macek said. "Having their work exhibited here opens doors in Paris, Berlin, and New York."

One of them displays photos by Viliam Malík, whose career spans three quarters of a century. Others include works by Peter Župník, young photographers Dominika Horáková and Petra Bošanská, and the Department of Photography and New Media at the Academy of Fine Arts and Design in Bratislava.

The second pillar of the festival is to present photography from different regions of the world. Last year, the region was China and Korea, and this year, it's Latin America.

The main exhibition in that section is Open Maps, which explores Latin American photography from 1991 to 2002.

"It gives an excellent and accurate overview of what is happening in photography in 13 countries," Macek said.

Open Maps features more than 200 photos by almost 50 photographers selected by Spanish curator Alejandro Castellote, who is, according to Macek, an "absolute expert" on Latin American photography. The impressive collection ranges in topics from documentary photography to politics to erotica to staged photography, all of which mirror Castellote's experiences and emotions during the two years he devoted to the project.

The third pillar of the festival is to attract prominent names from contemporary photography. To celebrate the 60th anniversary of the Magnum Photos agency, the festival's organizers invited two of its well-known members, Paolo Pellegrin from Italy and Carl de Keyzer from Belgium.

The photographers captured the images while on assignment in global hotspots such as Sudan, Iraq, and Pakistan.

"But there's a timeless quality about their pictures that differentiates them," Macek said. "The pictures inform and illustrate, as well as speak more deeply about people, about crises in the Third World, about the relationship between power and the powerless."

Paolo Pellegrin states in the festival's catalogue that he is still preoccupied with how to take pictures of intense suffering year after year without going mad or becoming a dry-eyed cynic.

"Basically, I try to be respectful in a situation that is not very respectful," it quotes him as saying. "It's a privilege to be able to witness people's extreme emotions, and I do that with great care."

Carl de Keyzer's photos are of Siberian prisons. (The Zone, which is also the exhibition's title, means "prison" in Siberian slang). Over the course of two years, de Keyzer documented daily life in 35 out of 135 prison camps in the region of Krasnojarsk, bringing the public stark images of the prisoners' world.

Dreamy Images of Female Beauty, an exhibition by Czech photographer Miroslav Tichý, is unique to the festival.

Tichý was unknown until he was almost 80 years old, when he was discovered at a photography festival in Arles, France in 2004. He worked in seclusion for decades, taking photos with homemade cameras and mounting the prints in homemade frames before adding the finishing touches in pencil. In the 1980s, his former neighbour, Roman Buxbaum, began collecting his works and forwarding the opinion that Tichý was an important figure in 20th century European photography.

"We have brought his work to Bratislava to let people make up their own mind on whether his photos and nudes, which are often blurred and sloppy, are the work of an amateur or a great artist," Macek added.

The events that accompany the photography festival include a photo auction on November 13, the popular portfolio review, workshops, the Sittcomm Award ceremony, and others.

What:The Month of Photography
When:all of November
Where:Dom Umenia (The House of Art) at SNP Square 12, the Slovak National Gallery at Námestie Ľ. Štúra 4, and the House of Central European Photography at Prepoštská 4 and galleries, museums and exhibition spaces across Bratislava