The amendment to the law on social insurance, approved in chaos on October 30, has caused a chain reaction of conflicts through the Slovak political scene.
The opposition Christian Democratic Movement (KDH), Slovak Christian-Democratic Union (SDKÚ) and Hungarian Coalition Party (SMK) are filing a proposal to fire Speaker of Parliament Pavol Paška for his role in the matter. 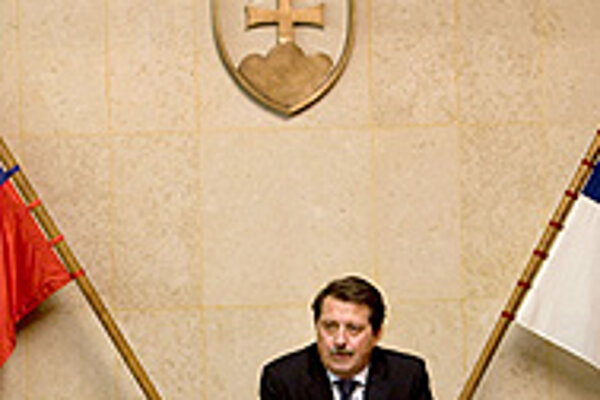 Font size:A-|A+
The amendment to the law on social insurance, approved in chaos on October 30, has caused a chain reaction of conflicts through the Slovak political scene.

The opposition Christian Democratic Movement (KDH), Slovak Christian-Democratic Union (SDKÚ) and Hungarian Coalition Party (SMK) are filing a proposal to fire Speaker of Parliament Pavol Paška for his role in the matter.

After the amendment to the law was passed, Paška ordered the parliamentary legislation department to omit the provision proposed by MP Iveta Radičová (SDKÚ), which was approved by MPs, from the final version of the law. Radičová's amendment directly contradicted the proposals of Labour Minister Viera Tomanová, which were also approved by parliament.

The version of the law with Paška's edits was published on the parliamentary website, even before it was sent to President Ivan Gašparovič for approval. (In Slovakia, any law approved by parliament must be signed by the speaker and the president before it comes into force.)

Paška later included Radičová's provision in the law he presented to the president, and Gašparovič said he would send the contradictory draft back to parliament without signing it. But because Paška left out the provision in the first place, the opposition parties say he broke the rules of democracy and should no longer serve as speaker.

"This is a manipulation of democratic rules," said former prime minister and SDKÚ chairman Mikuláš Dzurinda.

The amendment to the social-insurance law approved on October 30 opens up the capitalisation pillar of the pension system for six months. People who have been saving for their pensions in private accounts managed by pension fund management companies will be able to quit the so-called second pillar between January 2008 and June 2008.

The government's original idea was to open up the system both ways, to let in people who wish to enter the second pillar but missed the deadline for doing so back in 2006.

But shortly after the amendment was passed, parliament also approved an earlier proposal from Radičová, who suggested that people who didn't enter the second pillar by June 30, 2006, would not be allowed to enter it at all.

Paška said he had the option of rejecting Radičová's approved provision in the final version of the law. Parliamentary Law does not mention this possibility, but it does not prohibit it either, he told journalists on November 5.

"This is a solution that is not stipulated by any legal norm," Paška said.

He later said at a press conference: "There is not - and has never been - any solution that would have a prescriptive character, and there is no precedent."

Paška said he made the decision because he is the speaker of parliament.

"I have never been afraid to take the responsibility," he said. "Yes, I decided, because that is my mandate."

He added that he also respected the fact that there was a different opinion, so he decided to send the law to the president with Radičová's proposal.

"But I stand behind my decision, and when I am forced to make a decision, I will always do so," he said.

Asked by The Slovak Spectator whether he could have prevented the confusion before the vote was finalised, he answered that he is only human.

"I just ask for human tolerance," he said. "If I had to look at dozens of bills and amendments in detail, 24 hours would not be enough for me."

Even though Paška changed his mind and included the Radičová provision in the final draft of the law, the opposition is still calling for his ouster. The proposal to call a special session of parliament where they would try to have him sacked is expected to be submitted on November 19.

According to KDH chairman Pavol Hrušovský, Paška's initial handling of the amendment was a gross, flagrant violation of the laws and constitution.

"We lost the certainty that a similar situation will not happen again in the future," he told the SITA newswire on November 6. "It discredits the parliamentary democracy, the legal state."

He sees Paška's actions as an attempt to breach the constitution, he added.

The SDKÚ sees another reason to fire Paška - the parliament he led refused to deal with a petition for preserving the existing social insurance structure. The party says this is contempt for the 130,000 citizens who signed the petition.

Dzurinda says Paška has already been "usurping power and being arrogant" for some time.

He thinks Paška should have apologised for what he did, instead of insisting that his decision was right, even though he changed it.

But SMK vice-chairman József Berényi told the media his party had a hard time supporting the proposal for recalling the speaker, as his party thinks Paška is sensitive to Hungarian-Slovak relations.

"We are doing this with a heavy heart," Berényi said to SITA.

The motion to fire Paška will likely fail because the opposition does not have enough votes.

Paška reacted with sarcasm to the opposition's efforts.

"It is the opposition's right to call a special session, and thus to waste taxpayers' money," he said.

He also said he is surprised that the opposition MPs, who during their time in office "turned parliament into a politically corrupt institution, and are responsible for its total decline of honesty in the eyes of the public," now accuse him of manipulating democratic rules.

"Instead of constructive criticism, the opposition parties bring only chaos, malice and ideological hatred," he told the Sme daily on November 7.

The ruling Smer party dismissed the attempt to recall Paška, the party's vice-chairman.

"We consider the opposition proposal to call a special session aimed at removing Pavol Paška from the position of speaker of parliament to be ridiculous, although the opposition has the right to take such an initiative," said Smer party spokesperson Katarína Kližanová Rýsová.

Paška holds his position with dignity and in accordance with the law, she said. Moreover, Paška sent the complete bill, including the contradictory provisions, to the president.

Gašparovič already told media that he would not sign the contradictory draft amendment.

"It means that two paragraphs would need to be used instead of a single one from parliament," he said after a meeting with Paška. "Having decided this, I will not sign the bill, and return it quickly to parliament."

Radičová told The Slovak Spectator that the SDKÚ thought it was crucial to submit amendments to the bill on social insurance, as the party felt committed to the thousands of citizens who signed the petition for preserving the second pillar.

"All our amendments resulted from the petition signed by citizens," she said. "We wanted to accomplish what 130,000 citizens signed the petition for."

"Let us not forget that Mrs. Radičová, as far as I know, submitted the proposed amendments on 12 pages, individually numbered," he said. "It was really not easy to miss the things. "We voted for her bill in good faith, but MPs were misled, unfortunately. We voted for something we did not want to vote for."

The Slovak Spectator (TSS): Mr. Deputy Speaker, do you not think that you put MPs down, when you say that they did not know what they were voting for?

TSS: Radičová's bill was passed. Most of the MPs voted for it.

MČ: They voted for it by mistake.

TSS: Did you vote for it, too?

TSS: Does it mean that you do not know what you voted for?

MČ: But this is very insidious question, suggesting an answer already. That is really a grave problem.