THERE is good news and bad news for Slovakia's IT sector. The good news is that the number of Slovaks who are using computers has been increasing. But the bad news is that vulnerable groups like older people and the socially disadvantaged are falling farther behind in computer literacy. 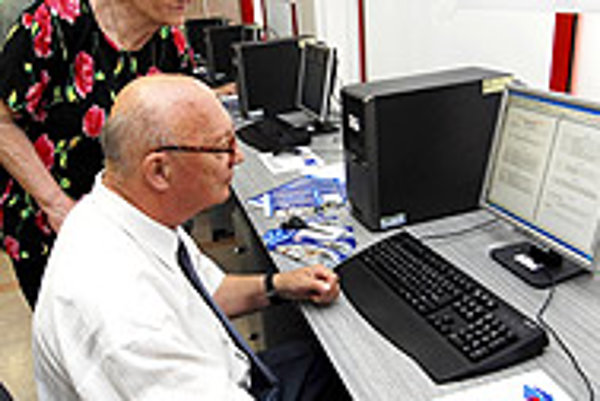 Font size:A-|A+
THERE is good news and bad news for Slovakia's IT sector. The good news is that the number of Slovaks who are using computers has been increasing. But the bad news is that vulnerable groups like older people and the socially disadvantaged are falling farther behind in computer literacy.

The so-called digital literacy gap continues to separate people based on their age, location and economic activities. Over the past two years, people older than 60, poorer households and residents of villages with less than 2,000 people have only made minimal gains in their ability to use information and communication technologies, according to a recent study by the Institute for Public Affairs (IVO) and Cisco Slovensko.

An even more optimistic prospect is that the more demanding and more sophisticated skills were the main ones that improved, including working with portable and palm devices, and installing and using different kinds of software.

People have also improved in their ability to work with internet browsers and different multimedia programmes, along with processing network information and using electronic services like internet banking, an official IVO release said.

Of all the skills that were tracked, survey respondents improved the most in using communication technologies such as internet phone, e-mail and chat.

The surveys used to compile the index were conducted on a representative sample of 1,149 respondents.

In spite of the gains, the report also stressed that the digitalisation of society has lost some of its momentum.

Gustáv Budinský, the executive manager of the IT Association of Slovakia, said the growth of digital literacy is slower than it should be and mostly driven by the young, who make information technologies a part of their lives.

"Older people mainly lack the motivation to use information-communication technologies because they just do not see the benefits that using them could bring," Budinský told The Slovak Spectator.

While the younger generation uses technology for its entertainment and communication aspects, the older generation is more focused on the service side, and they don't have enough content they can use, he added.

For example, the option of making a doctor's appointment and handling other administrative matters more quickly and simply online could motivate older people to use computers, he said.

Miroslav Littmann, a member of the board for the ORGA Trade IT company, agrees that digital literacy is generally lower than it could be in Slovakia.

"There is a generational problem, along with the late arrival of the mass use of computers in Slovakia," Littmann told The Slovak Spectator. "There are people who have not used computers all their active life, and they will most probably never use them."

Another factor limiting wider internet use is home internet installation. Only a third of the survey respondents have an internet connection at home, while the remaining 66 percent is offline, the report said.

People are least likely to be online in villages with 2,000 or fewer residents, where about 77 percent of the population does not have an internet connection.

Personal computer use among the population over the age of 14 is reaching 60 percent, and another nine percent have access to computers but do not use them. Almost 51 percent of those polled use the internet, while an additional six percent have this option but do not use it, said the report.

Digital literacy has increased due to the faster penetration of computers and the internet, said Budinský.

This spread has been supported by cheaper computers and internet access, along with the growing purchasing power of the population, the strengthening of the Slovak crown and more competition on the internet market.

"Other factors are new communication options, such as chat or IP phoning," Budinský said. "The third main factor is the development of content on the internet, mainly in the area of entertainment but also in the area of internet shopping and electronic banking."

The government has also contributed to this development with its eGovernment and different education programmes, but they need to do much more, he added. They should make more useful content available online, which would motivate people to use government services from the comfort of their own homes and save time waiting at different government offices.

The education system should also make information and communication technologies a regular part of the education process, Budinský said.

Even if nothing had been done to increase the digital literacy of adult population, young people with a high level of digital literacy would have pushed up the statistics anyway, Littmann said.

"With each year of a new generation, digital literacy will increase in Slovakia," he said.

There are shortcomings in the area of education, mainly in high schools, and the lack of accessible internet connection for reasonable price, Littmann said.

The biggest barriers to the spread of computer use in Slovakia are a lack of knowledge of foreign languages, technology teachers and motivation to become digitally literate, he added.