PRIME Minister Robert Fico is continuing to lash out at retail chains over food prices, saying they are abusing the situation on the global market to charge more for basic food products in Slovakia.
Retailers' profits are "typical for human trafficking or the arms trade, but not for food products," Fico said. 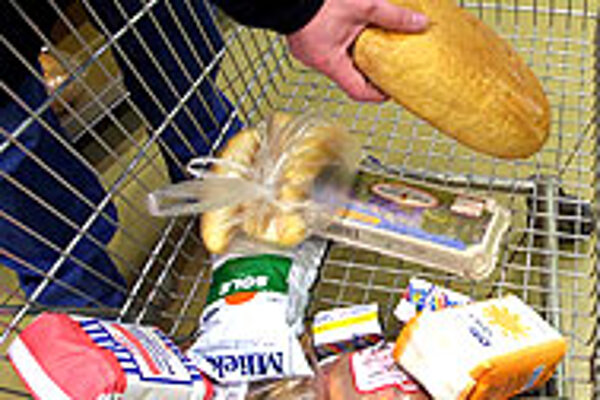 Font size:A-|A+  Comments disabled
PRIME Minister Robert Fico is continuing to lash out at retail chains over food prices, saying they are abusing the situation on the global market to charge more for basic food products in Slovakia.

Retailers' profits are "typical for human trafficking or the arms trade, but not for food products," Fico said.

The government is already working on a law that would prevent retailers from raising prices for food. Cabinet is expected to discuss the law "outlawing inappropriate (retail) conditions" by the end of November, Economy Minister Lubomír Jahnátek told the SITA newswire.

Retailers say there is no need for such legislation, and some fear the law might limit free trade. But food producers have been sympathetic with the governments' efforts.

"The law on retail chains has not been effective," said Ivan Oravec, chairman of the Slovak Agricultural and Food Chamber (SPPK), which represents food producers. "Many people are accusing us or the local governments of preparing a law to regulate prices. That is not true.

"We want the market to be preserved and we want this law to bring more ethics into the relationships and trading."

The proposed law aims to prevent retail chains from holding a dominant position, not only in setting prices, but in collecting fees for product registration, placement, promotion and so on, Oravec told The Slovak Spectator.

"The reason we initiated this law was that retail chains kept charging additional fees that prevented the producers from making a profit," Oravec said. "For example, if producers calculated a profit of five percent into the price for which they sold a product to the retail chain, after paying the fees, this profit disappeared.

"Our bakers and milk producers were the most affected."

The draft legislation bans the sale of products or services for less than the production cost or the purchase price of the goods. It also limits the fees that retail chains can charge suppliers for listing and placing their products in stores.

Retail chains can be fined up to Sk10 million (€300,000) if they violate the regulations. Slovak consumers have been paying more for bread, eggs and milk since late September, and the prices are likely to continue climbing by 10 to 20 percent, market watchers said.

Food prices grew even faster than expected in October. Inflation reached 3.3 percent year-on-year, while the market had been expecting consumer price growth below three percent, the Slovak Statistics Office reported.

Food prices have been steadily climbing on the global market for some time. Extensive droughts in Australia and Southern Europe, more demand from India and China, and developments around biofuels have all contributed to the increase, Oravec said.

One of the country's largest retailers said it trusts that the prime minister and the cabinet have good intentions with the law, but COOP Jednota Slovensko doubts the law will result in lower food prices.

A one-sided decision cannot stabilise inflation trends related to the installation of the euro and stop the growth of food prices, Gabriel Csollár, chairman of the COOP board of directors, told The Slovak Spectator.

"Who can protect the consumer the best, if not the invisible hand of the market?" Csollár said. "Nothing but the market and the competitive environment will protect the end consumer.

"I am not sure that the law on inappropriate conditions is a tool that could create balance. I rather see it as a tool that will further distort the market."

Tesco does not consider the law necessary either, saying it would harm its customers.

"We are also against any interventions in the free market because it distorts the business environment and supplier-buyer relations," Oľga Hrnčiarová, external relations manager of Tesco Stores, told The Slovak Spectator.

"We do not have information about profit levels in 'human trafficking or the arms trade,' but the regular profit margin in the food retail industry is still several times lower than the 40 percent reported by the media," Hrnčiarová said. "This comparison seems highly inappropriate for us."

"I believe he did not mean it," Csollár added. "Maybe he just did not have enough information."

Food chamber surveys clearly show that retail chains have a wide range of prices, Oravec said. In many cases, they sell products to customers for less than they paid for the product.

"Consequently, they put pressure on the producers to cut prices as well," he said. "This results in weakening the domestic competition."

The proposed law might cause food prices to increase even more, Oravec said. If retail chains do not want their profits to drop, and they are no longer allowed to make a profit on the purchasing end, they might raise food prices to compensate.

"But if we destroy the producers, the food prices will go up anyway - but even more radically, because any dependence on imports automatically means higher prices," Oravec said.

Csollár agrees that food prices are a sensitive issue, because surveys show 68 percent of Slovak consumers are highly "price sensitive".

But several sectors of the food industry influence prices, such as producers, processors and distributors - not just the retailers.

"Insensitive solutions might have a counter-productive effect, which is even higher prices," Csollár told The Slovak Spectator.

There is no such thing as a Slovak market for food products, Oravec said - there is only a European market. Prices for three commodities have gone up on the European market: wheat, oilseeds and milk products.

But there are also specifically Slovak conditions that contribute to this European trend, Csollár said.

"Farmers started acting in line with the market, reacting to the lower supply and higher demand," he said. The high level of concentration in the food processing industry also added to the developments.

Csollár said he expects prices to gradually stabilise, and increased competition to slow down the price jumps.

Fico met with representatives of retail chains operating in Slovakia on November 12. He said he wanted to seek solutions to ensure food prices that will help Slovakia meet the Maastricht inflation criterion for euro adoption, and also respect Slovak consumers' social situation and purchasing power.