Cars breathe life into ship transport on the Danube

ONE OF Slovakia's busiest roads, the highway from Bratislava to Trnava, will be faster, safer and more durable after 2011, the country's highway authority says. 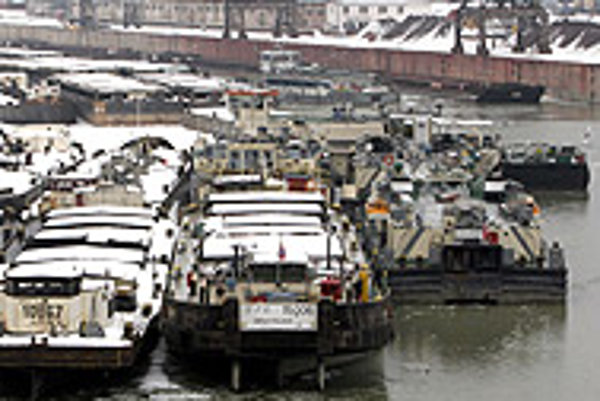 Highway widening could have downsides

ONE OF Slovakia's busiest roads, the highway from Bratislava to Trnava, will be faster, safer and more durable after 2011, the country's highway authority says.

The highway will get two new lanes, concrete guardrails and a concrete surface that can bear more traffic than an asphalt road, the Pravda daily wrote on November 12.

But while the highway is under construction, drivers will have to endure traffic jams. And it is not clear whether the tie-ups will stop after the widening is finished.

Construction works on the highway will start in 2009, and will cost Sk2.73 billion (€82.9 million). It will widen the highway to six lanes over a 13-kilometre stretch from the crossroads near Senec to the borders of the capital, shortly before the Avion shopping mall area.

The highway will be "bottlenecked" to four lanes at Avion, because the next part of the highway - including the Prístavný Most, or Harbour Bridge - simply cannot be widened. And that bottleneck could cause serious traffic problems.

Even the National Highway Company (NDS) fears the final effect of widening the highway.

"Just outside of the city, an ugly funnel will be formed, where six lanes will be shrunk to a mere four," said company spokesman Marcel Jánošík. "We will thus bring morning traffic jams - which so far have only happened several kilometres outside of Bratislava and gradually broken up over several exits - directly into the capital."

He hinted that completing the D4 by-pass (the "zero ring" with a sixth bridge across the Danube River and a tunnel through the Small Carpathians) could solve the Bratislava traffic problem.

"This way, transport trucks would no longer pass through Bratislava, and it would not slow down traffic," he said.

Representatives of C.S. Cargo announced the takeover at a press conference on November 6, the ČTK newswire wrote. They did not disclose the value of the transaction.

The purchase of mGal is the first big foreign transaction made by C.S. Cargo, and it is still awaiting the approval of the Slovak Antitrust Office.

The company's consolidated sales are expected to reach about Sk1 billion (€30.4 million) this year. Forty percent of that would come from mGal, and the rest would come from the Slovak branch of C.S. Cargo, which mGal will merge with.

C.S. Cargo decided to buy mGal mainly because of its portfolio of clients, said the group's operating manager, Tomáš Faller. Both mGal and C.S. Cargo are focused on shipping beer, and they do most of their shipping to Scandinavia, Central Europe and Eastern Europe.

"We were looking at several firms in Slovakia, and mGal was chosen for its amount of turnover, growth and its portfolio of clients," Faller added.

MGal has been on the Slovak market for 11 years, and it has a fleet of 85 vehicles. The company handles distribution for the Slovak SABMiller breweries.

C.S. Cargo might purchase another company in Poland, Hungary or Romania, where it has recently opened branches.

This spring, C.S Cargo bought its competitor, Šmidberský Transport, and became the biggest player on the Czech trucking market, with 2,000 vehicles and a market share of between 10 and 15 percent.

The consolidated sales of the group should add up to about 4.5 billion Czech crowns (Sk5.6 billion) this year.

Next year, the company expects to maintain the growth it has had in recent years, when it increased sales at the pace of about 30 percent yearly.

The principal company of the group is the Dutch C. S. Cargo Holding, which is owned for 70 percent by Trifid Holding, and the second shareholder is the UniCredit Group.

WATER transport is a promising form of shipping in Slovakia, and it still has room to grow.

"From the point of view of global logistics, water shipping is embracing a rapid development, and there have been growing amounts of goods shipped in recent years," the general manager of the Slovak Shipping and Ports (SPaP), Jaroslav Michalco, told the Hospodárske Noviny daily.

SPaP is responsible for the movement of 200 ships on the Danube, and operating cargo ports in Bratislava and Komárno. The company celebrated its 85th anniversary this year.

The ports in Bratislava and in Komárno are used mainly for shipping, loading and storing goods.

The company carries out its shipping with a fleet of more than 200 ships of different types and sizes. SPaP can ship the goods through a whole network of European waterways. Today, the Danube River is connected through channels with the major harbours of Amsterdam, Rotterdam and Antwerp.

SPaP most often ships mass commodities like iron ore and fertilisers. It also loads goods like machinery, construction equipment and vehicles. It can load large items that weigh up to 560 tonnes.

"More and more, we also ship cars, trucks and agricultural machinery," Michalco told the Sme daily. "We see potential for the future in shipping these commodities, because in Slovakia, the car industry is on the rise."

The container terminal has also had a big year-on-year growth, he told the daily.

Going into the future, the company is taking a closer look at the Bratislava port and how it is used.

The container terminal at the Bratislava port is directly connected to the railway. Trucks will be able to reach the port by a planned highway bypass. And it is connected to the Slovnaft oil refinery by an internal pipeline.

The company is aiming to create an international shipping centre in the future for loading, shipping and storing goods.

"The construction of a centre for different types of transport is crucial for us, as we have the advantage of three kinds of transport that meet here: railway, trucking and shipping," Michalco told the Hospodárske Noviny. "The pipeline from Slovnaft ends here, and we pump the diesel and other products from it directly to our ships."

The port is almost at full capacity, he added, and its location could pose other problems.

"The Bratislava port has a very unique location," said Michalco. "When it was founded at the end of the 19th century, it was far from the town. Now, Eurovea (a new housing and office development) is growing near it, and we are slowly shifting to the very centre of Bratislava."

If the volume of the water cargo transport increases further, it will be necessary to consider creating a second port and loading centre that is farther from the city centre, he said.

THE VÁH River will probably not reduce truck traffic on the highway to Bratislava for a long time.

The planned waterway, which was supposed to help all of Europe, is still not in sight, Ladislav Kyšeľa from the Slovak Water-Management Company told the ČTK newswire this summer. That's in spite of the fact that the idea of constructing a dam near Sereď, which would complement the existing network of Váh dams, has been revived.

"There were plans to make the Váh River navigable, but I do not think they will be carried out in the foreseeable future," Kyšeľa said. "I cannot imagine who would finance the construction. So far, all the attempts have failed due to financing."

The Sereď dam alone would require about Sk15 billion (€455.5 million), he said. More money would be needed to build the locks on the existing Váh dams from Hlohovec to Žilina, he added.

"The investors' estimates added up to about Sk110 billion," said Michal Pikus, one of the founders of The Váh Waterway non-governmental organisation.

However, those estimates included the cost of connecting the Váh River with the Odra River in Moravia, which flows into the Baltic Sea in Poland. The Váh flows into the Danube, and the Danube flows to the Black Sea.

It would also be costly to introduce measures to preserve the protected flora and fauna that could be endangered by the construction, he said.

Pikus does not expect a European waterway to come into being in the next few years, either, although his association was founded with the goal of supporting the transformation of the Váh into a shipping route.

"Things are just hovering in one place," he added.

Even if the money is found, another problem could be the missing second part of the Gabčíkovo waterworks, Kyšeľa said. The Hungarian side of the project, the Nagymaros dam, was supposed to raise the level of the Váh River, as there is currently too little water at its mouth in Komárno and shipping is only possible when the water level is higher, he added. But the Hungarian part was never completed so the water level is too low.

There could also be problems with ships passing through Piešťany, as the famous Colonnade Bridge in the spa town would stand in the ships' way, he said.

HEFTY fees for shipping goods by rail have been bad for Slovakia's rail cargo company, but good for the trucking industry.

Trucking has become the biggest part of the shipping industry in Slovakia, and truck sales are growing.

The Slovak rail cargo company, ŽSSK Cargo, pays the highest fees for using the railway in all of Europe, the Hospodárske Noviny economic daily wrote on November 5. That makes it more profitable to ship goods by road than by rail.

Foreign countries are increasingly counting on the completion of road and highway networks here. For some of them, it has become a vital condition for their investments.

Compared to other European countries, Slovakia has less expensive tolls and a bigger area within reach of the companies that is accessible by road.

The increase in trucking is hitting railway shipping in Slovakia. Domestic rail shipping was down by almost eight percent last year, and the problems with the high fees are expected to continue, said Marián Augustín, the head of the ŽSSK Cargo.

"Annually, we lose 45 percent of our costs (to rail fees)," he said. "So (shipping by rail) costs us more than €9 per kilometre. Prices in Western Europe are invariably lower, and vary from €1 to €5."

That means rail shipping in Slovakia faces ever stronger foreign competition. It could put the brakes on the recently-announced merger of ŽSSK Cargo with its Czech rail cargo counterpart, planned to go ahead after the Czech ČD Cargo company is formed in December.

Slovakia has a better geographical location than Western Europe, which also plays an important role in drawing investors to the region. That means in order to compete with trucking, Slovak Cargo will first have to manage its logistics well.