SKI RESORTS that were doing final checks and repairs on their equipment have suddenly found their slopes covered in snow.
The ski season in Slovakia started on November 10, giving it a chance of lasting an unbelievable 180 days until May 8, when it traditionally ends. The snow is already as deep as 60 centimetres in some places, providing excellent skiing conditions. 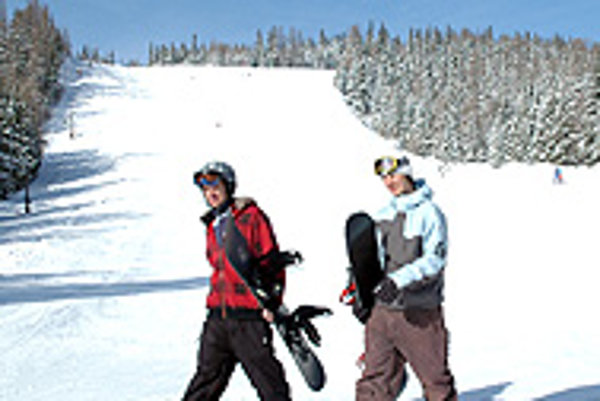 Font size:A-|A+0
SKI RESORTS that were doing final checks and repairs on their equipment have suddenly found their slopes covered in snow.

The ski season in Slovakia started on November 10, giving it a chance of lasting an unbelievable 180 days until May 8, when it traditionally ends. The snow is already as deep as 60 centimetres in some places, providing excellent skiing conditions.

As in previous years, the Park Snow Vysoké Tatry ski resort at Štrbské Pleso in the High Tatras was the first to open this season.

The Donovaly ski resort in the Low Tatras, which has reported drifts up to 40 centimetres, planned to turn on its lifts on November 17. Some other resorts may do the same.

The good news for skiers is that the prices of ski passes have remained almost unchanged in spite of the losses ski resorts, except Štrbské Pleso, suffered last season due to the unexpectedly warm winter.

This year, the resorts have invested heavily into improving snow makers, services, and infrastructure. The current trend is to improve the quality of resorts above 1,000 metres, which will most likely continue to be profitable despite global warming.

Chopok-Juh, a resort on the southern slope of the Chopok mountain in the Low Tatras, serves as an example. The resorts at Štrbské Pleso, Donovaly, and Liptovské Revúce also invested millions into snow makers.

In the High Tatras, brand new cars were installed on the funicular from Starý Smokovec up to Hrebienok. Its first ride is set for December 23.

The funicular is undergoing extensive modernisation after more than 30 years that will make it faster, increase its capacity from 120 people to 160, and create a glass roof for admiring the natural surroundings.

"While the old cars needed seven minutes for the 1,937-metre long route, the new ones will need only 4.5 minutes," Vladislav Beka, the project manager of Tatranské Lanové Dráhy, told the SITA newswire.

The modernisation and the new cars will cost about Sk250 million in total.

Skiers can also look forward to new ski lifts. A new four-chair ski lift will be built in Mýto pod Ďumbierom in the Low Tatras. The original ski lift in Biela Púť in the Jasná ski resort, also in the Low Tatras, will be replaced with a four-chair lift, too. Close to its lower station, a new service centre was built and the ski slope was widened and lengthened.

Those who like skiing on Chopok slopes can look forward to a renovated restaurant at Luková. Free parking for up to 130 cars will be built only 100 metres away from a new cableway at Biela Púť. The ski slope from Kosodrevina to Srdiečko, whose steep lower part was troublesome in the past, underwent some terrain adjustments.

A brand new ski resort close to Banská Štiavnica should open its doors this winter. A four-seat chairlift will take skiers up to the slope, which is more than a kilometre long.

The Donovaly and Liptovké Revúce resorts are starting to operate under the common name Park Snow. This is the first step to the planned inter-connection of these resorts with lifts and cableways projected over the next five to seven years.

Donovaly is organising a night of sledging for families with children at a lit slope at Záhradište.

The Vrátna in Malá Fatra resort extended its downhill course at Poludňový Grúň (1,000 - 1,260 metres) for more demanding skiers and built a new apres-ski bar at Paseky. A small lift at Chleb in the upper part of this location will be built as well.

Winter weather will remain in Slovakia for the next few days. Even though meteorologists are concerned about such an early arrival of winter, which might be compensated for with a longer period of warmer weather, ski resorts could not have wished for a better start to the season. In altitudes above 1,000 metres the snow is already 50 to 70 centimetres deep and still falling. If properly treated, this will form an excellent base, which in combination with the artificial snow, might just survive any warm weather.

For more information about ski resorts, go to www.goski.sk (in Slovak).