Minister next to go?

PRIME Minister Robert Fico added more fuel to the fire of the ruling coalition crisis when he called on Agriculture Minister Miroslav Jureňa, a nominee of the Movement for a Democratic Slovakia party (HZDS), to step down for what he called an indisputable political responsibility for the land transfer scandal. 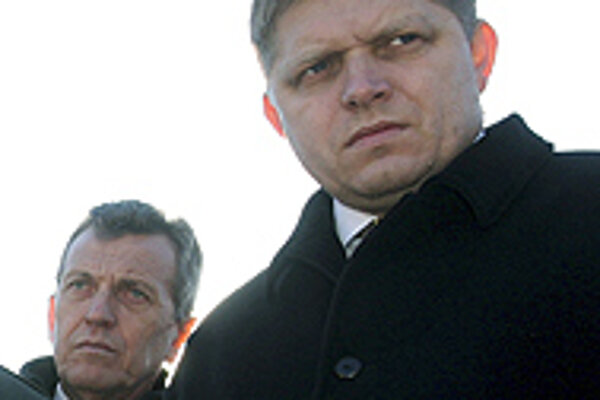 Font size:A-|A+0
Prime Minister Robert Fico has threatened to sack Agriculture Minister Miroslav Jureňa (left) if the minister doesn't step down over the land transfer scandal. A questionable deal in the Slovak Land Fund, which is under the agriculture ministry's jurisdiction, sparked the conflict in the ruling coalition.
photo: ČTK

PRIME Minister Robert Fico added more fuel to the fire of the ruling coalition crisis when he called on Agriculture Minister Miroslav Jureňa, a nominee of the Movement for a Democratic Slovakia party (HZDS), to step down for what he called an indisputable political responsibility for the land transfer scandal.

Though tensions have continued to escalate, political analysts do not expect these to be the dying days of the ruling coalition.

Fico said he sees Jureňa's resignation as the only way out of the ruling coalition crisis. If the minister does not resign on his own, Fico said he would sack him.

"Neither formal, nor informal meetings of the coalition party leaders have led to a sufficient solution to the land scandal caused by an HZDS nominee," Fico told the press, explaining why he asked Jureňa to leave.

"If he does so, I will consider it an expression of high political culture," Fico continued. "If he decides to stay in his post, on Friday (November 23) at 10 a.m., I will visit the president and I will submit a proposal for Jureňa's recall."

Jureňa said it was possible that land scandal could cost his party its spot in the government. HZDS boss Vladimír Mečiar has been standing firmly behind his nominee.

Tensions paralysed the ruling coalition after intensifying media reports on the land transfer scandal. Fico first called on Jureňa to sack the deputy director of the Slovak Land Fund, Branislav Bríza, who the prime minister said was responsible for the transfers.

The scandal was sparked by a deal involving land plots covering more than one million square metres and worth about Sk1.5 billion (€45.4 million), situated in the lucrative High Tatras area. The plots were sold for Sk13 million to GVM, a company close to Mečiar, the Sme daily reported.

Bríza cultivated the deal and signed the contract that transferred the land back to the former owners under the restitution law, and the owner promptly sold the land to the company.

GVM co-owner Milan Bališ has been seen in public with Mečiar, according to Sme.

Bríza, an HZDS nominee, announced his resignation on November 15, but that did not calm the tensions.

Fico said Bríza's departure was only the first step needed to solve the crisis, but not enough on its own, because he does not want to allow any suspicions that he was involved in shady deals.

"I consider Mr. Jureňa a skilled guy, as far as agriculture is concerned," Fico told the TA3 television news channel. "Being skilled and professional is one thing, but political responsibility for the development is other thing."

The HZDS has been denying any wrongdoing from the very beginning, and Mečiar and Fico exchanged several barbed comments in the press over the matter.

Coalition not expected to fall

The prime minister admitted that his demand for Jureňa to resign might result in collapse of the ruling coalition.

"I am absolutely and fully aware of the consequences that my demand on Jureňa might have on the existence of the ruling coalition," Fico told the press. "For me, the transparency and purity of this government is more important than its continuing existence."

But political scientists do not expect the ruling coalition crisis to go much further.

"I would be really surprised if the ruling coalition falls apart," Grigorij Mesežnikov, a political scientist and president of the Institute for Public Affairs think-tank, told The Slovak Spectator.

"The current state in the ruling coalition is similar to the calm before the storm; except that, in my opinion, the storm will not come," political scientist Miroslav Kusý said.

Even in this situation, the government will likely find a compromise, he said.

"Mečiar cannot gain anything if he starts a fight," Kusý told The Slovak Spectator. "He can only lose. On the contrary, Fico would gain the credibility of a person who is pursuing moral principles to the very end."

The HZDS has been rapidly losing ground in voters' opinion polls. Some analysts say that if the popularity of the HZDS sinks further, the party might not make it into parliament in the next national elections.

"Any ruling coalition conflict that would result in the collapse of the union would condemn the HZDS to a definite political fall," said Kusý.

The most probable outcome, he predicts, is that Jureňa resigns so that the prime minister does not have to sack him, while Mečiar installs his own minister to replace Jureňa.

"This will be the compromise," Kusý said.

But Kusý questions why the conflict around the Slovak Land Fund has only emerged now, when the suspicious details of the land transfer were known before.

The scandal broke when representatives the Party of European Socialists (PES) were visiting Slovakia to monitor the situation here, he said

PES has suspended the membership of Fico's ruling Smer party due to its union with Ján Slota's Slovak National Party (SNS), which the Eurosocialists describe as an extreme right party.

"(The tensions escalated) exactly at the time when the issue of Smer's union with the nationalist SNS and the way Smer solves minority issues was being discussed," Kusý said. "It was as though Fico just said, 'My problem is not Slota and national minorities but Mečiar and corruption; this is what gives me the most worry.'"

The opposition parties said that not only Jureňa, but Fico himself carries political responsibility for the land fund scandal.

He should resign for the mismanagement of the land fund and depriving people of considerable finances, Martin Fronc, the deputy chairman of Christian Democratic Movement (KDH), told the SITA newswire.

Fico knew about the whole case several months ago but he only took action after the pressure from media and the public started, he added.

The chairman of the Slovak Democratic and Christian Union (SDKÚ), Mikuláš Dzurinda, told a November 22 press conference that his party would submit a proposal to recall the prime minister.

"I am calling on Robert Fico to stop camouflaging (the problem) when this country is losing billions," Dzurinda said.

He said the issue will only be resolved if every centimetre of the dubiously-purchased land is returned.

The SDKÚ plans to discuss its options with other political parties.

Jureňa would be the first minister to be replaced since the Fico government took over in July 2006. Based on a ruling coalition deal, the agriculture minister's post belongs to the HZDS.