ROMA children in Slovakia continue to be largely segregated into inferior education, including a disproportionate number sent to schools and classes for children with special needs, Amnesty International said in a new report. 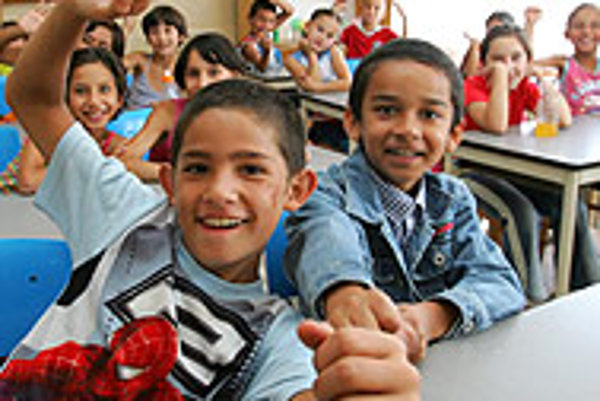 Font size:A-|A+
ROMA children in Slovakia continue to be largely segregated into inferior education, including a disproportionate number sent to schools and classes for children with special needs, Amnesty International said in a new report.

Recent government initiatives have failed to address these issues, and the underlying causes of the violations have not been effectively and consistently tackled, the human rights watchdog says.

"Segregation will only increase the language, cultural and economic isolation of the Roma population in Slovakia," Monika Navrátilová, spokeswoman of Amnesty International Slovensko, told The Slovak Spectator.

Amnesty International is using the report, Still segregated, still unequal: Violation of the right to education of Roma children in Slovakia, to launch a campaign for change. Supported by the international community and the European Union, it is calling on the Slovak government to show leadership by ending the grave violations of Roma children's right to education, the report says.

"The goal of the Amnesty International report was not to become just another piece of neutral statistical research, but rather to be a constructive criticism of reality, in terms of the barriers that members of many Roma communities currently face in some parts of Slovakia," Navrátilová said.

The Roma of eastern Slovakia are among the most deprived communities in Europe, Amnesty International said. There are about 500,000 Roma living in Slovakia, forming the country's biggest ethnic community, the report said.

According to Amnesty International, Roma children are often signed up for special schools for children with mental or physical disabilities, where they get a second-class education. In some parts of Slovakia, 80 percent of the students in special schools are Roma.

In many cases, Roma children did not go to kindergarten and do not speak Slovak, and they are often sent to those schools after an incorrect evaluation. It is rarely possible for these students to return to regular schools, the report said.

Čaplovič and the government proxy for the Roma community, Anna Botošová, disagree with these conclusions.

Čaplovič said it was unfair for Amnesty International to choose the five worst Roma settlements in Slovakia for its report. It focused only on the Spiš and Šariš regions in eastern Slovakia, and segregated settlements like those in Jarovnice, Markušovce, Hermanovce and Letanovce, the SITA newswire wrote.

Čaplovič called it, "a truly manipulated and unprofessional survey." He said the report generalises the problems of the Roma community in Slovakia based on findings from these settlements, and choosing the five best Roma localities would be just as unfair.

"The Amnesty International report is not trying to generalise the situation," she said. "On the contrary, the report said that the findings relate to some parts of eastern and central Slovakia.

"AI researchers, during their mission in Slovakia, visited a large number of Roma settlements from Bratislava to Košice and they know the situation intimately," she continued. "The final selection of the locations was to show the impact of specific policies and measures on specific people in the most problematic areas of the country."

But Čaplovič said that since the report is based on villages with a majority Roma population, it is no wonder that most students in local schools are Roma, he added.

"AI does not deny that the problem of Roma communities is a complex problem and its solution calls for a long-term effort, but we have to start fighting the problem somewhere," Navrátilová said.

"The value of the report is the clear definition of specific problems and steps that the government should take in order to remove the segregation of Roma students in schools, along with putting pressure on the international community to immediately solve this issue."

Amnesty International's recommendations for the government include immediately adopting a clear legislative requirement to remove segregated education, and starting a consultation process about fulfilling this obligation that would include a Roma representative.

The government should make it a priority to let Roma children exercise their right to free mandatory education, and amend the education law so that the Roma language is equivalent to other minority languages, the report said.

Finally, Amnesty International said the government should craft an effective complaint mechanism that will let it investigate all the complaints pertaining to segregation, and allow parents to demand restitution.

Čaplovič admitted that there are schools in Slovakia that struggle with problems of segregation of Roma children.

But it is not only the government's business to address this issue, he told the media -school principals, the local administration and other parties should work to solve the problem, he said.

Local school administrations get more money for schools for children with special needs, he added.

The research and statistics gathering behind the report took place between 2006 and 2007. Amnesty International consulted with representatives of Roma communities, the state, regional and local governments, and the non-governmental organisation sector, along with education officials and other professionals.

Amnesty International is an independent worldwide movement with more than 2.2 million members in over 150 countries.