ONLY a couple hundred people celebrated the birthday of democracy in Slovakia this year.
It was a big difference from 18 years ago, when hundreds of thousands of people gathered on the country's public squares to protest and bring down the totalitarian regime in what is today Slovakia. This November 17, only a few attended the ceremonies in the same squares. 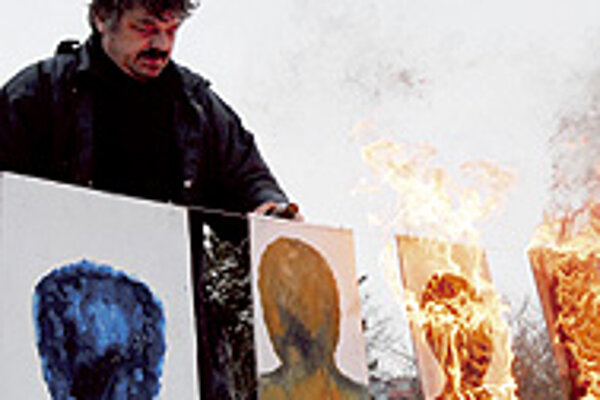 Font size:A-|A+
ONLY a couple hundred people celebrated the birthday of democracy in Slovakia this year.

It was a big difference from 18 years ago, when hundreds of thousands of people gathered on the country's public squares to protest and bring down the totalitarian regime in what is today Slovakia. This November 17, only a few attended the ceremonies in the same squares.

Most November 17 gatherings actually served as platforms for protesting against the current government, said sociologist Zuzana Kusá. Parties or groups used the stages to promote their own agenda or to try to legitimise their existence, she said.

Among them was Slovenská Pospolitosť, an extreme right party banned by the interior ministry, which held its gathering on that day.

As they did last year, the country's top representatives ignored the celebrations on the Day of the Fight for Freedom and Democracy, as November 17 is officially called, and sent out statements via their press departments.

During a rally at SNP Square in Bratislava organised by the main opposition parties on November 16, Prime Minister Robert Fico was attending the general assembly of the Matica Slovenská culture and heritage organisation in Martin.

On the anniversary itself, Fico was in Mariánske Lázně to serve as the best man at the wedding of former Czech prime minister Jiří Paroubek. He was marrying a Slovak interpreter 21 years his junior, Petra Kováčová.

The Czech media tore into Paroubek for scheduling his wedding on the state holiday.

Fico released a statement noting that the pro-democracy movement, which in November 1989 triggered the so-called Velvet Revolution that brought about the fall of communism in the former Czechoslovakia, was not only a fight for freedom for Slovaks, but also a fight for an independent state, the ČTK newswire wrote.

"SNP Square in Bratislava became the centre of protests of tens of thousands of Slovaks, who in front of Europe and the world clearly voiced their desire for state independence," the prime minister wrote.

President Ivan Gašparovič warned about racial intolerance and recognised the second anniversary of the murder of student Daniel Tupý, believed to have been killed by skinheads.

The anniversary temporarily united leaders of the opposition: Mikuláš Dzurinda of the Slovak Democratic and Christian Union (SDKÚ), Pál Csáky of the Hungarian Coalition Party (SMK) and Pavol Hrušovský of the Christian Democratic Movement (KDH), who met at SNP Square on November 16. Czech Prime Minister Mirek Topolánek joined them on stage and lit candles at a barbed-wire fence, symbolising the Iron Curtain that was thrown down during the Velvet Revolution.

"Freedom and democracy in Slovakia is 18 years old," Hrušovský said. "It has matured."

Dzurinda called on the hundreds of gathered people not to let the space for democracy and freedom narrow, while Csáky stressed in his speech that they do not want any distortion of democratic values or Velvet Counterrevolution.

A rally organised by the Civic Conservative Party (OKS), the Civic-Democratic Youth and Citizens Against Totalitarianism at SNP Square had the biggest turn-out on November 17, but it instantly turned into a protest against the current government of Robert Fico.

"We met here because we feel that it is necessary to constantly protect democracy and freedom, and that the current government endangers them with its activities," said Juraj Petrovič from OKS, a smaller party that has not made it into parliament.

"We want to show clearly our strong disagreement with methods and practices of governing, as well as politics, that overstep the borders of the democratic mandate of any government."

OKS criticised the government for passing bills and amendments that endanger basic human rights, and for attacking freedom of speech and the media.

After a march from SNP Square, the groups laid a wreath on "the grave of common sense" in front of the Cabinet Office.

More events were announced for the day of the anniversary, but the turnout was a disappointment for their organisers.

Another happening called the Public Execution, announced by artist Fero Guldan, attracted only 10 people including the artist himself. After he hung pictures of silhouettes representing the government at the place where a huge sculpture of communist leader Klement Gottwald and his comrades used to stand, he doused them with petrol and lit them on fire.

The fire was not strong enough to destroy the cardboard pictures completely.

"Maybe this time the fire was too small to burn down the government," Guldan mused.

Afterwards, he offered some wine to the audience. The whole happening was over after less than 30 minutes.

About 30 supporters, instead of the expected 500, attended at the nationalist Slovenská Pospolitosť rally. They gathered under the banner of the Initiative for Freedom of Speech in front of the Presidential Palace on the afternoon on November 17.

Last year the Bratislava city council cancelled a similar rally and the whole case ended up in court. This year, police just monitored the event.

A petition protesting the bill against terrorism and extremism, which is in the pipeline, was passed around to collect signatures.

In his speech, the initiative's Michal Laššák questioned the Holocaust and accused the state of preventing scientific research and restricting freedom of speech.

"While any other historical event can be the subject of research, and opinions on its existence or non-existence can be a subject of public discussion, the Jewish Holocaust remains untouchable under the threat of the imprisonment," said Laššák, the SITA newswire wrote.

The communists also marked November 17, 1989, which they continue to portray as a political coup. About 100 members and supporters of the Slovak Communist Party met in Bratislava to protest the decline in the standards of living since 1989.

Party vice-chair Jana Staroselská told the news channel TA3 that people rallying 18 years ago did not really want a change of the regime - they just didn't want to wait in line for bananas.

"They only wanted full shops," she said.

Despite the low-profile celebrations, Kusá doesn't think that people see November 17 as unimportant.

"When you listen to how people talk about it, you can see that November '89 serves as a milestone," she told The Slovak Spectator. "People divide their lives into period before November and after November."

But she thinks that holding a public commemoration of the event that led to the change of the regime is complicated from many reasons. In general, it might be said that after November 1989, society became more individual and people's lives became more private.

"Success, as well as misery, is a private matter," Kusá said.

What it all means

On November 17, 1989, students in Prague gathered to mark the events of November 17, 1939. On that day, known as the International Students' Day, nine Czech students were executed as a response to anti-Nazi demonstrations prompted by the death of protesting student Jan Opletal. In addition, Czech universities were shut down and more than a thousand Czech students were sent to concentration camps.

That day in 1989, the riot police suppressed a peaceful student demonstration in Prague. With the atmosphere of Perestroika and the recent fall of the Berlin Wall, this event sparked a series of demonstrations across the country and led to the fall of the communist regime in Czechoslovakia.