AFTER plenty of discussion, the largest tender in the history of Slovakia is now rolling forward.
The Transportation Ministry released the public-private partnership (PPP) tender for the first package of highway sections on the European Union Official Journal's public procurement website on November 17, inviting companies and consortiums to submit their bids by January 8. 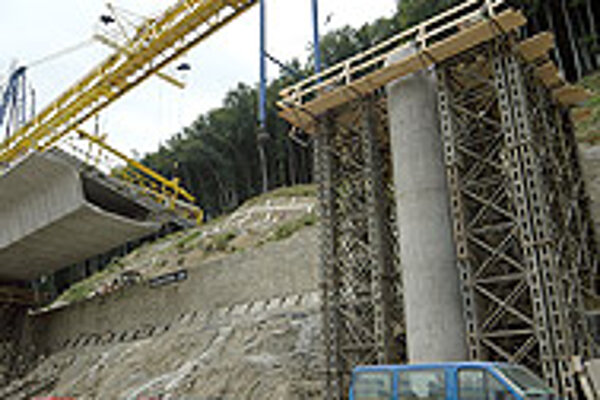 Font size:A-|A+0
AFTER plenty of discussion, the largest tender in the history of Slovakia is now rolling forward.

The Transportation Ministry released the public-private partnership (PPP) tender for the first package of highway sections on the European Union Official Journal's public procurement website on November 17, inviting companies and consortiums to submit their bids by January 8.

This is the first PPP project the country has embarked on. The winner of the tender will plan, construct, finance, operate and set up maintenance for five stretches of the D1 highway, covering a total distance of 74.84 kilometres. The contract would be signed for 30 years.

While the tender terms do not specify the estimated net value of the contract, the Transportation Ministry has hinted that it might reach Sk49 billion (€1.5 billion) without VAT. That means that the planning, construction, operation and maintenance of each kilometre of this stretch would cost Sk656 million, the SITA newswire wrote.

The ministry said it would give preference to the bid with the best financial terms.

Applicants must ask for further documents on the tender conditions by December 18. The procurer will then shortlist four bidders for further negotiations on these conditions.

The initial tender covers the D1 highway sections from Dubná Skala to Turany, Turany to Hubová, Hubová to Ivachnová, Jánovce to Jablonov, and Fričovce to Svinia. Two other highway construction packages are expected to go to tender later this year or early next year.

Shortly after the tender was announced, Prime Minister Robert Fico said that the PPP tender makes sense because the price will be firmly set.

"It is impossible to elevate the price," said Fico, as quoted by the financial daily Hospodárske Noviny. "No additions are possible, and there is also a fixed term by which the firm will have to wrap up the construction."

But two days after the tender was announced, a major construction player said some documentation was missing.

The technical director of the Doprastav construction company, Dušan Šamudovský, told the Hospodárske Noviny that the tender is technically incomplete and the ministry would likely have to announce a new tender or complete the tender.

Ministry spokesman Marián Janošik said that the ministry met all the legal crietia for announcing the tender, and submitted the complete documentation to the European Public Proccurement Journal on November 14.

The tender announcement that appeared in the EU Official Journal on November 20 already contained the information that was missing on November 17.

Ivan Šesták, chairman of the Doprastav board of directors of and president of DDM Group, declined to comment on the shortcomings of the tender, telling The Slovak Spectator that the company would address this issue with the authorities, not through the media.

However, he confirmed that his company will participate in the tender.

Another major player, Skanska, has also confirmed its interest in applying. It has been involved in PPP highway construction in Finland, Norway, Chile and Poland.

"Skanska Infrastructure Development for Central and Eastern Europe has been monitoring the projects being prepared in the region, including Slovakia," Skanska spokeswoman Magdaléna Dobišová told The Slovak Spectator. "This market is certainly interesting for us and we will take part in these tenders."

The cabinet is expected to approve the plan in late November.

Failing to approve the PPP projects might result in major delays to the government's highway plans, said the ministry, according to the SITA newswire.

In late October, the government proxy for road infrastructure construction, Igor Choma, announced that Slovakia would pursue its 151-kilometre plan despite the Finance Ministry's warning that 95 kilometres would be more realistic. The cost of building 151 kilometres of highway is estimated at Sk130 billion.

"We are continuing the preparations as originally planned," Choma told the press.

The Transportation Ministry said in a statement that proceeding with private partners would help the project now and over the long term.

"A motivated private partner is able to build the road infrastructure faster and more effectively, and operate it through the whole lifespan of the project," an official document said.

However, an earlier Finance Ministry report suggested that covering 151 kilometres of highways through PPP projects might be risky.

Carrying out the highway and speedway construction plan approved by the cabinet would double the Transportation Ministry's share of budgetary expenses, which would considerably narrow its scope for financing other projects, the Finance Ministry wrote in its analysis.

It seems unlikely that the proposed PPP model would have an impact on the state deficit and debt, but it is impossible to say for sure, the ministry said. The final impact could only be assessed based on the final contract with the private investors.

To keep inflation risks down, the Finance Ministry recommends carrying out smaller projects at a slower pace. It proposes dropping the third PPP project package, as well as the Dubná Skala-to-Hubová section of the first project package.

"The main role of the Finance Ministry is managing budgetary policy and financial stability," ministry spokesman Miroslav Šmál told The Slovak Spectator. "We will have to wait for actual bids, but the ministry can make recommendations so that these bids have a minimal impact on public finances."

For the initial tender package, each bidder must prove that it has had experience with PPP road infrastructure projects between 1999 and 2007, and that it held a stake of at least 30 percent in the voting rights of the companies involved. Each project must have had at least one construction, operation and maintenance component, and total costs of at least €100 million. Applicants also must prove they can secure project revenues of €1.2 billion for each of the next three years, and have a share capital of about €800 million, according to the procurement notice in the EU Official Journal.

The ministry expects to announce the tender for the second package, a 47-kilometre stretch of the R1 dual carriageway between Nitra and Tekovské Nemce, in early December at the latest. Its estimated value is Sk16 billion, excluding VAT.

The tender for the third package includes the most technically-demanding sections over 29 kilometres of the D1 highway between Žilina and Martin. It should be announced next year and might demand Sk39.8 billion, SITA wrote.