A PETITION against the planned construction of a wind power park in the neighbouring towns of Vráble and Telince has been signed by about 700 people so far, the Sme daily wrote on October 22.
CE-Energy company intends to spend Sk1.3 billion (€38.9 million) to build the wind farm, with seven turbines in Vráble and five in Telince. 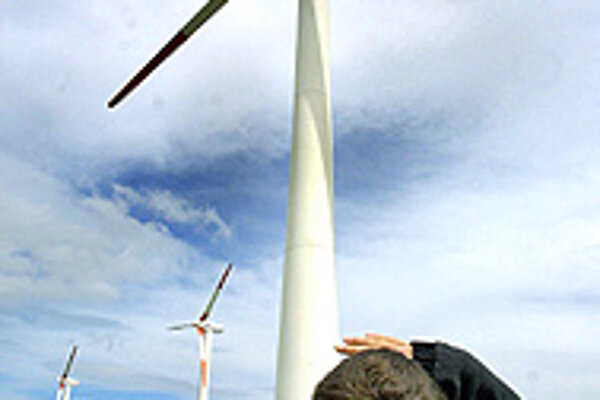 Font size:A-|A+
A PETITION against the planned construction of a wind power park in the neighbouring towns of Vráble and Telince has been signed by about 700 people so far, the Sme daily wrote on October 22.

CE-Energy company intends to spend Sk1.3 billion (€38.9 million) to build the wind farm, with seven turbines in Vráble and five in Telince.

"It is not huge," Vráble Mayor Tibor Tóth said. "The turbines here will take up two-and-a-half of hectares of agricultural land.

"When we get the petition, we will deal with it duly. We will weigh the opinions of public bodies, we will find out how it could influence the environment - and then we will take a stand."

The closest turbine is expected to stand one kilometre away from residents' homes.

"The minimum distance should be up to three kilometres," said Peter Mičech of the petition committee.

According to Mičech, the wind farm, would be a blight on the countryside.

"It is suitable for a shoreline, or for a desert, but definitely not for a town," he said. "Moreover, Vráble lies in the buffer zone of the Mochovce nuclear power plant, which makes such a big construction project impossible.

"The project is being discussed on the town's websites," he continued. "Environmentalists insist that wind parks are traps for birds and bats."

The town would get Sk1 million annually for operating the farm.

"In Telince, the support for the project is quite big," said Deputy Mayor Imrich Vozár. "There are some voices against it, but these are from various interest groups, like hunters."

But wind farms are a welcome concept elsewhere in Slovakia. Banská Bystrica's Wind Energie company is expected to start construction on at least 12 wind turbines near Šurany this year, the ČTK newswire wrote in early August. The wind farm will be built between the communities of Podhájska, Radava and Vlkas.

The investment, worth more than €50 million, will be financed by the Swiss UBS bank. Wind Energie is connected to the Austrian Ökoenergie Beteiligungs company from Obersdorf.

In exchange for letting it build the 100-metre turbines, the investor will reimburse the communities for the cost for public lighting. It will also pay Vlkas Sk200,000 a year in rent, Mayor Imrich Slovák said.

Each turbine will produce more than two megawatts of energy. Seven of them will stand in Vlkas, three will be built in Podhájska, and at least two will be in Radava.

Wind Energie CEO Milan Melišek says the company has already signed another contract with local governments about the location of another wind power plant, this time near the village of Demandice in the Levice District. It would house 23 wind turbines.

Interest in wind energy has been growing in Slovakia. At the end of last year, the Austrian Bewag company announced its plans to invest in these facilities in Slovakia. It has already tipped locations in the districts of Lučenec, Žiar nad Hronom, Zvolen and Krupina, where it would build and operate a total of 100 turbines.

There are currently three wind farms in Slovakia, with a total of nine turbines and an output of five megawatts, the SITA newswire wrote in May. In the neighbouring Czech Republic, the output from wind energy is 50 megawatts. In Hungary it's 60 megawatts, in Ukraine it's 80 megawatts, in Poland it's 150 meagwatts, and in Austria, it's more than 1,000 megawatts.

In Germany, wind turbines produce more than 20,000 megawatts of energy.

FUEL briquettes for fireplaces and boilers made from straw and hay are emerging as an alternative heating fuel in Slovakia.

Until now, this bio-mass fuel could be burnt only in bigger, specialised boiler-rooms.

The heating value and price of this fuel is comparable with brown coal, but it has the added advantage of being cleaner to handle, straw briquette producer Peter Zmeček told the ČTK newswire.

About two million tonnes of straw that is suitable for burning is available each year in Slovakia, he said.

"Three to five tonnes of straw can be yielded from one hectare of soil," Zmeček added.

Briquettes are best produced by combining straw with another organic product, such as sawdust or hay, because straw alone tends to burn poorly in lower temperatures, and leaves a lot of ashes, he said.

"The sale price of the fuel is then about four crowns per kilogram," Obtulowitcz said.

It is not just farmers who have started making straw briquettes, he said - this enterprise is also profitable for businesses that buy the straw from farmers.

Specialists estimate that more than 1.8 tonnes of straw can be used for heating each year without affecting agricultural production. (Straw is used for bedding cattle and other farm animals.)

Straw from rapeseed, corn and other plants can also be used for heating briquettes. About 2.5 kilograms of bio-mass equal one cubic metre of natural gas for heating.

SINCE November 8, a primary and nursery school in the village of Borša has been heated by a geothermal spring.

The school in southeastern Slovakia, attended by 204 children, got rid of coal and replaced it with geothermal water, with a temperature of 31 C. The municipal office set up the heating supply for the school.

"Last year we filed an application with the Environmental Fund, and we received Sk5.3 million for this project," Mayor Ján Juraj Bystránsky told Slovak Television. "On top of that, the community had to fund another five percent through grants."

The school is glad to save the money, and the boilerman - who used to put 70 tonnes of coal into the stove - enjoys the modern technology.

"It is much, much better than it used to be," said boilerman and school caretaker Štefan Bajusz. "There is not so much work, so much dirt . . ."

"We hope that by saving the money, we can build a swimming pool, install thermal insulation in the school, and build the missing gym, of course," said school principal Renáta Lukáčová.

The village wants to find other ways to use its geothermal spring. The Rákoci mansion is expected be heated in this way soon.

The mayor is also considering an outdoor pool, which would draw much hotter water from a second bore-hole. The modern thermal swimming pool could be finished by 2009, Bystránsky said.

Slovakia is one of the top countries in Europe for geothermal energy thanks to its natural conditions, the Hospodárske Noviny daily wrote.

Experts estimate the country's hot underground waters have an energy potential of more than 5,500 megawatts, and about half of that is technically available.

But only a tiny part of it is being used now - mostly in swimming pools and spas, and to a smaller extent in energy and industry.

The pioneer in using geothermal energy for industrial purposes is the Slovgeoterm company, which has completed several projects through its affiliated companies and with the help of Icelandic experts. In Galanta, the company heats more than 1,000 flats and a hospital with geothermal energy.

The use of hot water is in high demand in the southwest of the country, near the Tatras and in the east. Big geothermal projects are on the horizon in Prešov, Olšava, Stará Ľubovňa, Topoľčany, Lučenec and Michalovce.

The CEO of the Czech ČEZ, Martin Roman, says the negotiations with the Hungarian MOL petrochemical group will likely wrap up by the end of this year. Construction on the combined cycle power plant, which creates energy from water and natural gas, should start in 2009. The steam-gas project at Slovnaft, a MOL affiliate, would seal the Hungarian company's partnership with ČEZ. The two companies would create a joint company for the project, and work together on a similar project at MOL's home refinery in Budapest.

The power plant at Slovnaft would be the biggest of its kind in Slovakia. It would have an installed capacity of 800 megawatts of energy, which is about 10 times more than the newest steam-gas plant in the country, opened several weeks ago by Slovintegra Energy in Levice.

The Slovnaft plant would be twice the size of the one that energy giant E.ON plans to build in Malženice, near Trnava.

"The cost of quotas for carbon dioxide emissions will get higher and higher," he said.

The Makal company is also building a steam-gas cycle in Želiezovce worth €100 million (Sk3.3 billion). It should be completed by 2009.

Small investors are also interested in this form of energy. The Slovak-Luxembourgian Alfa Power company has started building a steam-gas mini-processor near Žilina that can produce 40 megawatts of energy. The Economy Ministry expects the new steam-gas facilities to increase the country's consumption of natural gas in the future. It is almost completely supplied from Russian imports now.

The oldest power plant using water and gas is in Bratislava. The newest is the Solvintegra Energy plant in the Levice-Géňa industrial park.

RESIDENTS of Slovakia's Turiec region have the first communal hydro-power plant in Slovakia.

The plant has been under construction in Necpaly, near Martin, for three years, and more than Sk3 million (€89,700) was invested in its construction.

The village expects to get a return on its investment within five years. The project can help the village save on power costs, the Nový Čas daily wrote.

People from Necpaly are proud of their power plant, which launched this summer.

"It is splendid, we can save the money for the power," gushed Ľubica Oravcová, 39.

The village will save Sk150,000 a year on public lighting alone.

The plant produces 160,000 kilowatt hours of power a year, which adds up to more than half a million crowns in current prices.

Necpaly intends to build more small hydro-electric power plants by the end of this year.

"We will try to finance other projects from European Union money," Mayor Peter Majko said. "But first we will test the effectiveness of this Slovak patent."

Currently there are about 160 small hydro-power plants working in Slovakia, but the potential for this energy source is much bigger. Only about 11 percent of rivers suitable for hydro-electric power plants are being used, Slovak Television reported.