Have Fico and Mečiar crossed the Rubicon?

THE TENSIONS between Smer leader Robert Fico and Movement for a Democratic Slovakia (HZDS) boss Vladimír Mečiar finally erupted into an open conflict, as both leaders spoke publicly about breaking up the ruling coalition. 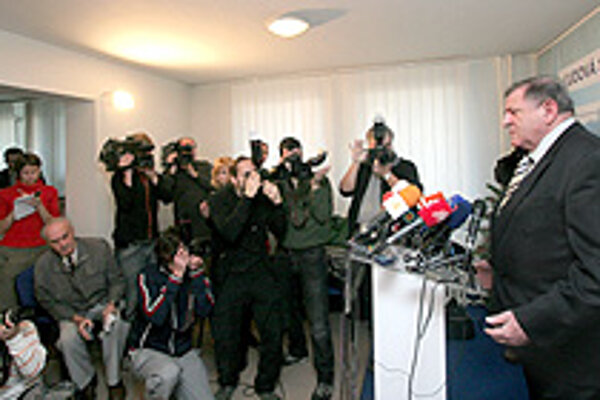 THE TENSIONS between Smer leader Robert Fico and Movement for a Democratic Slovakia (HZDS) boss Vladimír Mečiar finally erupted into an open conflict, as both leaders spoke publicly about breaking up the ruling coalition.

But a day later, on November 29, Mečiar told the media that the tough talk was actually just a miscommunication.

The coalition crisis had appeared to be coming to an end: a new agriculture minister, Zdenka Kramplová, replaced her HZDS colleague, Miroslav Jureňa, who was sacked over a scandal in the ministry-controlled Slovak Land Fund; and Speaker of Parliament Pavol Paška, a Smer nominee, survived a non-confidence vote in parliament.

But only a couple of hours after Kramplová’s appointment, the conflict re-emerged with even more intensity.

Smer, the HZDS and the Slovak National Party (SNS) met on November 28 to iron out the issues that led to Jureňa’s sacking and the related tensions. But after 10 minutes, Mečiar stormed out of the meeting and told the media that Prime Minister Robert Fico was trying to kill the coalition.

According to Mečiar, the prime minister said he was in favour of verifying the origin of suspicious properties and reopening the issue of amnesties granted by Mečiar in 1998, when the HZDS head was prime minister.

As acting president, after the term of Michal Kováč, Sr. ended and a new president had not yet been elected, Mečiar granted amnesties related to the abduction of Kováč’s son to Austria.

After Mečiar’s fiery departure from the coalition meeting, Fico also addressed the media and poured more fuel on the fire.

Some HZDS members, particularly the ousted Jureňa, responded verbal attacks against Fico. According to observers, Jureňa talked about an apartment that Fico was rumoured to have received from the Ikores company, which received state contracts worth billions of crowns from the Defense Ministry.

But the next day, Mečiar told the media that the ruling coalition would continue, and that the blame game was the result of a miscommunication.

“Fico is a child of fortune,” Mečiar said. “He does not have an opposition and the chairmen of the coalition parties do not have (leadership) ambitions.”

According to Mečiar, the core of the problem was that aside from Smer, none of the chairmen of the ruling coalition parties are members of cabinet, so neither Slota nor Mečiar have been at cabinet sessions while Fico has had a decisive impact on its decisions. The ruling coalition has not met often enough either, but meetings will become more frequent now, Mečiar said.

In this one instance, Mečiar is right, political scientist László Öllős said.

“The main problem, however, is that (the coalition leaders) are all strong personalities, and all the three parties are to a great degree leader-oriented parties, especially the HZDS,” Öllős told The Slovak Spectator.

The parties also have a similar voter base, so the smaller parties need to diverge from the larger party – Smer – from time to time, Öllős said. That can only be done if they have differing opinions and take different stands, he added.

“Combined with the fact that there are strong leader figures in the ruling coalition, this breeds conflicts from time to time,” Öllős said.

Fico started digging into the land scandal problem, hoping that he could lure voters from the HZDS, and threatened the long-term existence of the coalition, which was almost fatal for Mečiar, Öllős said. In return, Mečiar started pointing to Smer’s responsibility in this case and its involvement in scandals at other ministries, which did not result in consequences for any other minister.

“A certain status quo of powers emerged,” Öllős told the Spectator. “Nobody wants early elections, so it was necessary to define the rules of the game for the coming days and months. Most probably they have done it.”

But political scientist Samuel Abrahám said the Fico-Mečiar feud is beyond repair. He said the two leaders might have come to an agreement on the surface, but the problem has not been solved and it’s only a matter of time before another conflict arises.

The main turning point was Fico mentioning the amnesties granted by Mečiar, he said.

“Mečiar’s amnesties were an absolute turning point in the whole case, and they meant a definite clash between Fico and Mečiar,” Abrahám told The Slovak Spectator. “Mečiar’s amnesties have had the greatest burden on the Slovak political scene since 1989.”

“There is no compromise,” Abrahám said. “If the prime minister insists on annulling the amnesties, Mečiar would probably be finished.”

Abrahám also said that Fico has crossed the Rubicon by humiliating Mečiar, and there is not much chance that they would manufacture an agreement.