SPEAKER of Parliament Pavol Paška has survived an attempt to have him fired. Fifty-nine MPs voted to oust the speaker, a member of the ruling Smer party, in the non-confidence vote, and 76 voted against it. Six opposition MPs voted against the proposal, which was brought forward by the opposition. 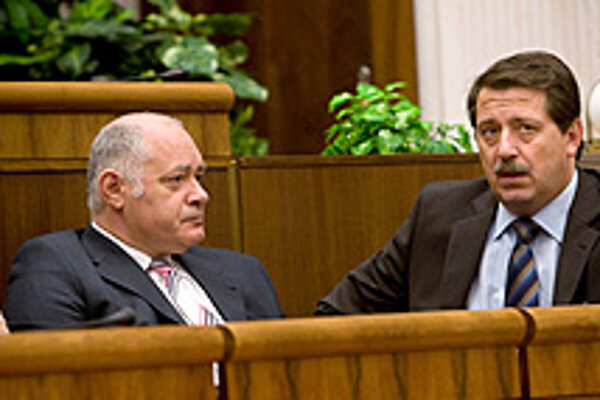 SPEAKER of Parliament Pavol Paška has survived an attempt to have him fired.

Fifty-nine MPs voted to oust the speaker, a member of the ruling Smer party, in the non-confidence vote, and 76 voted against it. Six opposition MPs voted against the proposal, which was brought forward by the opposition.

The opposition tried to have Paška recalled because he gave the order to put the Act on Social Insurance on the parliamentary website in a different wording than the one approved by MPs.

“The effort to change the wording of the act is a precedent that has not been seen since the Slovak Republic started to exist,” said Daniel Lipšic of the Christian-Democratic Movement (KDH).

Paška defended himself by saying that MPs passed a procedurally incorrect wording, as two clauses of the bill contradicted each other. He added that he would do it again.

“The government praises the cooperation with the parliament under the leadership of Pavol Paška,” Fico said. “He did not commit any act that would breach the Slovak constitution. The Slovak government considers the reasons stated in the proposal for his dismissal unjustified.”

Fico said Paška was not to blame for the parliamentary chaos around the bill. Instead, he blamed the opposition – specifically MP Iveta Radičová of the opposition Slovak Democratic and Christian Union (SDKÚ), who submitted the impossible amendment that was later passed by the MPs.

After his address, Fico left the parliament.

The ruling coalition Movement for a Democratic Slovakia (HZDS) supported Paška. Earlier, some HZDS MPs threatened to take revenge against Smer for Fico’s firing of its nominee, Miroslav Jureňa, as agriculture minister.

“I do not think any more that this coalition is the only right thing,” HZDS chair Vladimír Mečiar said a few days before the vote. “And I do not think either that it will last for the whole four years.”

Fico’s statements on November 23 were even stronger.

“It is really very bad, and I really feel very sorry that because of the scandals, Mr. Mečiar is dragging his whole party, and his electorate, to the opposition as some kind of punishment,” he said.

Jureňa was fired over a scandal involving the Slovak Land Fund, which falls under the jurisdiction of the Agriculture Ministry.

“The HZDS, if it wants to continue in current ruling coalition, can only continue in it by adhering to the government’s agenda from now on,” Fico continued. “There is no other way. No conditions, no requests, nothing like that can corner us.”

On the day of the non-confidence vote, Ján Slota, the chairman of the coalition Slovak National Party (SNS), refused to call the situation a coalition crisis in parliament. He said a crisis will start when shooting breaks out, like in Kosovo.

“I think we are still far from that,” Slota said.

Although political observers did not expect the HZDS to support the opposition’s attempt to recall Paška, they agreed that the tension in the relations in the current ruling coalition hasn’t subsided.

Political analyst Grigorij Mesežnikov, president of the non-governmental think-tank Institute for Public Affairs (IVO), told The Slovak Spectator that the relationship between Fico and Mečiar has not been flawless from the beginning. The reason is that Fico had one condition when he put together the coalition – Mečiar must stay without any ministerial position.

“Not much has changed; the recalling of Jureňa and the subsequent recalling of Paška just uncovered the problems between the two of them,” Mesežnikov said.

After the amendment to the law on social insurance was passed on October 30, Paška ordered the parliamentary legislation department to omit the provision proposed by Radičová, which was approved by MPs, from the final version of the law. Radičová’s amendment directly contradicted the proposals of Labour Minister Viera Tomanová, which were also approved by parliament.

The version of the law with Paška’s edits was published on the parliamentary website, even before it was sent to President Ivan Gašparovič for approval. (In Slovakia, any law approved by parliament must be signed by the speaker and the president before it comes into force.)

Paška later included Radičová’s provision in the law he presented to the president, and Gašparovič sent the contradictory draft back to parliament without signing it. Parliament later approved a revised version.

But because Paška left out the provision in the first place, the opposition parties said he broke the rules of democracy and should no longer serve as speaker.

“This is a manipulation of democratic rules,” said SDKÚ chairman Mikuláš Dzurinda.