A ONE-ROOM apartment in a dilapidated concrete block of flats in Bratislava’s Petržalka district, the most visible part of the legacy of socialist urban planning, might cost twice as much as it did five years ago. 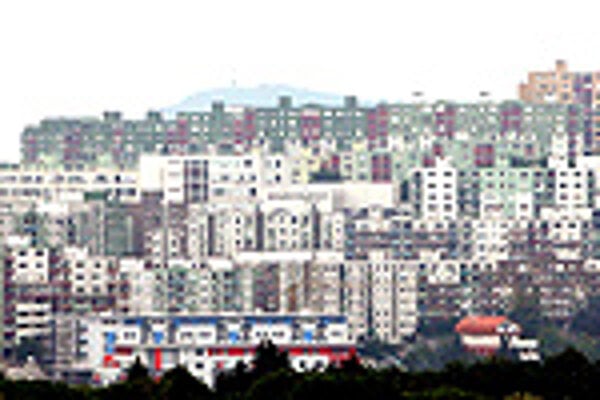 A ONE-ROOM apartment in a dilapidated concrete block of flats in Bratislava’s Petržalka district, the most visible part of the legacy of socialist urban planning, might cost twice as much as it did five years ago.

Predictions that new housing projects would dramatically push down prices for older flats in areas that locals call “concrete jungles” have not yet come true.

Apartment prices rose dramatically during the third quarter of 2007. The average price for a flat or house reached Sk38,728 (€1,160) per square metre, a 25.4-percent increase from the third quarter last year, the National Bank of Slovakia reported.

Real estate prices have shot up 117 percent since the third quarter of 2002, according to the central bank, which monitors real estate prices with the National Association of Real Estate Agencies (NARKS), the SITA newswire wrote.

Economic growth, swelling demand and more available loans and mortgages are pushing up the prices, NARKS general secretary Martin Lazík told The Slovak Spectator. One of the most significant factors behind the climbing apartment prices is that the demand far exceeds the supply, said Filip Žoldák, research manager with the Lexxus real estate agency. That is why there are waiting lists for apartments, making it possible for the developer to increase prices at any phase of the project, he said.

Other factors driving up prices are the rising standard of living and the increasing costs for construction materials and labour, said Daniela Danihel Rážová, director of the Bond Reality real estate agency.

While Bratislava has traditionally been the most expensive place to buy real estate, housing prices have swelled in other regions since mid-2007. Market watchers say Bratislava inflated its prices quite dramatically a couple of years ago, so price hikes there are not as visible as in other regions.

Prices are growing the fastest in the developing areas where there are foreign investments. In these places, it is assumed that employees will follow, along with improving living standards, the growth of real wages and the drop of unemployment, Žoldák told The Slovak Spectator.

For example, Žilina and Trnava saw this kind of growth, he said. Žilina is the new European home of Korean carmaker Kia, and Trnava now houses the French carmaker PSA Peugeot Citroen.

“In terms of percentages, prices in places that had fallen behind before, such as Prešov, Banská Bystrica and Zvolen, are growing at a fast pace now,” Lazík told The Slovak Spectator.

Still, people have to reach the deepest in their pockets when paying for Bratislava real estate – it costs an average of Sk51,803 per square metre, which exceeds the national average by a third. Prices rose 21.6 percent year-on-year in the Bratislava region during the third quarter.

Are concrete blocks worth millions?

According to Žoldák, apartment prices have climbed even in less attractive locations.

A three-room apartment in Bratislava’s suburbs that cost approximately Sk35,000 per square metre in January has been selling for at least Sk42,000 more in the second half of the year, according to market watchers.

Last year, an older reconstructed three-room apartment cost about Sk2.5 million in a Bratislava suburb. In late November, sellers could confidently ask more than Sk3 million for the same flat.

“It is uncertain how long the prices of the old apartments will keep climbing,” Žoldák said. “But the concrete block of flats cost less than brick houses or newly-built apartments.”

The overall shortage of apartments in all segments fuels the growth of prices for both old and new apartments, Žoldák said.

Lazík said he expects that after a certain time, apartment prices will be more closely linked to quality and location.

“Prices of the older apartments will certainly dramatically drop, in my opinion, the same way it happened in Prague,” Rážová told The Slovak Spectator. “However, no one can tell for sure whether it will happen in a year, two years or three years. The speed of the drop of prices of old apartments will be influenced by how fast the mass construction of new, mid-range apartments develops.”

Speculative traders, who buy up real estate in order to sell the apartments for good prices when the market offers the best conditions, have also been influencing the prices, professionals said.

“The so-called speculative traders buy the apartments because the prices are climbing, so they reduce the number of apartments that are available and push up the demand, supporting further growth,” Žoldák told The Slovak Spectator.

However, they also said that the residential real estate market in Slovakia is transparent and comparable to the Czech Republic or Hungary.

“Investing in real estate has become an understandable and transparent investment for Slovaks, which they trust more than, for example, financial products,” Rážová told The Slovak Spectator. “The culture and approach of apartment owners to their tax duties has been increasing. So did their access to information on their duties and rights.”

Lazík of NARKS agrees that the real estate market is transparent in Slovakia.

“If there are more ‘investment purchasers’ in the future, their behavior would become an important factor and influence on the real estate market,” he added.