‘Music is the greatest textbook’

SOŇA Püšpökyová’s 11-year-old students are in clear agreement on the best part about their English lessons. “Singing” was nearly a unanimous choice when I asked them what they liked best. 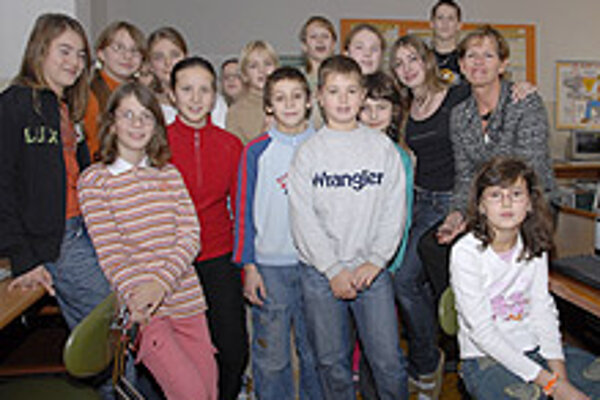 SOŇA Püšpökyová’s 11-year-old students are in clear agreement on the best part about their English lessons. “Singing” was nearly a unanimous choice when I asked them what they liked best.

“Sometimes they insist on staying in the classroom after the school bell rings and singing a song,” said Püšpökyová, the principal of the elementary school on Tbiliská Street in Bratislava. “They do not even notice the English lesson is over.”

Püšpökyová was recently named a European Language Teacher of 2007 for Slovakia by the Education Ministry and the European Commission. She is convinced that children can learn the language the best when they do not actually realise they are learning it. Games, contests and songs are the best way, she says.

It is not necessarily the perfect knowledge of a language that makes a language teacher good, Püšpökyová said. It is also the method of teaching. Teachers need more opportunities to continuously improve both their methods and their language proficiency, she told The Slovak Spectator in an interview.

The Slovak Spectator (TSS): When do you think is the best age to start learning English?

Soňa Püšpökyová (SP):I am a proponent of learning a foreign language at an early age, in kindergarten (up to six years old). However, it should not be as a special lesson with a special teacher who, for example, comes to kindergarten once a week to have an English lesson with kids no matter what the is weather like, what they did before and what they will be doing next. This teacher might have a special English certificate, but he or she does not know the kids, does not know how to teach them.

We have many clever teachers in kindergarten who spend all day with children. They do many things but, unfortunately, they do not teach English. And they could do it and it would be much more natural for the kids than having a special lesson.

The teachers who are with the children all the time could serve them basic English when it is natural for children, in small amounts of, let’s say, 10 minutes. When they put on clothes or when they do exercises, they could easily learn English words for clothes or the parts of the body. The kids would learn basic English words spontaneously.

In fact, I would love to start a project like this. I recently met the principals of some kindergarten schools. I would like to take one or two teachers from these kindergartens who speak English and train them this way. I would like to do the same thing with teachers at our school in school-clubs (after-school supervised programmes). The kids would work with the English language but they would have no extra lessons or subjects.

TSS: Some parents would prefer introducing the English language to their children right away, starting from the first year of school at the age of six.

SP: Well, yes, some parents want us to have the English language as a lesson in the first grade. But I said no. In the first grade, we just have other plans for the children. We have to train them gently, to teach them to write and read, to give them enough physical exercise. We just do not need extra lessons for them.

It would be another thing if a teacher in primary school (the first five grades, for children from six to 10 years old) had passed their state exams in the English language and he or she would be able to incorporate English into their existing lessons. When students have math class and they learn to count to 10, they could easily do it in English as well. Why couldn’t they just say that in English, it is called adding and subtracting? They could easily learn such things as, ‘quiet’, ‘hands up’, ‘slowly’. And again, it would be spontaneous and natural. Children would remember that for their whole life.

And we do not have to expect primary school teachers to have the English knowledge of a professional interpreter. Of course, he has to be sure about basic grammar, because when a kid learns once that the plural of mouse is mouses, it will be extremely difficult to teach him later that it is mice.

TSS: How is it done in other European countries? Can we draw experience from other countries?

SP: I saw this kind of continuity in Norway. And it works. In Norway, everyone in any profession can speak at least basic English. When I took part in Socrates (EU education programme) programme and I was in Norway, I had no problem speaking in English with children in the first grade. And it was because a teacher taught them English, not as a special individual subject.

Or Austria. They could make do with German, at least in the region of Central Europe. But they take the English language very seriously and they consider English not as a foreign language, but as a second language necessary for life.

On the other hand, I do not like when we just copy everything from other countries. Currently, the EU is being mentioned everywhere. Now everything must be done as the EU wants it, but not everything it wants is perfect.

TSS: How do you perceive the quality of language teachers in Slovakia? Knowing a foreign language can be commercially attractive. Can schools support enough people to speak and teach English?

SP: Well, the situation is not rosy. I get phone calls from other schools almost every day asking whether I have an English teacher. We are lucky. Our team is quite stable, which proves that it works well here.

We only hope that some of those who graduate will go on to teach in schools. However, when we get the teachers into the schools, we do so little to educate them further, to create opportunities for them to improve. And this cannot be done by schools alone. They need help from the state.

There are so few opportunities for teachers to improve themselves. There are pedagogical centres but they are not doing enough. Activities that would bring teachers together, where they could exchange their experiences, are also missing.

TSS: You talk a lot about methods of teaching. What are the methods that work in teaching languages?

SP: Kids are kids. If you just sit them at desks, you just make them read, translate and write, they get killed very quickly.

For me, music was the greatest English textbook. It is the same with kids. We start and finish the lesson with a song. Now we are singing Lemon Tree by Fool’s Garden. It is a great song and the children knew the song after three days. Their pronunciation got so much better and they feel much more confident. We are not translating songs word by word, we just say what it means, that is enough.

The children love switching activities. One moment we sit by a piano, another on the carpet, and one moment we have a contest. When we learn parts of the body, we have little stickers with body parts written on them and when I say a body part the kids put the sticker where it belongs. Elbow to elbow, eyelash to eyelash. Very often we go through the whole school and we are learning what it is to go downstairs, upstairs, what a hall is. When we learn animals, we have a whole box of plush animals, I throw the animals to kids and they say the name of an animal they catch. Kids have enormous fun and they simply do not have the feeling that they are learning.

To be honest, I do not stress writing so much. When we focus on writing, sometimes we miss something more important, and that is speaking. It is important to give a kid as much vocabulary as possible. The older the child, the greater the barriers her or she has in speaking. We must give him confidence in speaking now.

TSS: How important is staying abroad for learning the language?

SP: Our school has made contact with a school in north Devon that offers something called the Service for Open Learning for countries of Central Europe. Every year since 1993, 20 to 30 children go there for two weeks. The kids have lessons in the morning with English teachers, in the afternoon they go sightseeing with an English guide, and then they go alone to English families. There is fear and tears for the first two days, but after that the kid suddenly says, ‘Oh, I forgot what it is called in Slovak.’ The parents pay for it, and it is true that not all of them can afford it. However, it is a great opportunity.

Moreover, we have always had at least one native speaker teacher or lecturer in our school since 1993. It is very important for children to hear authentic English, to get the confidence in the language.

TSS: Finding English native lecturers was the reason why you got the award.

SP: Yes. For the award I was nominated by the mayor of Rača (a district of Bratislava) and the school, with the support of the parents’ association.

Having English lecturers was completely an initiative of our school. After the Velvet Revolution I got this motivation that now I could do something. We succeeded in getting native speakers through the same programme, Service for Open Learning. We were prepared to go through all the red tape and immigration offices, to set up accommodation and boarding for them, just to have them here.

- Comenius University in Bratislava – Slovak as a Foreign Language programme