In summer 1999, Slovakia's sole shipyard, Slovenské lodenice Komárno (SLK), ran into financial trouble following the Kosovo crisis, claiming bombed-out bridges from the NATO strikes against Serbia had prevented it from delivering ships to customers lower down the Danube River. A few months later SLK laid off employees and failed to repay its loans to banks.
But as time went by, the problem was found to have been much more in mismanagement than in obstructed river traffic. 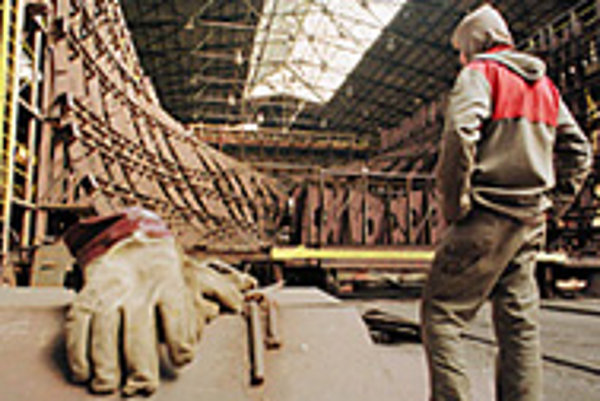 Font size:A-|A+  Comments disabled
In summer 1999, Slovakia's sole shipyard, Slovenské lodenice Komárno (SLK), ran into financial trouble following the Kosovo crisis, claiming bombed-out bridges from the NATO strikes against Serbia had prevented it from delivering ships to customers lower down the Danube River. A few months later SLK laid off employees and failed to repay its loans to banks.

But as time went by, the problem was found to have been much more in mismanagement than in obstructed river traffic.

The recall of the SLK board of directors in October 2000 and the subsequent initiation of criminal proceedings through the tax office against SLK's former chairman and two other board members revealed that the company's liabilities were far higher than its assets. SLK's new management has said that it is now only a question of days before the firm declares bankruptcy.

The dire situation at the shipyard has been mirrored at many other Slovak companies. At the east-Slovak steel mill Vychodoslovenské železiarne (VSŽ), recently acquired by US Steel, new managers voted in by shareholders in late 1998 discovered a mountain of debts which they blamed partly on acquisitions made by former management, including the purchase of the Sparta Prague football club. The new managers found many parts of the VSŽ 'empire' a hard fit with a company geared towards steel manufacturing; the former management of Alexander and Július Rezeš was held to blame.

Such examples of mismanagement, analysts say, have occured at an estimated 30% of Slovak companies, which are indebted and were privatised during the first and second waves of privatisation under the government of Vladimír Mečiar in the mid 90s. Primarily as a result of this situation and the subsequent cult of mismanagment that grew up around these firms, experts add, it will take four years for Slovakia's corporate sector to catch up with those of neighbouring states.

"Most of the companies which are suffering from illiquidity now are those in which company managers are also owners. They would declare their companies bankrupt rather than hire qualified managers who understand what a company needs, and leave its running to them," said Karol Balog, director of the Agency for Industrial Development and Revitalisation (AIDR).

According to Balog, unhealthy companies often lack qualified management and have owners who have little concern for the company's development. He believes that one third of Slovak companies find themselves facing financial difficulties precisely because their owners want to both own and have full control over their companies.

"Just look at SLK. There has been a fight to control the company for a long time. The old management was far from qualified, and the new one hasn't been much better. Both were interested only in gaining control over the company [not its development]," the AIDR chief said.

Research carried out by the Slovak consultancy firm Transfer suggests that 40% of managers in Slovak industry are not qualified, by their criteria, and are unable to be re-trained and accept new trends in the global economy. According to Transfer's Pavol Boroš, criteria defining successful managers which Slovak executives failed to meet included, "an ability to make decisions based on collective discussions, to motivate employees, and to find practical solutions for problems".

He added that many of these incompetent managers were nominated to their posts during the second wave of privatisation under Mečiar's government in the first two years of his 1994-1998 term in office.

"If there had been a tender called for managers of these companies," Boroš continued, "half of the managers wouldn't have been left in their positions. There is little chance that politically nominated managers who often bought companies for a very low price were the most talented managers in Slovakia."

Paul Binder, deputy managing director for the executive search firm Target, said that many Slovak managers were self-styled, possessing their own personal, and often ineffective, approach to management. "About 70% of Slovak managers could never work for international companies, because they don't plan their decisions in advance, don't accept collective opinion differing from their own, and have a very ad-hoc way of approaching management. It's basically an authoritative way of doing business," Binder said.

Analysts say that with more foreign investors coming to Slovakia, ownership structure in companies will change, with many firms initially appointing foreign managers but later bringing in domestic management staff. Talented Slovak managers would be trained and given the chance to replace those discovered to be inefficient and resistant to new ways of approaching business.

There are a few cases of Slovak managers who have already gone through this process and now head branches of succesful foreign companies in Slovakia. Martin Ciran, general manager of Whirlpool Slovakia, and former head of Slovak washing machine and boilers producer Tatramat Poprad, is one such example.

Ciran said that the most important thing for any manager to understand is new philosophies and trends in business, which can often be learned only from more experienced foreign staff. "From the very beginning I understood that the only way forward for Tatramat was to find a strong and reliable foreign partner. Then it was only a question of learning new things in interaction with my foreign colleagues," Ciran said.

The Whirlpool manager added that it might well be difficult for some Slovak managers to switch their attitudes on company management from merely seeing a company as a set of assets to be stripped to something which can be developed. "Managers mustn't have interests different from those they publically air, which sometimes happens," Ciran said.

According to Boroš, many of Slovakia's best managers lack only the opportunity to prove themselves. "We have these people in Slovakia, but they are in lower positions because these unqualified managers have been sitting in the positions [they should have], reluctant to leave them," Boroš said.

The problems with poor management have compounded already existing problems in the corporate sector.

AIDR's Balog explained that compared to neighbouring central European states such as Poland, the Czech Republic and Hungary, Slovakia was now having to face problems with management while at the same time recovering from a recession on world markets and trying to introduce new legislation on bankruptcies to help ailing firms stay productive.

Other countries in the region, he said, had dealt with their management problems four or five years ago when the economic situation in the region was far brighter.

"If we had started with stabilisation in the corporate sector at the same time as these countries, we wouldn't also now have to deal with recession on the markets, which now makes it even more difficult to clean up the sector than it was four or five years ago, when companies didn't have to take it into consideration," Balog said.