It took four days, failed to streamline decision-making and was racked by threatened walk-outs, but the European Union summit in Nice produced a last-minute agreement on the mechanics of eastward expansion that left Slovak delegates delighted.
At 4 a.m. December 11, President Jacques Chirac of France announced that a final face-saving deal had been struck. Chirac, who hosted the meet, said it would "go down in history as a great summit for the variety and the complexity of problems that were solved." 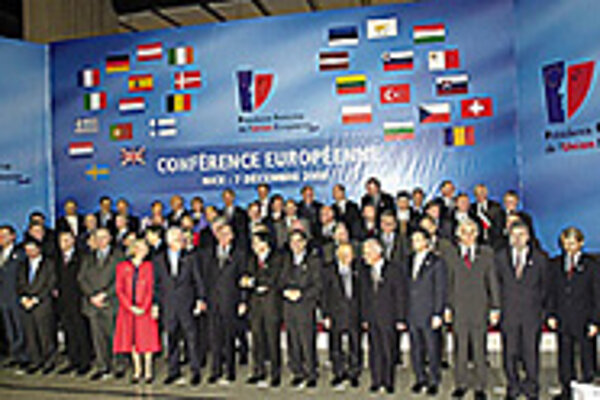 Font size:A-|A+  Comments disabled
It took four days, failed to streamline decision-making and was racked by threatened walk-outs, but the European Union summit in Nice produced a last-minute agreement on the mechanics of eastward expansion that left Slovak delegates delighted.

At 4 a.m. December 11, President Jacques Chirac of France announced that a final face-saving deal had been struck. Chirac, who hosted the meet, said it would "go down in history as a great summit for the variety and the complexity of problems that were solved."

For Slovakia and other 'candidate' countries applying for EU membership, the most welcome news from Nice was that the Union had agreed on how new member countries would be represented in its three main organs - the European Commission, the Council of Ministers, and the European Parliament. With the 'how' decided, Slovak politicians said, negotiations can proceed on who gets in and when.

But with feelings running high at the summit between the French on the one side and the Belgians and Portuguese on the other, observers from non-candidate countries were relieved and encouraged to have an agreement of any kind. Said František Šebej, chairman of the Slovak Parliamentary Integration Committee: "If institutional reform had not occured in Nice, the Swedish presidency would have inherited the problem, and entry negotiations with candidate countries would have been delayed a year or more. Now, for the first time, expansion becomes the main item on the agenda of the EU presidency."

At the moment, the European Commission - an EU 'government cabinet' that proposes policies - has 20 members. Five of the EU's fifteen member states, known as the 'big five' - Britain, Germany, France, Italy and Spain - have two councillors each, the others only one.

The Nice deal suggests that in the event of expansion, the 'big five' would give up a council seat each, with the 12 potential new members each getting a seat when they joined and bringing the Council up to a maximum of 27 members. This arrangement would give Slovakia, for example, equal input in setting the EU agenda.

Slovakia also emerged from the summit with seven seats in the Council of Ministers, the main EU lawmaking body. Once all 12 candidate countries join the EU the Council may number 342 members, up from its current 87, but compared to larger countries, Slovakia will still have above-average representation. "As far as the seats on the Council of Ministers go, we have the same number as Denmark, Finland, Ireland and Latvia," said Slovak Deputy Prime Minister for Integration Pavol Hamžík. "If these countries are happy, why shouldn't we be too?"

Slovakia was also given 13 seats in the European Parliament, which may eventually expand to 738 members from the current 626.

While the date for eastward expansion remains to be set, one foreign policy expert said the institutional reforms approved put pressure on all parties to have the first wave of accessions occur in four or five years' time.

Vladimír Bilčík, an EU specialist with the Bratislava-based NGO Slovak Foreign Policy Association, noted that the next round of European Parliament elections were set to occur in 2004, while the EU was scheduled to select a new Commission in 2005.

"While these are not explicit dates for enlargement, they create a certain pressure - if these institutional issues [Commission, Council and EP membership] are to be settled smoothly, these dates suggest that enlargement might take place at these times," he said. "This puts pressure on both the course of negotiations and the course of domestic preparations in candidate states for European membership.

"The Commission is formed every five years, so the simplest way to accept the first batch of candidate states would be to have them in by 2005, and form a new Commission which includes the new states' representatives. It also seems to me that if a candidate country is not in the first group of states entering the EU, the next most plausible dates for enlargement might again be 2009 or 2010 when you have new EP elections and form a new Commission. I think the first wave is likely to be a larger group, because now there are up to 10 states [including Slovakia] which are relatively advanced in negotiations, and which themselves have set targets internally for entering the EU by around 2004."

But a target date for entry isn't the only bridge that has to be crossed before 2004, said Bilčík. There's also agreement on how wealth should be redistributed inside the EU - "a crucial issue because it involves money and the question of who is going to pay for what" - as well as 'transitional periods' in which candidate countries are given more time to change laws in sensitive areas such as agriculture, and finally tough issues for EU members such as justice and controlling the movement of people across EU borders.

"Agreement in these three areas will largely determine the success of enlargement during the next few years," said Bilčík, adding the date of the first entries would ideally be settled by June 2001.

"I'm a realist - I think enlargement is going to happen, but the question is exactly when, with whom and under what conditions. Agreement on all these things is politically most likely to happen in a few years' time, partly because we have elections coming up in the three large member states - in Britain maybe next year, and scheduled in France and Germany in 2002. New administrations may be more willing to compromise, and we may see deals on these difficult areas by 2003."

Which may allow the EU to keep its promise made in December 1999 at the Helsinki summit of being ready for expansion by 2003. But the Nice agreement still has to be approved by the parliaments of all 15 EU member countries - far from a cinch given the major compromises made by countries such as Germany and the failure of the summit to remove the vetos that large countries have over key EU matters such as taxation, asylum policy and regional transfers.