Airline bitter on eve of sale

The boss of national air carrier Slovenské Aerolínie (SA) has launched a stinging attack on the government just weeks before it plans to close deals with potential buyers for its 34% stake in the airline.
The airline chief has rounded on the government, saying that it has seldom realised the importance of the national air carrier for the country's economic development, and that the upcoming sale of the stake is further evidence of this neglect. 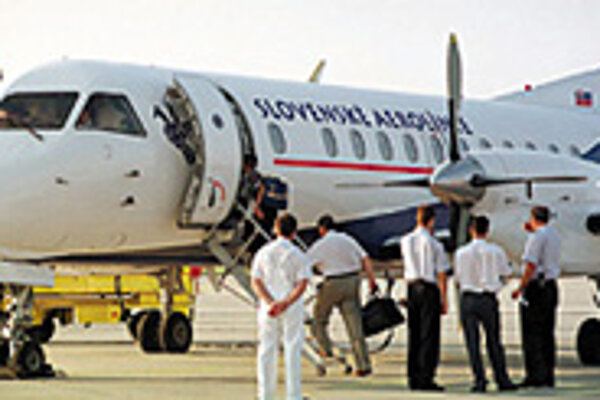 Font size:A-|A+  Comments disabled
The boss of national air carrier Slovenské Aerolínie (SA) has launched a stinging attack on the government just weeks before it plans to close deals with potential buyers for its 34% stake in the airline.

The airline chief has rounded on the government, saying that it has seldom realised the importance of the national air carrier for the country's economic development, and that the upcoming sale of the stake is further evidence of this neglect. He has also claimed that the government has done little to promote the development of air traffic itself in Slovakia, and that once it gets rid of its SA stake, it will have no motivation to remove existing barriers.

"The are only a few national airlines in Europe at the moment where a government doesn't have some stake. The state historically tends to keep some share in a national airline so it can support the development of its air traffic, which in the case of Slovakia should be one of the country's priorities," said SA General Director Pavol Mladý.

Mladý added that the government was not showing the interest in improving business conditions for SA that one might expect of a shareholder, lambasting its decision to sell the stake as economically nonsensical. "From an economic point of view its decision is absolutely ridiculous. Who would sell such a stake during a company's transformation or emergence from a period of trouble, when in one or two years' time he could get much more money for it?" Mladý asked.

The government, following its decision to sell the stake in January 1999 on advice from the anti-monopoly office, has offered existing shareholders Wili Group and the Russian firm Jak the chance to buy the stake. However, if these parties do not express any interest before the beginning of January, the Transport Ministry will announce a public tender for the sale of the share.

Peter Kľučka, the head of office at the Ministry of Transport, Post and Telecommunications, agreed that the government did have a role to play in the company, but argued that this role would be pursued even after the sale of the stake is completed. "The government should support the development of air traffic in Slovakia, and this should happen through our air traffic development strategy, which will be discussed by the government in several weeks."

However, other operators in Slovakia have taken Mladý's side in slamming the government's commitment to the development of domestic air travel.

Ján Kuboši, business director of Air Europe Transport in Poprad, which had at one time been interested in purchasing the government's stake in SA, said: "Just consider the fact that in Slovakia air fuel is the most expensive in Europe. Air carriers have to pay customs for import of aircraft and flight technology as well as pay consumption tax for fuel. In most countries these payments have been cancelled.

"The government probably hasn't seen any chance for the development of SA, and is now going to sell it's stake."

Corporate sector analysts have said that despite SA's criticism, the government may have very valid economic reasons behind its decision to sell, not least of which may be the lack of potential for growth in the sector.

Martin Kabát, head of analyses at Slávia Capital brokerage firm, said that a government usually takes about 50 years to build an airline up to a position where it can sell its stake. "But in this case it might be that the government considers keeping its stake in SA to be worthless. It needs money to solve important economic issues, and it might question SA's potential for future development," Kabát said.

Industry insiders have said that in a relatively small country like Slovakia, the chances for developing air traffic are limited with only link routes to other countries offering any possibility for expansion of traffic.

But that doesn't mean the state should cash in its chips, they add. Air Europe Transport's Kuboši said that the government should do all it can to help airlines in Slovakia to develop as many connections within the region as possible. "Slovaks will never travel to Europe and the USA by air from Bratislava. We should think about working some good connection with regional airports, such as Frankfurt or Zurich."

Mlady's criticism comes at a time when Slovenské aerolínie has begun to turn round huge losses from last year, and owes at least part of its venom to Mlady's belief that the government is to blame for the trials of the past 24 months.

As a result of a Transport Ministry decision to strip the firm of its operating licence for seven months in 1999 over concerns about the firm's ownership structure, SA made a loss of 107.4 million crowns and transported only 9,270 passengers in 1999.

This year, however, the company has transported more than 100,000 passengers and decreased its loss to 13.06 million crowns. "Improvement of our economic performance was due mainly to the fact that we transported more passengers on the routes from Bratislava to Moscow and Košice, and had more charter flights abroad," Mladý said.

After a terrible year like 1999, Mladý said, the year 2000 had been one of stabilisation for the company, and that therefore development programmes such as a new route connecting Bratislava with Zurich could not be launched.

Nor has stabilisation come easily, given the firm's limited resources. Despite the fact that most of SA's passengers are business people, Mladý said, the increasing volume of foreign direct investment into Slovakia this year had had little influence on SA's improved economic performance.