Of Slovakia's four premier mountain ranges, the obscure Malá Fatra is probably the least appreciated. Even its name - malá means 'small' - seems designed to encourage tourists to give it a miss.
This is a pity, for while its mountains are less dramatic than the High Tatras or the Veľká Fatra, with an area of over 22,000 hectares and peaks of over 1,700 metres, the Malá Fatra are hardly small. Indeed, because of their relative obscurity, they tend to be quieter, cheaper, less crowded and serviced by a more homespun tourist industry. In the winter the mountains offer some of Slovakia's best skiing, and in the summer great hiking. Museums and monuments celebrate a past that includes the most important events in the history of the Slovak nation. 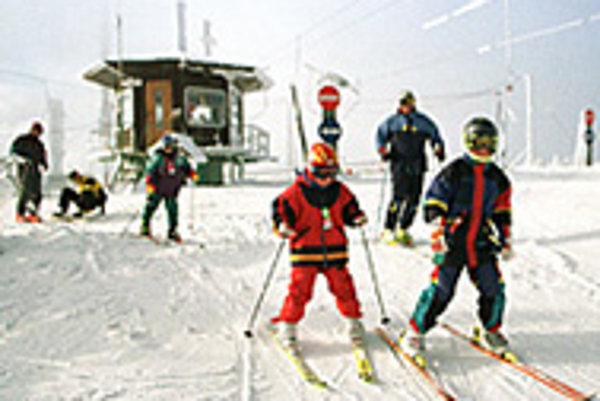 Font size:A-|A+0
Of Slovakia's four premier mountain ranges, the obscure Malá Fatra is probably the least appreciated. Even its name - malá means 'small' - seems designed to encourage tourists to give it a miss.

This is a pity, for while its mountains are less dramatic than the High Tatras or the Veľká Fatra, with an area of over 22,000 hectares and peaks of over 1,700 metres, the Malá Fatra are hardly small. Indeed, because of their relative obscurity, they tend to be quieter, cheaper, less crowded and serviced by a more homespun tourist industry. In the winter the mountains offer some of Slovakia's best skiing, and in the summer great hiking. Museums and monuments celebrate a past that includes the most important events in the history of the Slovak nation.

I started my trip to the Malá Fatra in the quirky and beautiful town of Terchová. The Malá Fatra run diagonally between the north-western Slovak towns of Žilina and Martin, and Terchová, a half hour bus ride from Žilina, sits at their northwest corner.

Terchova was the birthplace of Slovak national hero Jánošík, sometimes called the Slovak Robin Hood, to whom the town pays homage with a statue and museum. In the winter Terchová is teeming with international visitors drawn to the Vrátna Dolina ski centre (one of Slovakia's largest ski centres, capable of dragging 9,050 people up the mountain every hour), which lies five kilometres south of the town.

As tourist-savvy as its 4,000 locals are, Terchová retains the charming peculiarities of a small town. When I got off the bus, the first thing I saw was a man frantically chasing a sheep through his front yard. Another man was cruising the main street in a small station wagon. He had mounted a bullhorn on the top of his car, and was offering for sale a wooden cabinet he had jammed in the back. I crossed the street and leaned over a rail guarding a small brook that was littered prodigiously with apples, as if upstream there had been a catastrophic fruit picking accident.

An old woman walking by couldn't explain the fruit, but after I asked for directions to a hotel, she explained in great detail why she couldn't offer me a room herself (her daughter had recently had a baby), and apologised profusely. For a conversation between strangers in Slovakia, it was unusually open and friendly. I got the impression that she had put up tourists for many years and missed chatting with foreigners.

Many people in Terchová offer rooms to strangers, and many others work in the town's penzions and hotels, which are literally around every corner. Although it's a good idea to make reservations during ski season (January to May), spur-of-the-moment travellers can usually find a bed somewhere. To bargain with the locals, look for the signs that say 'Privat'.

Buses to Terchová stop in front of the town church, and from there different buses (marked Vrátna) run regularly to the ski centres. By foot or by car, take the first or second right after the church and follow the tallest visible peak in the distance.

This road leading out of town and into the mountains is known for its beautiful and jagged rock formations. One of them supposedly looks like a kneeling monk, but I couldn't find it. To me the rocks were psychological ink blot tests. Tired from walking all day, I kept seeing bath tubs and plates of halušky.

Restaurants, hotels and penzions can also be found on the road, and along two dead-end turn-offs, one right, one left, that come out before the largest ski centre, which is on the left. The road comes to a stop three kilometres beyond the centre at a hotel with a smaller ski lift. In all there are four skiing areas known for long and spacious runs within three or four kilometres. A tourist's best bet is to buy a pass that covers all of them and wander where he or she pleases.

Coming back into town, I was persuaded by the staff at a local hotel, who seemed keyed up for the droves of guests that hadn't yet arrived, to allow them to put me into a room with a large bath tub and to arrange a massage from the local masseuse. The next morning I felt fit for anything, although all I had lined up was a visit to a town at the south-eastern edge of the Mála Fatra - Martin.

Martin is a typical mid-sized Slovak town. It's grey and cheerless, full of paneláky and industry that appears to be on its last legs. But it is surrounded by beautiful mountains, which are habitually covered by low, thick clouds. When the clouds back off some, they give the unique impression that the mountains are smouldering after a long burn.

The town also has enough history to occupy a tourist for weeks. For starters, the Slovak language was first codified in 1848 based on the Martin dialect. Locals love to tell you they speak the purest Slovak in the country.

Martin was also the centre of the Slovak national movement that officially began in 1861 with the signing of a declaration demanding rights from the Hungarian authorities, an event commemorated by a relief on the Square of the Declaration of the Slovak Nation near the town's pedestrian zone in the centre. To find this and other local monuments, stop by the Stahlreisen travel agency near the Jánošík statue on the main square and ask for a brochure (available in English) with a town map.

A five minute walk from the centre leads to the Slovak National Literary Museum, which exhibits the first writings of Slavs in what is now Slovakia, dating back to 800 AD, and short biographies of the most influential writers in Slovak history. The museum was built in 1864 as the first building of Matica Slovenská, which for years functioned as the guardian of Slovak culture, scholarship and printing during Hungarian rule. Today, Matica is the parent organisation of the museum and an enormous national library several blocks away.

Museums, most of which cost just ten crowns to enter, are everywhere in Martin, and I had most of them (and their talkative curators) all to myself. A branch of the Slovak National Museum, a great monolith, sits on the edge of town and includes a colourful display of traditional Slovak dress and a photographic exhibit of famous Slovak Milan Rastislav Štefánik, an army general and one of the founders of the first Czechoslovak state in 1918.

A footpath out front leads to the Slovak national cemetery, where many of the most important figures in Slovak history are buried. Skanzen, or an open air museum with nearly 100 authentic wooden structures, is a short drive or bus ride to the southeastern part of town. (From October to May the museum is open by appointment only. Tel. 0842/4133096).

But I felt a sad contrast between the town's history and the present. Martin has never recovered economically since a major factory that produced tanks closed shortly after the Velvet Revolution (The locals also love to curse Václav Havel, the Czech president who made that decision.) As I walked its empty streets from museum to museum, it seemed to me that more happened in Martin's history books than in its present-day community.

Of course, the ski season hadn't yet started. During the winter, even more than the museums, Martin's biggest attractions are the two large ski centres. To the north-east is Martinské Hole, the larger and better-known of the two. It can take some time and effort to get to, and if you don't have a car, take bus number 41 from the centre of town to a chair lift 10 minutes away. The chair lift, which also has parking facilities nearby, is a 20 minute ride to the ski centre. The centre is also directly accessible by a narrow mountain road that leads out of the nearby town of Vrútky.

On the southeastern side of Martin, Jasenská Dolina ski centre offers smaller, gentler slopes, cheaper prices, and is a five minute car ride from town. Follow the main road south towards Turčianské Teplice and follow the signs.

Since ski season hadn't started, I had to find other diversions. Slovak Bethlehem, for instance, is an impressive attraction which most tourists miss. It is a large (4-5 metres long by 2 metres tall) wood carving with a manger scene surrounded by miniature versions of the most significant cultural sights in Slovakia. The mechanised carving shows Slovak figurines engaged in tasks such as cutting wood and making wine. Slovak Bethlehem is in a small marked building 20 minutes south of Žilina on the main road in the small town of Rajecká Lesná.

The village of Čičmany, a living architecture museum, lies a little farther southeast. Hundreds of years ago, locals famous for their dressmaking began applying embroidery designs to their large wooden homes. Today Čičmany has over 300 such houses, which look like gingerbread houses. Several have been turned into penzions. The village also has a small ski lift.

In the opposite direction from Martin, 10 kilometres past the larger town of Ružomberok, lies the village of Bešeňová with renovated outdoor thermal spas that have become the most popular in Slovakia. After a few hours I had to be dragged away; I could have spent days alternately prancing around in the cold and soaking in the hottest of the pools.

Later that night, my last in Martin, I ended up in a pub eating halušky and talking politics with locals who were determined to intoxicate me. Outside, the night air was crisp, and with the museums closed, the centre lined with old-fashioned street lamps and the moon hanging over the mountains, the town was at last making a romantic impression.