Hundreds of years ago when serfdom was abolished and land was passed to locals by the Hungarian royalty, Štrbské Pleso (Cleft Lake) and its surrounding forests were given to local Slovak peasants. They did not appreciate the gift.
The Štrba locals were incensed at being given what they said was worthless land. Calling the lake itself a "useless pond", they threatened to drain it and use the reclaimed meadow for pastures to salvage some value from the land. 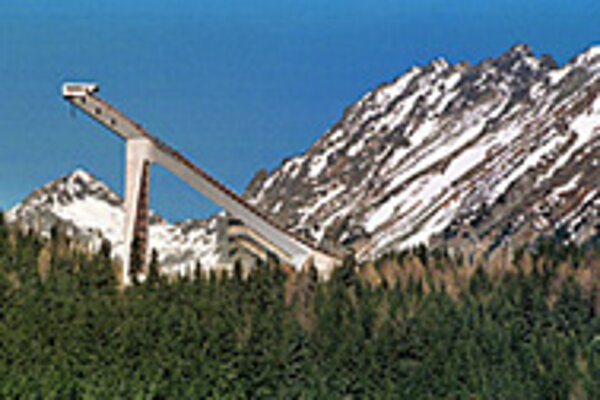 Font size:A-|A+0
Hundreds of years ago when serfdom was abolished and land was passed to locals by the Hungarian royalty, Štrbské Pleso (Cleft Lake) and its surrounding forests were given to local Slovak peasants. They did not appreciate the gift.

The Štrba locals were incensed at being given what they said was worthless land. Calling the lake itself a "useless pond", they threatened to drain it and use the reclaimed meadow for pastures to salvage some value from the land.

But the forests were not worthless at all, writes Ján Lacika, author of Tatras, a book published in 1999 on the mountain range of the same name. It's just that the 13th century peasants did not realise the potential for tourism back then.

"The local lord, Jozef Szentiványi, [in the late 19th century] quickly found out that the land so blindly rejected by the peasants was not in the least bit useless," Lacika writes. "[The peasants] knew nothing about its potential as a tourist resort, the lake represented for them a mere 'useless lake'."

Szentiványi harboured grand visions of creating a haven for the 'Tatra wanderers', mountain travellers who had begun exploring the mountain range in the 17th century. In 1872, he built a log hut on the lake's eastern shore which served as a hunting lodge. The following summer, he transformed the hovel into a board and lodging compound, Štrbské Pleso's first hotel.

Development has since continued at an alarming rate. In the 128 years since the erection of the first tourist accommodations on the lake, the Hungarian's vision has taken shape in several huge hotels, a few blocks of flats, restaurants and a large paved car park around the lake and in the forests nearby.

Štrbské Pleso, which at 1,355 metres above sea level is the highest town in the High Tatras range, was by the mid-1960s developed to the point that it was awarded the 1970 world championships in cross-country skiing.

Two massive ski jumps were built for the international winter sporting event, the largest of which juts above the tree-line, visible for miles around in all directions. Some 60,000 onlookers can view the jumping competitions in the metal spectator stands built on the steep slope and at the bottom.

The spectator stands are odd looking - ugly many would say - with the criss-crossing, angular structure left today rusting and derelict, giving the impression that they could at any moment fall from their precarious perch on the steep mountain cliff.

Despite these curious remnants, the 1970 competition, writes Lacika, paved the way for yet more development and dreams of eventually hosting the Olympics - ambitions that Lacika says are as fierce today as they ever were. "The people living below the Tatra mountains long to experience the same explosion of joy brought here by the decision to organise the 1970 [winter] World Championships.

"After the great success of the championship and the abundant experience gained, the ambitions of the Tatra people grew to Olympic dimensions. The local people have not given up the idea that one day the Olympic flame will burn below the Tatra peaks, and over Štrbské Pleso the five-ring Olympic banner will flutter."

But many Slovaks believe the locals should give up their Olympic dream. Environmentalists, for one, are appalled by the development, noting that the town lies within the borders of Tatra National Park (TANAP).

"[In Štrbské Pleso] they have giraffe slides and big speakers with loud music," complained the Environment Ministry's Peter Straka to The Slovak Spectator in November. "This is a national park? If you want that stuff, put it in [the nearby towns of] Liptovský Mikuláš or Poprad, but don't put it in the heart of the mountains. In national parks a priority must be placed on nature conservation."

It appears, though, that little if any emphasis has been placed on conservation in the resort town. Although the lake at one point was surrounded by thick forests, "the main part of the forest was cut down for construction of tourist facilities," reports the Slovakia and the Slovaks Beliana encyclopaedia.

Several massive hotel resorts have been built, including the triangular Patria Hotel on the eastern shore and the distinct Panoráma Hotel, which may be the ugliest example of communist-era architecture in the whole country; it appears to have been designed by an architect striving to alienate guests with inhuman and unnatural contours - an obnoxious site in the midst of such natural beauty.

Thankfully, the eyesore that is the tourist trap of Štrbské Pleso is contained in a relatively small area. Beyond lies what visitors to TANAP come for: the mountains, the miles of trails, and the unmolested forests.

During the winter months, hiking on certain trails is restricted in order to protect the local animals and plant life. Even this winter, which has been unseasonably warm and snow-free leaving trails to the peaks of Rysy (2,499 metres above sea level), Kriváň (2,494 metres) and Kôprovský štít (2,367 metres) passable, the entrances to the paths are closed.

After badgering an employee of the Štrbské Pleso information centre on a recent cloudless and unseasonably warm day, insisting that Kriváň could be conquered if only given the chance, I was told firmly that it would be "not wise" to attempt the climb. "If you get in trouble and need to be rescued, you have to pay the bill," she added in exasperation.

Of course, she was right. Weather conditions in the Tatras can, and often do, change from minute to minute: standing 50 feet from the lake with a clear view of the peaks looming above, a tourist's view can be changed in 60 seconds by a rolling fog bank obscuring even the nearby lake.

Safer hikes are still possible in the winter months. To the west, the trail to Jamské pleso, a small mountain lake, can be reached within an hour on a trail winding slightly uphill through the forest.

North of the Štrbské Pleso lake, a trail begins just above the two ski jumps leading up to Chata pod Soliskom. The hike is a steep climb, but easily navigated in about an hour. The peak of Predné Solisko (2,093 metres) can also be climbed a further hour above the chata, but only on warm and snowless days.

Perhaps the best winter hike is to Popradské pleso to the east. In the summertime, the hike takes about an hour, but in the winter, struggling through snow that can be thigh-high even though the trail is regularly ploughed, the trip can last twice as long.

Popradské pleso (1,494 metres) lies at the bottom of Mengusovská dolina and is surrounded on three sides by jutting mountain ridges soaring a thousand metres above. Just south of the lake is the Symbolický cintorín ('symbolic cemetery') with several wooden crosses honouring those who have died in the mountains.

On the lake's north shore is Chata Popradské Pleso, which remains open all year even though car access is not allowed. The first chata was built on the lake in 1879 but burned down a year later; local legend has it that a mountain herb collector set the blaze, feeling that tourists were intruders who threatened his way of life.

Today's chata has several rooms, a restaurant and a pub serving Slovak staples such as bryndzové halušky, and Tatran beer on tap.

Skiers can also get their fix at the lone ski resort in town, fittingly named Štrbské Pleso. The resort has two chair-lifts, four pull-lifts, a cross country skiing course and an altitude differential of 440 metres, with a high point of 1,840 metres.

As the The Slovak Spectator went to print December 14, the Tatras had yet to receive a significant snowfall, with only the highest peaks wearing a dusting. The lack of snow has hurt winter tourism, hotel officials said, and has also threatened the Winter Alpine Skiing World Cup planned for the mountains between December 20 and 21. Organisers said they had not even been able to make artificial snow as temperatures stubbornly remained above freezing.

But the locals aren't worried. When asked about the lack of snow, a Panoráma Hotel employee shrugged her shoulders, saying, "yeah, it's hurt business so far. The slopes are supposed to open December 15. But look at last year. We had no snow into January, and it turned out to be the snowiest winter in 50 years."

Getting there: Take the Bratislava-Košice line to Štrba, about a five hour trip. At the Štrba station, catch the zubačka - a special train designed for the steep mountain slopes - to Štrbské Pleso. A one way ticket from Bratislav costs less than 300 Slovak crowns, 466 crowns for first class. For exact train departure times, log onto www.zsr.sk.

Where to stay: The town is full of large hotels which are relatively expensive by Slovak standards. Try the Hviezdoslav Liečebný Dom on the southern edge of the lake. The building is older than the other modernish structures, and has a more homey atmosphere. A single room with a bath costs 28 Deutsche marks, but if the receptionist can be convinced that you live in Slovakia she'll give you the Slovak rate of 310 crowns per night. Tel: (969) 449 2351-3.

Where to eat: Restaurants in town serve large portions and provide service in English and German, but are also expensive. Try the Slovenská Kolibka, a small restaurant with friendly service and a welcoming environment next to Hviezdoslav. The prices are surprisingly low - beer costs 13 crowns, a large dish of Halušky 49 crowns, and a whole chicken, the most expensive item on the menu, goes for a reasonable 135 crowns.