Bratislava soup kitchen an island of stability for homeless

In a Bratislava post office on a December afternoon, a bent old man in a long woollen coat scribbles on a piece of paper. His fingers are numb from the cold and marked with toil: he carries two heavy bags containing all his belongings everywhere he goes. The tiny pencil keeps slipping out of his grasp.
The old man - a 62 year-old former businessman with a master's degree in mechanical engineering - spends his nights in the capital trying to find a warm place to get a little sleep. If unsuccessful, he stays awake, walking about all night to keep from freezing to death. Comfort, shelter and sleep are never guaranteed, and are often not found for days on end. 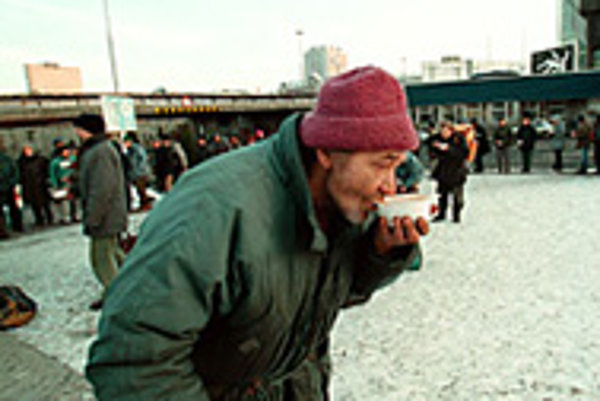 Font size:A-|A+  Comments disabled
In a Bratislava post office on a December afternoon, a bent old man in a long woollen coat scribbles on a piece of paper. His fingers are numb from the cold and marked with toil: he carries two heavy bags containing all his belongings everywhere he goes. The tiny pencil keeps slipping out of his grasp.

The old man - a 62 year-old former businessman with a master's degree in mechanical engineering - spends his nights in the capital trying to find a warm place to get a little sleep. If unsuccessful, he stays awake, walking about all night to keep from freezing to death. Comfort, shelter and sleep are never guaranteed, and are often not found for days on end.

One of the only constants in František Baran's life as a homeless person comes every weekday at 15:00 when he stands in line with others like him and waits for a bowl of hot soup, a slice of bread and a cup of tea in front of Bratislava's main train station.

Baran, who used to work as an inventor, says treachery by his colleagues, who stole his inventions and sold them as their own, forced him into the vagabond life, drifting from one place to another in search of a better future and a respite from his bitter memories.

At least, he says, someone still cares enough to feed him. "I would be completely lost without their help," he admits. "When I don't even have food to eat, they are the only ones who take pity on me."

'They' are the Bratislava Catholic Charity (BCC), along with other Bratislava non-government organisations and religious services providing care and aid to the homeless. The BCC's main aim is to provide the essentials for a part of the population most citizens tend to ignore. The charity helps them find jobs and get ID cards, and offers immediate services and goods such as showers, second-hand clothes, medical care and food.

The warm meal served outside the station will be the only meal of the day for some. In cooperation with the Maltézska pomoc (Maltese Aid) NGO and the Bratislava Old Town City Council, the soup kitchen serves 25 litres of soup to nearly 100 people a day, at least 25 of whom are regulars.

Although the charity has around 20 workers, mostly volunteers or young men doing their military service, the main responsibility falls on the shoulders of two full-time sociologists. The work is a labour of love, they say, one which is often unbearable due to the daunting task of helping so many needy people with so few resources.

"We are in direct contact with the homeless every day, and there is just too much work to do," said Rastislav Molnár. "Sometimes what we have to do is beyond our strength. But we continue because we feel sorry for these people."

Their task is made more difficult, he says, because Slovakia has no national programme aimed at helping the homeless. The Social Affairs Ministry, instead of handling the problem itself, has passed it on to the municipalities, making every town and city obliged to provide shelter and food. Often, NGOs or charities are left to do the job alone.

"We have two priorities," said BCC worker Viera Pribilová. "One is to provide accommodation and the second is to help the homeless find job opportunities. But we have problems. We have been unsuccessfully negotiating with city authorities for them to fix an abandoned house or to reserve several beds in hostels."

The lack of a permanent shelter complicates their efforts to find employment for the homeless. "We lack the money to pay for accommodation for those we find employment for," she said. "The employer often then fires them because they [the homeless] are dirty, always tired, and so on. We need to provide accommodation for them for at least a couple of months after they get jobs."

The homeless problem is especially acute in the nation's capital because the homeless feel that more money and assistance can be found in Bratislava. "They come here [from all over the country] because there is a better chance to beg successfully and also to remain anonymous," said Magda Krugová, the head of the Bratislava Old Town Social Department.

"Even though we try to help all of them, we cannot do much for them if they are Old Town outsiders, if their permanent address is somewhere else," she said. "But still they want to stay here. Even when we assure them that they can get help in their home towns, many of them still don't want to leave."

Krugová estimated that there are around 500 to 800 homeless people in Bratislava who can be divided into three groups. The first group includes those who are satisfied with their current state, or for some other reason - usually addiction - have no ambition to seek employment. The second group consists of mentally retarded and mentally ill people, whose care needs are enormous, while the third group are those seeking jobs and who want to escape their transient lifestyles as quickly as possible.

When a person seeks help from the BCC, they are asked to fill out a form asking for personal information and reasons why they are homeless. But since the charity has no legal right to investigate their identities or their past, social workers have to decide for themselves whether or not to believe the stories they hear.

"In the cases when they are actually victims, they were usually cheated by people either at work or in their home," said the BCC's Pribilová. "But a majority of the homeless are drug or alcohol addicts."

"Most of these people worked outside their home towns for 20 to 30 years, and thus lived in various hostels, which have since been closed," Krugová said. "Their contacts with their families were already broken, and after they lose their jobs the families don't want them back."

"Others, such as the mentally ill, may have been cheated out of their homes when state flats were being transferred into personal ownership," she continued. "The new owners may have gotten them to sign whatever documents they needed in order to get them out of the flats."

But for Pribilová, how the homeless ended up in their situation is irrelevant. "For me, they are people who are suffering. This way of life is undignified for a human being. It touches my heart and saddens me when I see to what depths a man can fall."