Despite the pleasure expressed by cabinet officials over the ease with which the 2001 budget was approved in parliament last week, analysts have ascribed the apparent unanimity of coalition MPs to the fact that key but politically sensitive reforms to the health care, education and agriculture sectors were not included in the financial package. If the reforms had been planned for 2001, analysts have said, they would have dramatically decreased a deficit that is already perilously close to the upper limit of 4% of GDP which international organisations such as the International Monetary Fund (IMF) and the government itself have recommended as a maximum safe shortfall. 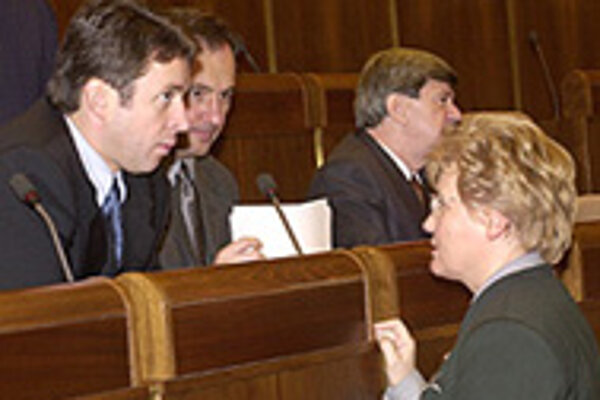 Font size:A-|A+  Comments disabled
Despite the pleasure expressed by cabinet officials over the ease with which the 2001 budget was approved in parliament last week, analysts have ascribed the apparent unanimity of coalition MPs to the fact that key but politically sensitive reforms to the health care, education and agriculture sectors were not included in the financial package.

If the reforms had been planned for 2001, analysts have said, they would have dramatically decreased a deficit that is already perilously close to the upper limit of 4% of GDP which international organisations such as the International Monetary Fund (IMF) and the government itself have recommended as a maximum safe shortfall.

In December 1999, government officials and analysts had discussed the need to limit state expenditures through reforms such as cutting civil service ranks and introducing tuition and user fees for state services. Conspicuously though, no such reforms have started this year, and analysts are concerned that with elections just over 18 months away, the govenrment may leave it too late to move on

"If something doesn't happen and reforms don't begin next year, then they won't begin in this government's term in office," said Tomáš Kmeť, analyst with Slovakia's biggest bank, Slovenská sporiteľňa (SLSP).

He added that with elections scheduled for 2002, politicans' nerves over the introduction of politically unpopular reforms were unlikely to hold beyond 2001.

"It speaks volumes for the chances of these reforms that the highest number of MPs in the history of Slovakia voted for the 2001 budget - a budget that didn't include the reforms. If they [reforms] had been in the budget, it wouldn't have gained such massive support in parliament," Kmeť said.

The government, for its part, still admits the need to begin reforms. Finance Ministry spokesman Peter Švec told The Slovak Spectator December 19 that the problem with launching the reforms lay in a lack of consensus within the government coalition.

"We [the Finance Ministry] have been urging different ministries to find a consensus on health care, education and agriculture reforms, but haven't been successful yet. It is in our [Finance Ministry's] interest to begin these reforms, and we realise their importance, but the ministries themselves have to agree. We will definitely keep reminding the government of them through the course of 2001," Švec said.

Both the IMF and World Bank have said that Slovakia must meet its economic targets, such as the budget deficit as a percentage of GDP, to strenghten fiscal stability in the medium term and demonstrate the government's commitment to sticking to economic reform programmes and through this attracting important FDI.

Roger Grawe, head of the World Bank's Central and Eastern European office in Budapest, said that the 2001 budget provided a basis for reform in the financial and corporate sectors, but added that the government must implement other reforms soon, especially in health care, education and agriculture.

"The year 2001 would be suitable for running efficient reforms and strenghtening Slovakia's fiscal balance," Grawe said. "It's precisely in the good years [as Slovakia has now] that governments undertake measures allowing them to put in place more difficult restructuring steps, which will strenghten and sustain fiscal stability in the medium-term. Next year offers that kind of opportunity for Slovakia, and therefore steps should be taken to reach these medium-term objetives," Grawe said.

Another major drawback in the budget, experts said, was that the deficit - Slovakia's highest ever - was underestimated, throwing up potential dangers for interest rate developments and through that the country's trade balance.

According to Ján Tóth, analyst with ING Barings, the government might not be able to keep the deficit under 4% of GDP. Tóth explained that the biggest potential risk for the budget deficit was a 'hidden' 9 billion crown government investment in highway construction and other development programmes.

"This wasn't included in budgetary expenditures. It's unlikely that the deficit will be under 4% of GDP," Tóth said.

He added that even though many analysts believe the government has underestimated revenues on low calculations from value added tax (VAT) and consumption tax it would still fall short of bringing in the deficit at 4% of GDP.

Švec argued, however, that the government was convinced that it could secure extra-budgetary finances from the taxes [estimated at between 5 and 10 billion crowns] to head off any potential problems with the deficit.

"Additional investments into development programmes and highway construction will be covered from these extra finances and we'll stick to our set targets," he said.

While the government will be keen to impress the IMF, World Bank and the international investment community that it can meet its targets, it will also be hoping to keep the gap to a reasonable level, even if it does overshoot the 4% mark, to avoid inflicting further economic woes.

As SLSP's Kmeť explained: "If the deficit goes over 4% of GDP, then the government will be forced to borrow money from the banks to cover it, meaning they can't provide the corporate sector with as many loans at current interest rates. Consequently, production drops and the country will have to increase its imports, negatively influencing the trade balance."

He added: "Another risk that we see is that [the state gas utility] Slovenský plynárenský priemysel (SPP) might fail to pay the full amount of its special contribution to the budget of five billion crowns. Adding all this up [SPP's potential failure to pay its contribution plus the nine billion crowns spent on highways minus the extra 5-10 billion crowns in additional tax revenues], our estimate for the deficit stands at 4.6% of GDP," Kmeť said.