She's a single woman who is "not against marriage, but so far I haven't had the time." She loves detective stories, and singles out Gabriel Garcia Marquez's Love in the Time of Cholera and J.D. Salinger's Catcher in the Rye as her favorite reading material. She dislikes envy and narrow-mindedness, and respects generosity, decency, and straight-forwardness. In the words of MP František Mikloško, she's "the woman who conquered the World Bank". 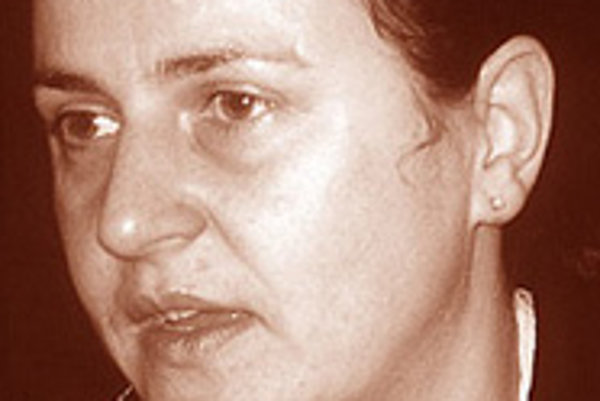 Katarína Mathernová takes off her black leather jacket in a posh Bratislava café as she listens to an exchange between a waiter and a guest. Offered several varieties of Czech beer, the guest asks if the café doesn't carry any Slovak brands. "That's a good question," she nods approvingly, as the waiter arrives to take her order.

It's a small but typical show of patriotism for a woman who in 1999 left a London law practice she loved to come home to Bratislava. What drew her back to Slovakia was an offer from Deputy Prime Minister for Economy Ivan Mikloš to become his senior advisor, a 'right hand woman' who would help draft and implement new laws, as well as cajole and convince bureaucrats of the need for reform.

In her last year on the job, the Michigan Law School graduate and former World Bank employee has stamped her initials on everything from banking sector reform to a vital Bankruptcy Law and OECD accession - successes which are all the brighter in comparison with the country's often murky and clientist political scene.

"I never thought I would come back," she flatly admits, remembering the almost 11 years she spent from 1987 to 1998 in America. "I'm a ruthless cosmopolitan. I like living in the United States, I feel at home there. I found myself there."

But after 1998 national elections put a westward-looking coalition government in power, Mathernová was one of a small group of young, educated, talented Slovaks who chose to help the country take advantage of what she saw as a 'window of opportunity' for economic and social reform.

"[During the 1990's] I followed what was happening here with great interest, but my life was in the States," Mathernová says. "I resented the previous government with a vengeance and a passion. I worked with a number of NGOs and the US government, organising help for the 1998 election campaign. I was hoping for a good result, but I never thought it would mean I went back."

But that all changed when she got an offer from Mikloš to join his team. "I spoke with Mikloš after he accepted the job [of Deputy PM], and I called him to congratulate him. It suprised me, because we had spoken after the elections and he had told me he was moving to Prague. But I felt then that it was time to come back to work together - it was really something that one cannot refuse. The feeling that I could do something here was overwhelming."

Mathernová, 36, is now part of a five-member office which includes advisors such as Vladimír Tvaroška (29), a former star business reporter for the Pravda daily paper, Karol Cimmer (29, formerly of TV Markíza), Peter Malík (29, loan analysis at HypoVereinsbank) and Mikloš himself, who is a youthful-looking 40. Many used to earn far more in the private sector than they do now, while Mikloš turned down a job as head of the influential East-West Institute to join the government in 1998. The financial sacrifice each has made, says Tvaroška, gives the office a strong sense of common mission.

"We're all in the same boat [having taken salary cuts]," he said. "But having a chance to influence economic development here is very exciting, and in the end it's a good [career] investment in the future."

Foreign economists call Mikloš' office a vital source of information about what is happening in the economy, and say the Deputy PM's people are the 'go to' figures whenever groups like the World Bank and the International Monetary Fund (IMF) seek to shape or encourage government policy. Mathernová, they say, has been a key player even on such a highly-regarded team.

"She has been a crucial figure in reform, and critical in liaising between the World Bank, the IMF and the government," said Matthew Vogel, a senior economist for Merrill Lynch in London who worked with Mathernová at the World Bank from 1993 to 1996. "She has formulated and implemented strategy, she got World Bank help for restructuring, and she's put out a lot of fires.

"She's one of many young people who saw things were changing in Slovakia and wanted to be a part of it. They have all given up a lot, and that's very encounraging. You clearly wouldn't have seen these people coming back if Mr. Mečiar were still around."

It's a measure of the significance that young Slovaks attached to the Dzurinda government's 1998 victory that Mathernová chose this moment over all others to interrupt her foreign career.

Having grown up in an "intellectual family" (father a law professor, mother a medical doctor), Mathernová took advantage of relaxed travel restrictions in 1987 to visit the US and apply to American law schools. Accepted by Michigan, she was encouraged by her boss at the Slovak Academy of Sciences to make the best of the chance. Thus it was that she found herself in New York during the 1989 Velvet Revolution, shedding tears over reports of events in Bratislava.

"I was glued to CNN. I remember commuting to mid-town Manhattan and reading the New York Times on the subway, and I started crying when I saw the news on the front page. My brother was chairman of the strike committee at his medical school, and had very little time to talk to his little sister over the phone, but when I could steal a minute from him he would tell me all these exciting things."

Tears aside, she stayed on at her Washington law firm, even during the 1993 split of Czechoslovakia, which she remembers as "the saddest day in my life so far."

"I was extremely sad about the separation of Czechoslovakia, as was our entire family. Now I take it as a reality, in the same way you get accustomed to the death of somebody in the family. I still think that if Czechs and Slovaks had been capable of meeting the challenge entailed by Czechoslovakia, both sides would have been better off than they are now in their integration ambitions, economically, in their minority policies - in every respect. Having said that I accept Slovakia as a reality, and I am a loyal Slovak patriot, as I would have been of Czechoslovakia."

So what was so different about 1998 that it enticed her back to her home town? "I suddenly recognized there may be a finite window of opportunity," she explained. "The government we have now is very possibly the most reformist government we'll have for a long time.

"I strongly believe we're in a race against time, and that we should push reform in those areas where it will lead to irreversible changes, such as cleaning up the banking sector. They [Slovak state banks] had a 105 billion crown black hole [of bad debts] which came from lending money to firms - through corruption and for political reasons - when they knew ahead of time that they weren't going to see the money again. Erste bank [the Austrian financial house which won a tender for the largest Slovak state bank, Slovenská sporiteľňa, on December 12] isn't going to do that. This in some ways makes the economic corruption of the Mečiar era unrepeatable. It's all about reducing the scope for corruption to occur, not lofty prosetylising about how corruption is immoral."

But in many ways, Mathernová has found this sense of urgency difficult to convey to a Slovak bureaucracy and legal establishment used to doing things in their own way and at their own pace.

"Having finished law school in the US as well as Slovakia makes me a charlatan in the eyes of the local legal milieu," she explains. "The legal culture here is a very formalistic and traditional one which favours very narrow interpretations, similar to Germany to 150 years ago. The notion that the law is written down, formalised [public] policy is heresy for Slovak lawyers. I've also been surprised at how little Slovaks communicate with each other. The notion of CC-ing an email to other members of a working committee, for example, is absolutely counter-cultural. I don't know why."

The legal and bureaucratic obstacles, however, have been no match for Mathernová's fiery personality. She gets things done, she says, through "occasional fits of hysteria and getting on people's nerves tremendously. I don't take no for an answer."

She confesses that the ministry officials she works with sometimes suspect a hidden motive behind all the legislative vim and vigour. "Over the last 18 months I've dedicated 95% of my waking time and energy to working and communicating and forcing people to do things and cajoling and convincing and briefing... It sometimes confuses people in other ministries or the private sector, who look at us [members of Mikloš' office] and say 'OK, what's your agenda?' When we reply that 'Well, we just want this to work out', or 'we just want this to be a better law', it's confusing for them. There are always these insinuations, against Mikloš and so on - it doesn't really fit [people's view of Slovakia] that this guy [Mikloš] would just want a better place for his kids to grow up."

Not that Mikloš' office is a 'brain trust', as some observers have called it. "That sounds more elegant, but it's often more like what a farmer has to do when his oxen won't move," Mathernová chuckles.

And so it has gone, a mixture of coaxing and scripting Slovakia's macro-economic recovery, a process which she considers only half-done, what with amendments to the Commercial Code and rules governing collateral for loans in the pipeline, not to mention education, public administration, constitutional, health sector and pension reform. She has no ideas of slowing down, although when she looks back she is struck by how much has been accomplished.

"Last week, when SLSP [state bank] was sold, [Finance Ministry special advisor on banking Juraj] Renčko and I were in Brussels," she recalls. "We looked at each other, and said, 'can you believe it?' In April 1999, when we were setting up the schedule for bank restructuring and privatisation, the notion that something would get done on time, or even three weeks ahead of schedule, was chimeric."

As she puts on her jacket again and prepares to leave the café, she pauses to collect a last thought. Once again, it's a defence of the country, and of how much has been achieved since 1998.

"It amazes me when people say that nothing's been done - whenever I sit down and add it up I see exactly the opposite," she says. "You have to remember that the pace of reform is much more a question of bureaucratic capacity than political will. Take public administration - it's a fundamental reform, and it's about the face of this country for years to come. In other countries, completely changing the face of your country and how it is administratively organised and decentralised takes years."

A mobile call interrupts her, and she stands up briskly.

"This country still has a great chance which it hasn't squandered," she says wrapping a scarf around her neck, "even though if you open up the pages of Slovak newspapers you sometimes get that feeling."