In the midst of the Christmas shopping rush on a recent afternoon at a well-known department store in Bratislava, a swarm of young couples circled a display of artificial Christmas trees.
"We won't have to clean up after it," commented a young woman bent over a tree with glowing fibres. "And this way we won't have to buy a new one every year."
Outside, a man selling natural Christmas trees stood alone in the cold, blowing on his hands and waiting for customers. 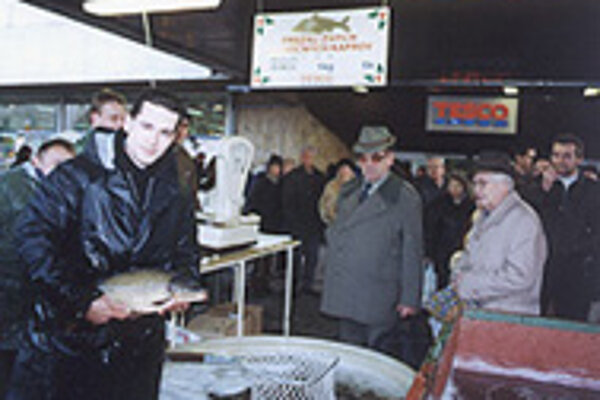 In the midst of the Christmas shopping rush on a recent afternoon at a well-known department store in Bratislava, a swarm of young couples circled a display of artificial Christmas trees.

"We won't have to clean up after it," commented a young woman bent over a tree with glowing fibres. "And this way we won't have to buy a new one every year."

Outside, a man selling natural Christmas trees stood alone in the cold, blowing on his hands and waiting for customers.

"Christmas time should be simple, it should be about calm and introspection," said 63 year-old Bratislava resident Jozef Borák of the buying rush that has swept through the capital this holiday season. "I come to this store because it's cheap, but the way people run around here in a frenzy is not normal. Everyone wants to spend 10 hours shopping."

Purists might interpret the scene at the department store as further proof that the distinct Slovak 'version' of Christmas is being neglected in favour of ceremonies and accessories promoted by Western consumer culture.

But experts say it's not that simple. The influx of Western culture in recent years has only been the most recent factor in a process of change that started at the end of World War II, a process that has left Slovakia's most important holiday a mishmash of traditions both old and new, rural and urban, foreign and domestic.

"The only thing that is certain about the future is that people will continue to celebrate Christmas, that it will be an important holiday," said Viera Feglová, a social anthropologist at the Slovak Academy of Sciences.

Christmas trees, in fact, are a useful metaphor for how Christmas traditions here have evolved. The tree custom first arrived from Austria and Germany during the 18th century, but didn't infiltrate rural areas until the end of the 19th century. Since 1989, capitalism has added further twists.

"Artificial trees didn't exist in Slovakia until after 1989," said Feglová. "But the custom of Christmas trees in general is not much older. Although they started appearing in Slovakia at the end of the 19th century, it was only after World War II that the custom really caught on."

Seventy-two year-old Agnesa Pilátiková remembers how as a child in the small northern Slovak village Považské Podhradie, Christmas trees meshed with local traditions. "My father would hang a small tree from a ceiling beam, and we would decorate it with little pieces of potato wrapped in paper, corn husks and grain.

"And under the tablecloth at Christmas dinner we placed everything from the harvest - corn, wheat, carrots, everything - so that the following year's harvest would be as good or better," she added.

According to Rok vo zvykoch nášho ľudu ('The Year in the Traditions of our People'), a 1986 study of Slovak ethnography by Emília Horváthová, such rituals were rooted in pagan beliefs tied to the cycle of the sun. The period around December 21, the shortest day of the year, was seen by Slovaks as a time of both evil and renewal, a time with great potential to influence the coming year.

When Christianity came to Slovakia in the ninth century, the church sought to appropriate or suppress local traditions. Although it made Christmas the focal point of the season, with advent defining its parameters, local traditions, to the dismay of the church, survived and often became intertwined with Christian beliefs.

"After Christmas dinner, we would go to the local stream and fill a bucket with water. We all washed our face in the water so that we would be healthy the following year," said Pilátiková.

But Christmas changed drastically in Slovakia during and intense period of industrialisation and urbanisation following World War II. "Many traditions existed because of their connection to the agricultural culture. When people started living in cities, the customs had no function," said Feglová

A new political ideology also played a role in their demise. "The communist regime discouraged national traditions and tried to replace them with new customs," said Pilátiková,. "Village life was completely changed, and Christmas changed with it."

With the diminishing importance of folk traditions came an increased emphasis on exchanging presents, a foreign practice in most parts of the country.

"Gift giving wasn't traditionally part of Christmas in Slovakia. Only small things, such as apples and cookies, were given to children who sang or recited poems. But when the Christmas trees came so did the idea of a figure who brought gifts, and with him the whole notion of giving presents," said Feglová. "But even so, it wasn't until after World War II that the tradition really spread."

"We never had money for gifts before," added Pilátiková. "We were always subsistence farmers. But when people went to work in factories, they started earning money, and the focus of Christmas became what was under the tree. It became more materialistic, less spiritual."

Changes also appeared in the traditional Christmas dinner on December 24. Although the meal remained the holiday's biggest event, what was eaten was different.

"There was wide culinary variation across the country in the past. But today the overwhelming majority of Slovaks eat potato salad and carp," said Feglová. "Mayonnaise didn't exist in this country until after WWII. And carp was only found in cities."

Some folk traditions survived, but most of them, especially those involving superstitions, are now performed out of humorous nostalgia. "In the 80s I found some girls in the student dormitory putting the names of potential suitors inside pieces of halušky [potato pasta], discovering who their husband would be by which piece rose to the top of the pot first. But they no longer believed this; they were only doing it in fun," said Feglová.

While the shift from a traditional folk Christmas to a modern urban holiday began in the 1950s, the period after the Velvet Revolution in 1989 has also brought significant change. Christmas is covered visibly in the media, shops trumpet the holiday season, gifts are becoming more lavish, and, of course, religion is now an open part of Christmas in Slovakia.

"During Communism only ardent believers went to church. Now Slovaks who don't go to church all year go to midnight mass on Christmas," said Feglová.

In almost constant flux for most of this century, Christmas in Slovakia has retained at least one central characteristic. "Christmas here is still celebrated with families. Stores aren't opened on December 25, and people don't visit their friends until December 26," said Feglová. "It will be interesting to see if this changes in the future."