Roma unhappy with plans for census

Slovakia's planned 2001 census is still several months away, but some members of Slovakia's minority community have already questioned whether it will be fair.
In an open letter to Prime Minister Mikuláš Dzurinda on January 2, Roma leaders complained that the decision to not translate the census form into the Roma language constituted 'clear and significant' discrimination, pointing to plans to distribute bilingual Slovak-Hungarian, Slovak-Rusyn, and Slovak-Ukrainian census forms in some districts. 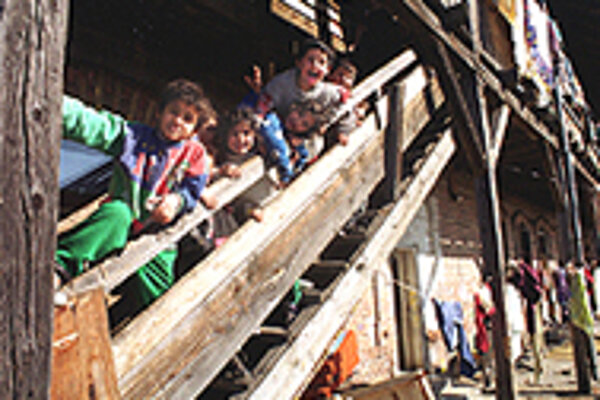 Font size:A-|A+0
Slovakia's planned 2001 census is still several months away, but some members of Slovakia's minority community have already questioned whether it will be fair.

In an open letter to Prime Minister Mikuláš Dzurinda on January 2, Roma leaders complained that the decision to not translate the census form into the Roma language constituted 'clear and significant' discrimination, pointing to plans to distribute bilingual Slovak-Hungarian, Slovak-Rusyn, and Slovak-Ukrainian census forms in some districts.

"The human rights of Slovakia's Roma have been violated," Gejza Adam, leader of the group of Roma leaders who signed the letter, told The Slovak Spectator January 8. "With this action the government has lost the trust of the people."

Government officials, however, have rejected the Roma claims, saying that translating the sheet into the Roma language had been considered, but that the lack of a standard written form of the language had made it unfeasible.

"There are wide discrepancies between local Roma dialects," explained Deputy Minister for Minority and Human Rights Pál Csáky. "The same words sometimes mean different things to Roma from different parts of Slovakia. Using one of those dialects would have actually caused confusion. That was something we couldn't risk."

The 2001 census to be conducted in May will have a major effect on the future division of public finances given to support different minorities in Slovakia. All Slovakia's minorities have said their communities were underreported in the 1991 census, but the problem was most acute for the Roma. Officially, there are around 80,000 Roma living in Slovakia, but experts estimate the actual number is between 350,000 and 450,000.

"The Roma community is almost as big as the Hungarian, but they receive ten times less money from the government," said Michal Vašečka, analyst at the Institute for Public Affairs (IVO) think tank. "This is not due to discrimination, but because of the [1991] census."

In meetings in the first week of the year, however, Roma leaders were still unsatisfied, and they pushed for a solution that would allow Roma NGO's conducting the census among the Roma population, a compromise that was rejected.

"The census is an official government activity, and it is not possible to have a third party administer it in selected places," said Csáky. "I don't know of any country where such a solution would be possible."'

Csáky also questioned the motivation of some Roma organisations. "One of their main goals seemed to be getting money," said Csáky. "We [the government] are committed to supporting the development of Roma culture and nationality financially, but not by funding a census in place of our official one."

But regardless of how the census is administered, Romas will still have to be willing to stand up and be counted. The Statistics Office acknowledged the gap between reported and actual numbers for the 1991 census is significant, but say that aside from conducting a fair and accurate count, there is little they can do.

"We can't force people to identify with their nationalities," said Marián Horecký, director of the Statistics Office's department of citizen statistics.

Csáky explained that the problem of the underreporting for minorities as a whole stemmed partially from communism, when expression of minority nationalities was suppressed.

"It was very unclear in 1991. The revolution had just happened and no one knew what the situation would be like in the future. No one was sure if voicing his or her nationality was a good idea."

But while it is widely agreed that government is more open today with respect to minorities in general, the Roma community is often a target for racism.

"There was the practice between 1995 of Labour Offices around the country marking the files of unemployed Roma with an 'R'. Many employers working with the labour office would not look at files marked 'R'," said Vašečka. "Although the census is anonymous, and so there is no danger of being discriminated directly based on it, the fear that that could still happen is very real."

Vašečka added that regardless of fear, many Roma feel so integrated into the Slovak or Hungarian communities that they identify with those ethnicities.

Csáky said a media campaign with the slogan 'Voice Your Identity' is set to begin in March encouraging all minorities to report their nationalities, and that he plans to work with Roma leaders to spread that word through their communities.

He also said that he would like to see Roma on local census committees throughout the country and present during census administration to answer questions.

"The situation of minorities in Slovakia has improved over the last ten years. We now have open discussion in our society of minority issues and a government that has openly declared its will to support a multi-ethnic culture. Now we need an objective picture of the make up of our society," said Csáky.

He added, however, that he did not expect that the count in this year's census would jump by more than 10% in any of the minority communities.