Juraj Renčko: SLSP's sale was a success, VÚB will be same

At the end of the year 2000, the government chose a majority owner for Slovakia's largest financial institution, Slovenská sporiteľňa. The deal, in which Austria's Erste Bank bought an 87% stake for 18 billion crowns ($391 million), finished two weeks ahead of schedule.
The privatisation of two more banks, Investičná a rozvojová banka and Všeobecná úverova banka this year is expected to be important for the micro-economy as the new owners of the finance houses would bring not just new management but new ideas. 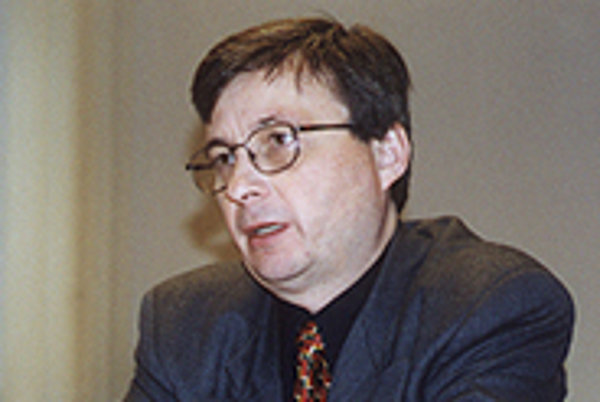 At the end of the year 2000, the government chose a majority owner for Slovakia's largest financial institution, Slovenská sporiteľňa. The deal, in which Austria's Erste Bank bought an 87% stake for 18 billion crowns ($391 million), finished two weeks ahead of schedule.

The privatisation of two more banks, Investičná a rozvojová banka and Všeobecná úverova banka this year is expected to be important for the micro-economy as the new owners of the finance houses would bring not just new management but new ideas.

The Slovak Spectator [TSS]: How difficult was it to privatise Slovenská sporiteľňa (SLSP)?

Juraj Renčko [JR]: Taking into consideration that SLSP's privatisation process was well-organised and we had a good privatisation advisor [J.P. Morgan - ed. note], and started with restructuring the bank first, the process was less difficult than we expected.

We managed to privatise SLSP transparently, and from this point of view, I consider SLSP's privatisation a benchmark for privatisation processes in Slovakia.

The positive signal was that the privatisation process was in line with international standards, and that there were no leaks of information during the process, which wasn't always the case here in Slovakia before.

TSS: In what aspect was Erste Bank's offer the best?

JR: From the point of view of quality of all bidders [Bank Austria and UniCredito also bid for the bank - ed. note] and the strategies they offered for SLSP, Slovakia and the region, there were no considerable differencies among them.

The final difference was in financial conditions. Erste Bank offered the most [18 billion Slovak crowns - $391.3 million - ed. note] but the price offer had to be evaluated from several viewpoints, such as required guarantees from the state's point of view, the possibility to ask the government to buy some receivables from the bank's portfolio etc.

TSS: SLSP will be the only bank where the state will keep some minority stake. Why did it decide to keep this stake and what does it intend to do with it?

JR: SLSP is the biggest financial institution in Slovakia, and its role for the whole Slovak economy is significant, so the government decided to maintain a 10% stake in the bank. We simply want to have information about how the bank is working, how its internal restructuring is being handled and how it contributes to overall economic growth.

There will be a time when the government comes to a conclusion that it doesn't have to keep its stake there anymore. It can either put it on the capital markets then or offer it to SLSP's strategic partner. This is likely to happen in four to five years time.

TSS: What about interest in VÚB's majority stake?

JR: There has been interest expressed from bidders who are regionally more widespread than in SLSP's case. This is only indirect interest as the tender hasn't been launched yet. We have about 10 potential bidders so far.

I expect a decision on when the information memorandum will be signed to be made in the second week of January. The majority investor, which we would like to choose in the first half of the year, will receive a minimum 67% stake in VÚB.

TSS: What kind of investor would suit VÚB most?

JR: The investor should have already been present in this region for a reasonable period of time, should have developed a system of corporate finance to fit to VÚB's profile and should have global operations.

TSS: Analysts have said that interest in VÚB won't be as high as it was in SLSP. How right are they?

JR: When we analysed interest in VÚB and SLSP, there were many interested parties which had no preference for one bank over the other. Taking into consideration that SLSP could get only one bidder, the rest are potential buyers for VÚB.

TSS: IRB's privatisation has fallen behind its original schedule [the bank was due to be sold by the end of last year - ed. note]. What is the sale's current state?

JR: Four to five subjects have expressed a potential interest in the bank, but no one has made an offer yet, so the process continues.

Apart from that the two years of caretaker administration [1997-1999] have reflected on IRB's image, even though it is a normally functioning bank nowadays. These factors have combined to produce lower interest in IRB.

TSS: Analysts have said that in the coming year banks will remain strict in their loan-policies and that the corporate sector will continue to suffer from a lack of credit provision. When do you expect more significant improvements in the banks' loan policies?

JR: There are direct and indirect connections here. The direct one is when and how banks will start to finance companies. Several conditions have to be fulfilled here. A bank has to able to bear the risks connected with its more open loan policy. Secondly it has to have worked out its internal mechanisms, such as risk management, when allocating its assets. Here we expect a significant contribution from the banks' privatisations.

Thirdly, especially regarding SLSP now, Erste Bank's strategy is to become a leading retail bank in the region, and comes to Slovakia with several strategies focused on financing small and medium-sized businesses. This is an important part of Erste's strategy.

Another important thing for businesses is that companies can use movable assets as collateral, which is of tremendous importance, especially for small companies, because it gives them a chance to provide bigger guarantees for loans.

TSS: You have been working on micro-economic legislation over the last two years. How important is this legislation for shaping the Slovak economy?

JR: What we have contributed to is a revision of the bankruptcy law, issues surrounding right of lien and corporate governance.

The current Commercial Code deals with founding a company, but focuses much less on its functioning.

The legislation we have been working on is important because it is a part of financial and corporate sector restructuring. It allows the creation of an economic environment in which there is a standard functioning of economic flows in the country. It enforces financial discipline, strengthens creditors' positions and speeds debt settling.

TSS: How important will 2001 be for implementing revisions to the Bankruptcy Law, especially considering that one of the most important parts of the legislation, that dealing with the period after which bankruptcy becomes formal, will be effective as of February this year?

JR: This 30 day period was discussed a lot and will be important. This year in general will be crucial for the law's implementation. This law will influence bankruptcy processes which started before August 1 2000, when it took effect, but there is a lack of willingness to accept this, so we will see what the results actually are.

The Justice Ministry has received a grant from the World Bank to improve court infrastructure. A team of experts, which would check on effective use of these finances as well as functioning of the law's revision, will be formed. If some problems with application of the revision occur, this team will prepare smaller revisions to the law.

TSS: When is Slovakia going to get the EFSAL [loan for financial and corporate sector restructuring] loan from the World Bank?

JR: EFSAL is more or less prepared. We have 95% discussed the conditions of the loan. The last thing blocking EFSAL's approval is a staff monitoring programme with the IMF which is a condition for EFSAL.

The programme has been prepared. We had an IMF mission here in December. As soon as the decision with the IMF on this programme is made, the discussions on the loan will then be finished in Washington.

TSS: When will the loan be available?

JR: We are still dealing with the end of March as a referential date for the loan. It is possible that due to on-going negotiations with the IMF it might be here a bit later, but this delay won't be significant.

This year will see something similar. I don't see fiscal risks in the 2001 budget.

TSS: If the deficit is more than 4% of GDP, do you think it will have any impact on co-operation between the IMF, World Bank and the Slovak government?

JR: I don't think so. As far as the deficit goes what is important is its structure, whether it is under control, the government's financial discipline and so on.

Certainly, fiscal development in Slovakia has been more tight than in other countries and it is under control, and that control improves year after year.