Peter Andraško shakes his head, smiles and looks up across the pub table.
"This woman on the front should really be completely naked. And the picture should be in colour too."
Sitting in Umelka pub in downtown Bratislava, Peter and two other university friends are reading a free, eight-page bi-weekly newspaper - Times International - from time to time raising their heads and breaking into deep guffaws or taking up one of the subjects broached in the paper as a point of discussion. 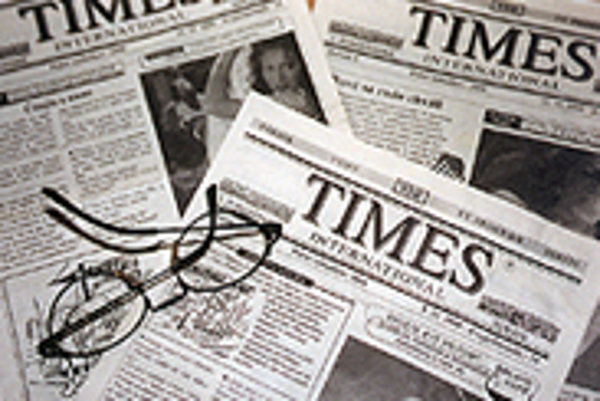 Font size:A-|A+0
Peter Andraško shakes his head, smiles and looks up across the pub table.

"This woman on the front should really be completely naked. And the picture should be in colour too."

Sitting in Umelka pub in downtown Bratislava, Peter and two other university friends are reading a free, eight-page bi-weekly newspaper - Times International - from time to time raising their heads and breaking into deep guffaws or taking up one of the subjects broached in the paper as a point of discussion.

Peter and his friends are typical readers of what has become a small cult newspaper in Bratislava's city centre pubs, soon to celebrate its first birthday - they are men.

As well as its use of the Times title to draw readers' attention, the paper's immediate grabbing point is the semi-naked woman on the front of each issue.

The people behind the publication say the paper is meant to be light-hearted enough to inject a bit of humour into pub atmospheres, especially, as they claim, the Slovak pub pastime of discussing politics can at times become heated. But some women are arguing that the fact such a paper exists is testament to some of the failings in Slovak society's treatment of women.

"Our newspaper does nothing else but entertain people. It contains mainly jokes that add to a customer's sense of well-being when visiting a pub or restaurant and help him, at least for a while, to turn away from every day stresses and strains," says Anton Ivánek, the self-styled "editor-in-chief" of the Times.

The idea of the newspaper was born over a few beers in a pub, Krym, on Šafáríkovo námestie, at the beginning of last year. Its first issue appeared in a select number of pubs in February last year and rapidly became what its creators say is a "boredom killer" among regular pub customers.

"Customers have got used to it [the newspaper], some of them even take it home. We always run out of all our 250 copies. And then, they just keep asking for the next issue," said Táňa Petrovičová, one of the owners of Umelka.

Other owners and employees of pubs which take the Times International are quite happy to have the paper on their tables. Rather than worrying about putting off potential patrons who may be offended by the sight of a semi-naked woman on their tables, they say that the entertainment value is enough to liven up a pub and bring people together.

According to Petrovičová, "it simply entertains people. And that is why I think it was a good idea to have something like this in a pub".

Not to everyone's taste

Although the newspaper has developed a following in some pubs, not all who come across it are impressed. Women's groups and sociologists have denounced the publication as another example of Slovak society's tolerance of degradation of women.

Comenius University sociologist Darina Malová explained: "Any distasteful nude picture is always an insult to women. A lot of other women feel the same way, but they don't say anything about it. They are in these pubs with men and they feel it's better to just ignore it [the front page picture] and rise above such an insult."

She added that the reason pub owners are willing to have a newspaper with a topless woman on its cover on every table of their pubs is that they consider their pub to be an extension of their own private home and not a public area.

"It should not be distributed in public and pubs are public places. But it's allowed to be there through general indifference [of pubgoers] and because there is no law against it."

Ivánek explained, though, that the paper was only playing to the majority of its audience in using the front page image.

"Any pretty woman livens up the environment for men not only with her physial presence but also with a glance at her in a newspaper. And so far pubs are still frequented more by men than women," adding that the picture often produces an immediate common bond between male drinkers.

But not all women who come across Times International are shocked by its contents or ready to condemn the publication. Gabika Miklošová, of the pub Bax says, "It's not pornographic and if there's also something funny written underneath the [front page] picture I even laugh".

Times International's cult popularity in the handful of pubs whose tables it currently adorns has reached the ears of other pub owners who say they would like to lay their hands on some copies for their own patrons.

"I would like to see Times International in our pub. It seems to be a good idea to give people something right in front of them when they sit down which offers entertainment. Usually people just get bored drinking their beers and groups begin to argue about politics. I am sure that this newspaper could help to cheer them up as well as avert the possible dangers when a discussion gets heated," said Miklošová.

However, the newspapers owners say they are unlikely to increase their print run just yet, demand or no demand.

"So far we haven't got any big plans to expand in the future. Our main goal is to get pub visitors to read Times International and be entertained," says Ivánek.