With a small Slovak flag pinned to his lapel, Fred Nicholson literally wears his politics on his sleeve, although the gesture is hardly necessary. The computer consultant, self-taught economist, minor publisher, and self-styled political dabbler eagerly expounds his views to anyone who will listen. From European Union and NATO membership to questions concerning minority rights, his talk is coloured with patriotic pride and an acute mistrust of foreign influence. On joining the EU: "Why should we have to join an organisation to prove that we are in Europe. The last time I looked we were in Europe, and we are as democratic as any other country [on the continent]." 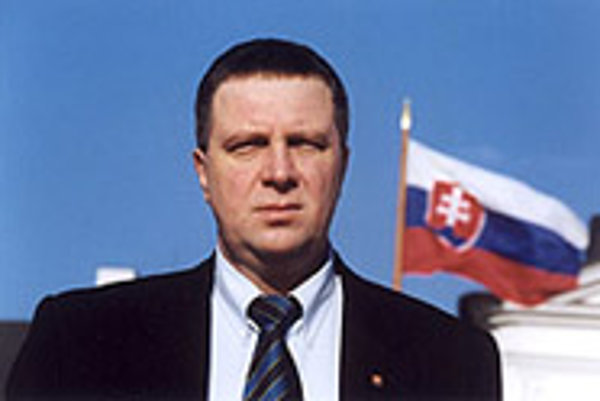 Font size:A-|A+  Comments disabled
With a small Slovak flag pinned to his lapel, Fred Nicholson literally wears his politics on his sleeve, although the gesture is hardly necessary. The computer consultant, self-taught economist, minor publisher, and self-styled political dabbler eagerly expounds his views to anyone who will listen. From European Union and NATO membership to questions concerning minority rights, his talk is coloured with patriotic pride and an acute mistrust of foreign influence.

On joining the EU: "Why should we have to join an organisation to prove that we are in Europe. The last time I looked we were in Europe, and we are as democratic as any other country [on the continent]."

On the question of NATO membership: "Just who is NATO supposed to protect us from? In 1989 [after the revolutions in central and Eastern Europe], the Warsaw Pact dissolved almost immediately. NATO hasn't reached that level of enlightenment."

Nicholson's views are incongruous with those of most Slovaks [according to a study in August 2000 by the Institute for Public Affairs (IVO) think tank, 72% of Slovaks supported EU accession while only 39% opposed entry into NATO - ed. note], but it is his history, not his nationality, that makes them truly unlikely.

Although Nicholson was born in Bratislava, he has lived most of his life abroad, England first, then the United States. He speaks English better than Slovak and has kept his anglicised name (he was born Alfred Nemeth) since returning to Slovakia.

But knowing firsthand the language and culture of the western world hasn't translated to accepting the principles of its ideology. Nicholson sees globalisation as dangerous for Slovakia, which has been, according to him, bullied by one country or another for most of its history, most notably by the Hungarians, Czechs and Russians. His bi-monthly newsletter Petržalčan warns of the threat of Slovakia being swallowed by western organisations and ridicules the current government for buddying up to the West.

"Slovakia is like a person that has just been divorced. It needs time by itself to recover from the ailments of communism and corruption and to build its character," he says. "The last thing we need is to start joining federations."

Nicholson has been making this point ever since returning to Slovakia in 1990, when he rushed back after living abroad for almost twenty years to start an investment fund. The Velvet Revolution had just happened, and Nicholson, who had left legally but had only visited a handful of times, was eager to be part of the change.

"The only reason I would have come back before the Velvet Revolution would have been to take part in a revolution" says Nicholson, who is vehemently opposed to communism. "But when politics changed, I wanted to influence the future of Slovakia. I wanted to improve things in some way."

The fund went bust, but Nicholson began taking an increasingly active interest in Slovak politics, hoping to win others over to his philosophy combining Slovak nationalism and staunch free market principles.

In 1994 he served as advisor to the Privatisation Minister Milan Janičina during the sixth month government of current Bratislava Old Town Mayor Jozef Moravčík. Searching for a foothold in Slovakia's political arena, he joined the right-wing Slovak National Party (SNS) and founded his small newsletter with its support. Nicholson is set to start a job as an assistant to an SNS parliamentary member in the near future.

Although the SNS's popularity dropped during the last year, Nicholson sees his future in politics working his way up the party's ranks. The SNS is often called Slovakia's 'nationalist' party, a tag Nicholson enjoys, despite its negative connotations.

"A nationalist is a person who takes pride in his country, although now it is used to browbeat those who have a different point of view to that of the West," he explains.

Political observers, however, say that since 1989 Slovak nationalists such as Nicholson have discredited themselves not by their isolationist stance on international alliances, but by their rhetoric about Slovakia's national minorities.

"Slovak nationalists typically think that there are external forces behind everything, and have accused Hungarians for anything that makes Slovakia look bad," says Michal Vašečka, analyst at the Institute for Public Affairs (IVO) think tank. "More recently the SNS has drawn negative press for its restrictive, often unconstitutional, solutions to Slovakia's Roma question."

Last fall, SNS parliamentary deputy Víťazoslav Moric was indicted for inciting racial crime after making statements that, among other things, suggested that Roma in Slovakia be put on reservations.

Nicholson, who says that he doesn't see a different solution to the Roma problem than the one offered by his party colleague, believes such views on the Roma should not discredit Slovak nationalists because they simply give a voice to what most Slovaks really think.

"In a private moment, when they are not posturing for the west, politicians in the current government would say the same things."

Nicholson is also convinced that the views of his party about Hungarians - however radical, even comical, they may seem to most - are valid. "There are many Hungarians working in the government, even outside the Hungarian [Coalition - SMK] party. I estimate their actual numbers to be around 30%. In the past two years they have grabbed more and done more damage than during the previous five governments."

When pressed for specific details, Nicholson says only that since the Hungarians have worked through a series of small steps, it is difficult to sum up precisely.

According to Vašečka, as a nationalist in Slovakia, Nicholson is an oddity because of his comfort with life in the West. "Usually Slovak nationalists, for example, don't speak foreign languages."

But Nicholson says that his nationalist feelings, which started young and were confirmed by later events, were never daunted by his time abroad.

Born in Bratislava in 1956, he remembers at a young age experiencing both pride in his country and anger at it being destroyed by communism. After his mother met and married an Englishman in 1970, he emigrated to England, where his opinions were strengthened.

"I found that Slovaks were by comparison hard-working and better educated [than the English]." he says. During his twelve years in America, Nicholson kept his Slovak citizenship and his nationalist leanings despite the tendency of most immigrants to America to fit in. "I met foreigners who would name the state in which they were living when people asked them where they were from. But I never stopped being a Slovak."

Nicholson's story is not unique. Professor of Slovak history at Ottawa University Mark Stolarik told The Slovak Spectator that nationalism is very strong among Slovak-Canadians, most of whom were political refugees from the wartime Slovak republic who lost their dream of an independent Slovakia in 1945.

"These people brought their nationalism with them when they came to Slovakia. Fifty years of rule by the Czechs and communists - whom they were right to charge with keeping Slovaks subjugated to a foreign ideology - and freedom to express themselves in Canada kept their feelings alive," he said.

"Now that Slovakia is free or independent they are afraid that someone - the Hungarians? - will threaten it, or threaten its partition."

Indeed, a fear stemming from Slovakia's history of being dominated by other nationalities in the region seems to guide Nicholson's thinking. He is convinced, for example, that Hungarians, both in Slovakia and abroad, are working to get lands back for Hungary in southern Slovakia dominated by Slovakia's ethnic Hungarians.

When asked if his 'us vs. them' mentality doesn't seem dated to his American friends, he scoffs. "Americans don't know how far back history goes. It may sound paranoid, but there is a thousand years of history to back it up."

But whether employing history or reason to make his case, Nicholson concedes that the nationalist feelings that led him back to his homeland and keep him immersed in politics are largely irrational. "It's like a parent's feeling for his child. If the child is threatened or insulted, the parent will react emotionally."

NEXT ISSUE: The Athlete