Although it been an unusually poor winter season for snow, hoteliers and managers of travel agencies in major Slovak winter resorts say they are satisfied with revenues so far. But the situation might change dramatically unless the snow comes soon.
Having banked profits from the Christmas holiday, when people go to the mountains whether there is snow or not, hotel managers now are anxiously looking for wintry weather. Without it the expected January wave of tourists will not come, they say, and with it precious revenues will be lost. 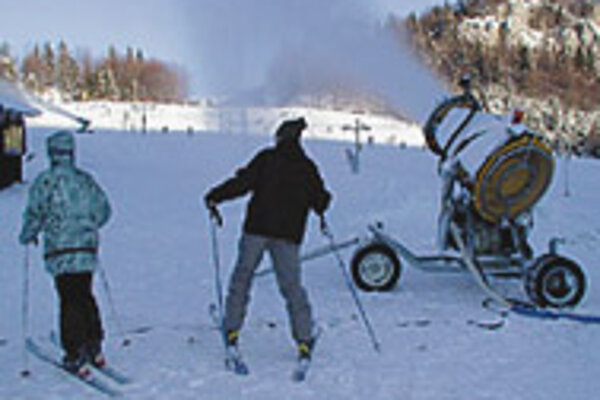 Font size:A-|A+0
Although it been an unusually poor winter season for snow, hoteliers and managers of travel agencies in major Slovak winter resorts say they are satisfied with revenues so far. But the situation might change dramatically unless the snow comes soon.

Having banked profits from the Christmas holiday, when people go to the mountains whether there is snow or not, hotel managers now are anxiously looking for wintry weather. Without it the expected January wave of tourists will not come, they say, and with it precious revenues will be lost.

"After Christmas and New Year's Eve we always have low guest numbers, but schools will again be closed for holidays in both Slovakia and Poland for several days at the end of February, so we expect another influx of customers to the mountains. The only problem is that their arrival depends on how many places here will have snow," said František Horník, deputy director of the Urán and Morava hotels in the High Tatras.

Government representatives in charge of tourism are already furrowing brows at the effect the unusually warm winter may have on revenues from tourism this season. The final figures are expected to be lower in comparison with pevious years.

In the first nine months of last year revenues from visists of foreign tourists reached $345.9 million, $11 million lower than in 1999. The situation has been further complicated as a result of the imposition of a visa regime for Russia as of January this year as well as for travellers from the Ukraine as of June last year.

Rich clients from countries of the former Soviet Union used to travel to Slovak mountains in large numbers, and some hotels have already reported large drops - as much as 35% in some cases - in revenues after the visa requirements were introduced.

Following the Christmas holidays mountian resorts rely on ski visitors for the majority of their income until the summer. While hoteliers have said that their revenue figures up to the New Year haven't changed in comparison with previous seasons, their profits for the rest of the season are already under threat.

"Our incomes will be lower this year, but we have to wait to see how big the drop will be. It all depends on how much snow the mountains get in the the next two months," said Vladimír Obdržálek of the Economy Ministry's tourism section.

Some companies painted an even less optimistic picture. Alexander Karaba, director of Ski Jasná, a company running several lifts and hotels in the Low Tatras said that the situation this season as far as revenues from operating ski lifts went, had so far been 70% worse than the last winter season.

The situation in most of the ski resort centers in Slovakia as far as snowfalls go is disheartening. While in standard seasons there is enough natural snow for skiing on most of the hills, now only ski centres which can use snow-making machines are operating lifts.

But with changable weather conditions and temperatures ranging from -5 degrees Celsius to +10 degrees Celsius on any given day, artificial snow has melted. In the High Tatras, which would normally record the greatest volumes of snow in Slovakia, only 5 out of 30 ski lifts were operating in mid-January.

Locals have described the present season as "extraordinary", saying that such little snow at this time of the year has rarely been seen.

"I have been living here for 25 years, but this is one of the mildest winters in the Tatras since I came," said Marián Šturcel, spokesperson for the High Tatra's National Park TANAP.

Despite the general lack of optimism some tourism experts remain hopeful that the weather, and with it revenue, situation will improve.

According to Bibiana Jarošová, general director of the Slovak committee for tourism the real winter season would hit mountains in coming weeks. "The weather is likely to get colder, so we might see some improvement in the rest of January and February," she said.

Meteorologists, however, are sceptical in their forecast for most of January. Jozef Iľko, a meteorologist with the Slovak meteorologic authority Slovenský hydrometeorologický ústav said that there would be little natural snow in the mountains over the next few weeks.

"Temperatures in the mountains will increase and this might worsen the situation for those who use artificial snow to run their ski hills," Iľko said.

And the problem is not likely to be confined to this winter, scientists say. They argue that what has this year been characterised as an unusually mild winter will become common in the new millennium.

Milan Lapin, head of the meteorologic and climatologic department at Comenius University said that with the onset of global warming there will be less snow in Slovakia's mountains.

"Resort centres and the government have to deal with this, and not only skiing but other different alternatives for winter tourism should be offered to tourists. I have already started to work on this in Austria and France," he said.

With one of the bright spots in what is widely considered a lacklustre Slovak tourist industry under threat the Economy Ministry says it has not yet looked at what measure it should be considering for winter tourism.

"No alternatives have yet been considered. But we aren't worried about this [global warming] yet," said Obdržálek.