Despite a global turndown in interest in telecoms markets the sale of licences for FWA (Fixed Wireless Access) services is likely to see fierce competition and mirror the success of the same sales in the Czech Republic, analysts and those preparing the sale have said.
However, firms interested in providing the service - which allows companies to supply offices by bypassing phone cables with a signal sent from a transmitter nearby - are still unsure of the timeframe for the licence sales. 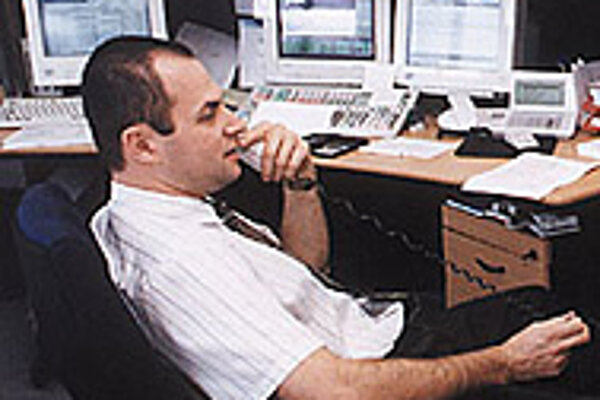 Font size:A-|A+0
Despite a global turndown in interest in telecoms markets the sale of licences for FWA (Fixed Wireless Access) services is likely to see fierce competition and mirror the success of the same sales in the Czech Republic, analysts and those preparing the sale have said.

However, firms interested in providing the service - which allows companies to supply offices by bypassing phone cables with a signal sent from a transmitter nearby - are still unsure of the timeframe for the licence sales.

Having said at the beginning of the year that it would not begin the process of granting licences for FWA operators before February local media reported that they would begin as soon as the second half of this month. However, claiming a lack of staff and problems with cable operator UPC, the Telecommunications Office (TÚ) has said that there is little chance that the tender will start before February.

"Right now we have little time to fully prepare documents," Milan Luknár, head of the TÚ told The Slovak Spectator January 15. "We are currently in preparations for conditions for a 'beauty contest' method of the sale, but with the problem with UPC we have had many people working on that who should have been working on the FWA licences. I don't think we will see the tender [start] before the middle of February."

The TÚ has for the last two weeks been dealing with a planned rise of prices far above the level of inflation by the cable TV firm UPC. The TÚ has said UPC cannot raise its prices by more than 12% while it reviews the firm's justification for the higher rises.

Firms interested in the FWA licences have not commented on the delays, but said merely that they are awaiting more information on the exact conditions of the tender.

"We are very interested in the tender and we are now just waiting to see what conditions the government sets out for it," said Dag Ole Storrosten, managing director of Nextra, one of the firms expected to bid for a licence. He added that he believed those conditions would be largely the same as in those set out by the Czech government in the sale of three FWA licences last year.

The conditions to be fulfilled by bidding firms are expected to include payment of a fixed price, determined by the Telecoms Ministry, a penetration and/or coverage rate, future investments, and possibly the call charge to the end user.

While auctions are considered to gain a better price and are more transparent, the 'beauty contest' form of sale, in which the package of conditions rather than just price offered determines the sales, is widely viewed as being kinder to the end user in terms of prices.

The high prices commanded in many telecoms licence auctions are often transferred in the form of higher call costs for customers as companies seek to recoup their outlay on the licence.

The Telecoms Ministry had begun the year with the announcement that its price tag for the licences had been cut almost in half after an independent analysis. Originally looking for 150 million crowns ($3 million) for a licence, not far off the price a single FWA licence had fetched in the Czech Republic - 150 million Czech crowns (186 million Slovak crowns) - the Telecoms Office (TÚ) said in early January that it was now only looking for between 70 and 80 million crowns.

Representatives of the TÚ said that the price had been cut because of projected investment costs for firms after they buy the licence. Experts have said that the cut in price is, however, no sign of a tail-off in interest in the licences, merely a reflection of the size of the Slovak market.

"I think that the original price had some comparison with the Cezch Republic, but our market is a much smaller one and we cannot expect to ask for that same price," said Luknár.

"There has been a downturn in interest in telecoms across the world, but mainly in mobile services. Since these FWA services will not compete with GSM operators and are not really 'mobile' services, the interest in them should be very high. We can expect some tough competition for the licences," said Boris Kostík, telecoms analyst at Slávia Capital brokerage house.

The TÚ has confirmed that between 10 and 15 firms have shown an interest in the FWA licences. They include GiTy, a.s. Bratislava, Callino (the Slovak division of the Czech branch of American company Formus Communications), and Nextra. In the Czech Republic's tender last year initially 28 companies entered the tender.

However, Nextra's Storrosten said that he was not convinced that there will be such interest. "I think that even 10 firms interested is a bit high. It will be revealing to see the real interest there is, who will really be in the bidding, when we start the tenders," he said.