State to establish a competitor for ST

Slovakia's telecoms market is widely considered one of the most dynamic sectors in the economy. Mobile operators EuroTel and Globtel have achieved almost a 22% penetration rate since GSM service began four years ago; the Internet service provider market is coming to the end of a period of aggressive consolidation, and new telecom license tenders may soon open the door to more foreign investment.
In such a fast-changing market, the monopoly on fixed line services held by Deutsche Telecom-owned Slovenské telekomunikácie (ST) appears more than an anomaly - it is potentially a drag on development. 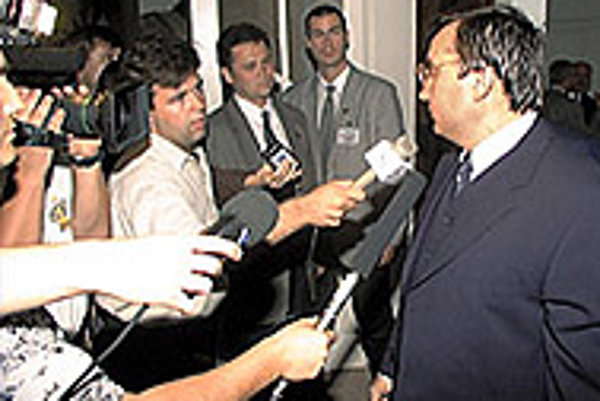 Font size:A-|A+  Comments disabled
Slovakia's telecoms market is widely considered one of the most dynamic sectors in the economy. Mobile operators EuroTel and Globtel have achieved almost a 22% penetration rate since GSM service began four years ago; the Internet service provider market is coming to the end of a period of aggressive consolidation, and new telecom license tenders may soon open the door to more foreign investment.

In such a fast-changing market, the monopoly on fixed line services held by Deutsche Telecom-owned Slovenské telekomunikácie (ST) appears more than an anomaly - it is potentially a drag on development. With full market liberalisation planned for January 1, 2003 (the date the ST monopoly comes to an end), the government fears that the cost for any investor of creating an entirely new fixed line network in Slovakia to compete with ST has become prohibitive. And if no new network is created, then Slovakia does not meet EC criteria for a fully liberalised market.

To prepare the market for competition (ie. to lay the bait for potential investors), Slovak economic ministers recently announced plans to create a new company, Energotel. Only a few months away from inception, Energotel is part of the government's plan to create a new competitor for ST now - and then to offer shares in Energotel at some point to large global players. By investing in a network already created, the thinking goes, telecoms giants need not baulk at the costs of entering what may prove to be a lucrative Slovak fixed line market.

The company, likely to begin operations in the first half of this year after it receives formal agreement from the government and an operating licence from the Slovak Telecom Office, will be owned by six state-controlled energy utilities which intend to use their existing spare telecom network capacities to give coverage across most of the state.

When founded, Energotel will operate to full network capacity, and is expected to offer services to Internet and mobile phone operators, rather than private or residential consumers, since its infrastructure is designed for high-speed transmission of data.

The company will use what experts say is a highly-efficient optic cable network already in place and owned by the six utilities' existing network supply routes. The firms have been building this network along with their core infrastructure since 1973, but have used only a portion of its capacity so far.

That part has been used for commercial telecom services for about a year by the utilities, but on an individual basis, not as one single entity. The utilities offer services mostly to Internet service providers (ISPs), but the volume of services currently supplied is not enough to provide real competition for Slovenské telekomunikácie (ST), the Telecoms Ministry says, and hence the need for Energotel.

The establishment of Energotel, which had been discussed for about a year, was from the outset viewed as a positive step towards improving quality through competition on the telecoms market and its full liberalisation.

However, while agreed on the benefits of Energotel, sector experts have said that the firm will still have a long way to go after its creation to become a competitor for the dominant ST.

"We welcome this as a step towards the growth of market quality and open competition. But at the same time it has to be said that Energotel has to improve services and infrastructure in order to be serious competition for ST," said Dag Ole Storrosten, general director of the ISP Nextra.

Government representatives remain ambitious about the company's potential to challenge ST. "We believe that Energotel will be another alternative on the telecoms market, and its presence on this market will contribute to a drop in prices in the areas in which it will operate," says Peter Benčúrik, spokesman for the Ministry of Economy.

However, concerns over Energotel's ability to compete with ST are connected with the company's need to install point-to-point connections with its customers, the so called 'last mile' connection from network endings in city or town centres to businesses or homes.

Storrosten explained that although current prices offered for transmission of data through the infrastructure of the energy utilities were more competitive than prices offered by ST, their cables ended in the middle of the city, and the last mile had to be realised through ST infrastructure.

"At the current stage of Energotel's infrastructure, with missing connections and space for improvement of its services, it's difficult to talk of competition with ST, which [already] provides a point-to-point connection to its customers," Storrosten said.

Others also questioned Energotel's potential to become a strong market player. "ST's monopoly for data transmisson was cancelled as of January 1998, and they [the individual utilities using their own networks] should have profited from it. But they have focused on other things. Simply put, their customer support, whether in prices or in marketing, hasn't really been competitive. This is something that they should improve," said Juraj Eliáš, IT director at Internet provider Euroweb.

But Economy Ministry officials in charge of the Energotel project are aware of its potential drawbacks and have already planned a scenario for development.

Márius Hričovský, an advisor to Economy Minister Ľubomír Harach, said that after its foundation Energotel would invest in installing the last mile connection to get as close to is customers as possible. "Energotel will invest into optic cables as well as into wireless connections to improve its infrastructure," Hričovský said.

The giant ST, though, is confident that it can more than hold its own against its newest rival.

"The quality of their network is very low, the service level that they offer and quality of staff currently doesn't match the demands and needs set by customers," ST spokesperson Gabriela Nemkyová told The Slovak Spectator.

The government is about to launch a tender for FWA (Fixed Wireless Access) licences which will allow telecoms firms to supply offices and even homes by bypassing traditional phone cables using a signal sent from a transmitter nearby. According to sector experts, Energotel is likely to invest into a licence in order to improve its connections with customers.

"Energotel has an eminent interest in owning a licence that would allow it to operate wireless connections," said Hričovský when asked if the new firm would bid for the licence to fill in the missing last mile connection link with end-users.

Energotel will not be able to bid for the FWA until the government approves a document on its foundation and it receives an operating licence from the telecom authority. The Slovak Telecom Office reported earlier this month that the tender wasn't likely to begin before the middle of February.

Peter Čapkovič, account manager with telecom firm Global One, said that if Energotel managed to get one of the licences, it would take little time for it to get a wireless access service running. He estimated the service would involve operating costs of over 50 million crowns and would require six months to build.

He also countered criticism of Energotel's current services, saying that if Energotel manages to make up for its missing last mile it would strengthen its quality. "Energotel definitely has the potential to bring greater flexibility to the provider/customer relation, something that it is doing already," Čapkovič said.