From time to time I receive packages from the US with American pancake mix. When this happens, I usually invite a Slovak over for an American breakfast. When finished eating, my guest turns to me and asks, "How do you make such pancakes?"
American pancakes, which are thicker and fluffier than Slovak pancakes, come from a box. I point to the box.
"But what ingredients are in the box?"
That's like asking an American, 'What ingredients are in a cucumber?' I make a safe guess. "Flour." 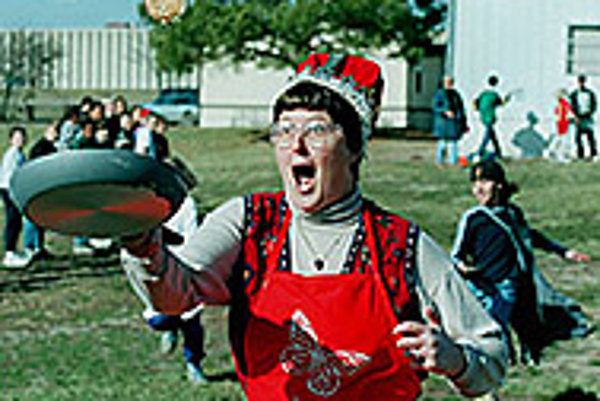 Font size:A-|A+0
From time to time I receive packages from the US with American pancake mix. When this happens, I usually invite a Slovak over for an American breakfast. When finished eating, my guest turns to me and asks, "How do you make such pancakes?"

American pancakes, which are thicker and fluffier than Slovak pancakes, come from a box. I point to the box.

"But what ingredients are in the box?"

That's like asking an American, 'What ingredients are in a cucumber?' I make a safe guess. "Flour."

Of course Slovaks (the women anyway) know exactly how to make their pancakes from scratch. Not only that, they know how to turn sugar, animal fat, flour and real fruit into tasty deserts. And when they want to eat foods derived from potatoes, they start with whole potatoes.

It wasn't long ago that Americans cooked that way too. My grandmother produced entire meals from scratch, pickled her own vegetables and once a year made home-made jam. But in the last two generations, American technology has made ready-made foods so convenient and cheap that those culinary skills have gone the way of the dinosaur. As a child, watching my grandmother in the kitchen was like watching a character in an old movie.

The trend extends into all areas of life. One time my grandfather tried to tell me how to dig a ditch. The idea seemed funny to me - there were machines that dug ditches, just as there were reputable factories making pickles. I never learned how to dig a ditch, or make pickles, or build something with my bare hands, or make a fire, or properly milk a cow, or understand where the water coming out of my faucet comes from.

It is no exaggeration to say that almost all knowledge necessary to directly adapt the Earth and its recourses for basic survival is absent from the ken of my generation. If a nuclear war or a natural catastrophe left the human race in a Darwinian scramble for survival, we would be the most helpless creatures in the history of the planet.

Slovaks on the other hand (especially the women) would do quite well in a post-apocalyptic scenario.

Obtaining food wouldn't be a problem. Most Slovaks have gardens, and a great deal of them have killed an animal. I discovered the latter as an English teacher when a pretty, stylishly dressed student informed me that she would be absent on Monday because she was going home to help her mother slaughter 20 pigs.

Clothing wouldn't be difficult either. Most Slovaks (the women, that is), have basic sewing skills, and many have more than that. Several times I have complemented friends on an article of clothing and had them say, "Thanks, I made it."

Even more impressive is the number of Slovaks who have built their own houses. I once drank borovička in a small village with a Slovak man who seemed neither very motivated nor talented, yet had built the house he lived in.

And those are only skills crucial to survival. Secondary talents come up all the time. I know Slovaks who didn't enjoy the film The Blair Witch Project. Why? Because the premise was flawed. Any Slovak who has ever been camping (and they have all been camping) knows that if you are lost in the woods and come across a river you follow it downstream. Eventually it will lead to something. In the film the three Americans cross the stream twice before finding their deaths.

And just last month I learned from a Slovak that it is possible to split an apple in half with my bare hands, and how to fold over the tip of a rolled poster so that it holds, and to grab my ear lobes in the wintertime when I have burnt my hands on something hot.

Living among humans with such a closer and more intuitive relationship with our planet calls to my attention one of the basic problems of my American ilk. Fame and wealth are our supreme goals. But the majority of us will never reach those goals.

And unlike Slovaks, or our grandparents, we will not be comforted by the skills we have forged in learning how to live in our natural environment, how to survive and flourish by training our hands and minds to use what it has to offer. We will never know the satisfaction of living in a house we have built, or of making a guest pancakes from scratch.