Prime Minister Mikuláš Dzurinda's confirmation at the World Economic Forum in Davos that the German financial leviathan Deutsche Bank was interested in the purchase of Slovak state-owned bank Všeobecná úverová banka (VÚB) was denied January 30 by the bank's chiefs.
Attending the annual forum at the Swiss resort the Slovak prime minister, as well as Deputy Prime Minister for Economy Ivan Mikloš, had told media that the German bank was considering the purchase of a 70% stake in VÚB, something which was later rejected by Deutsche Bank's head Rolf Breuer. 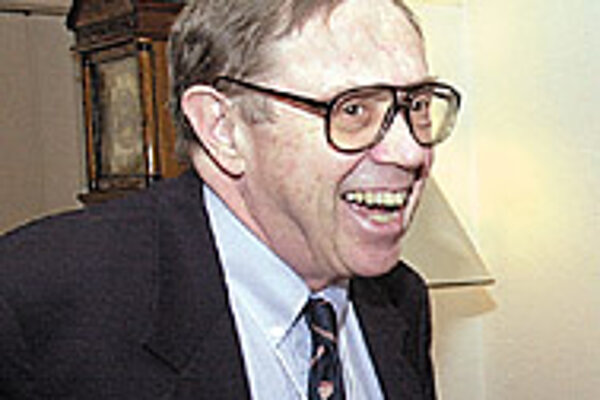 Attending the annual forum at the Swiss resort the Slovak prime minister, as well as Deputy Prime Minister for Economy Ivan Mikloš, had told media that the German bank was considering the purchase of a 70% stake in VÚB, something which was later rejected by Deutsche Bank's head Rolf Breuer.

But the rebuff did little to damp the optimism of the prime minister and his team following the Swiss trip, a mood which they will try to sustain this month for the 'Month of Slovak Culture' celebrated in New York.

"Davos was a success for us," said Katarína Mathernová, advisor to Deputy Prime Minister Mikloš, and an attendee at the forum. "Events like this always give us the chance to gain good international exposure and present ourselves to businessmen and other countries' politicians and meet them on a bilateral level. At Davos a lot of these such meetings were very fruitful."

Dzurinda had returned to Slovakia January 28, leaving Mikloš to represent the nation at the rest of the event, and immediately announced that he had had what he described as successful meetings, many of them relatively high-profile, with heads of state, other prime ministers and, importantly for Slovak foreign direct investment (FDI), heads of multi-national corporations.

The prime minister, clearly upbeat about FDI chances this year and anxious to refute suggestions that the government was lagging in attracting foreign investors, added to his Deutsche Bank statement the revelation that negotiations were on-going with the auto giant Daimler-Chrysler.

Rejecting criticism in some media that the January 22 announcement that Slovakia had been overlooked in regional bidding for a $440 million investment from BMW was a failure, the PM said that other car firms were now showing strong interest in Slovakia as an investment destination.

"They [DaimlerChrysler] want to invest in Slovakia, and we are working hard to make that a reality," he said.

The statement was a surprise for many analysts, who said that the announcement of the firm's intention to invest while still in talks could have been a mistake.

"They could have been a lot more subtle. It would be better to just keep quiet about these things while negotiations are going on. And it's not just that someone may back out of an investment straight after this, but that Slovakia is putting itself at a disadvantage, in that a firm will say, 'oh yes, they really want us, so now we can arrange a much better price or conditions'," said a source in the investment community who asked not to be named.

The PM's comments brought back painful memories of another similar PR gaffe during the BMW bidding process. In November last year news of an unofficial meeting between investment agency SARIO and BMW representatives had been leaked to Slovak media, drawing immediate criticism from the Slovak honorary consul to Baden-Wurtenburg in southern Germany, Roland Kissling.

Kissling said at the time that the leak had jeopardised the chances of Slovakia landing the investment, and was a sign of the inexperience and ineptitude of Bratislava's FDI team. However, SARIO, ministers and BMW itself denied the accusations.

Both the Economy Ministry and government investment agency SARIO confirmed for The Slovak Spectator that negotiations with DaimlerChrysler were going ahead, but declined to offer further comment on anything either Mikloš or Dzurinda had said.

However, some experts, including Marek Jakoby of the economic think-tank MESA 10, doubted that Dzurinda's comments would have any effect on the outcome of talks with DaimlerChrysler.

"I really don't think he did anything wrong or anything that would ruin or damage any chances of investments. There were no particular locations or numbers used and therefore he didn't wreck anything. There was nothing harmful said," Jakoby explained.

Despite the possible PR hiccup, many observers have agreed with Dzurinda's assessment of the meetings, and emphasised the importance of the meeting as a ground for furthering Slovak economic and foreign policy.

"I don't think that a forum such as Davos is a place where real deals are made, so it's not important in that sense, but it is very important for meeting leading European and world businessmen and for allowing government representatives from different countries to meet." said Jakoby.

For Mathernová, Davos was a prime example of this, especially in Slovak foreign policy.

"We had excellent feedback on the progress that Slovakia is making, especially with legislation. But one of the most important things we achieved in Davos was having very good meetings with the new US administration, in which we got support for our integration into NATO," said Mathernová.