The state-run Slovenská Televízia (Slovak Television - STV) is in trouble. Saddled with over 700 million crowns ($17.5 million) in debt and a legacy of political meddling, STV is in dire need of a lifeline from its grudging masters, politicians whose interests have long been better served by a vulnerable public station than an independent one.
STV's woes were brought to the fore on January 23 with the announcement that 350 of the station's 2,500 employees would be fired. Citing a financial crisis, Culture Minister Milan Kňažko also proposed a 63% increase in the viewership fees that most Slovak households pay. 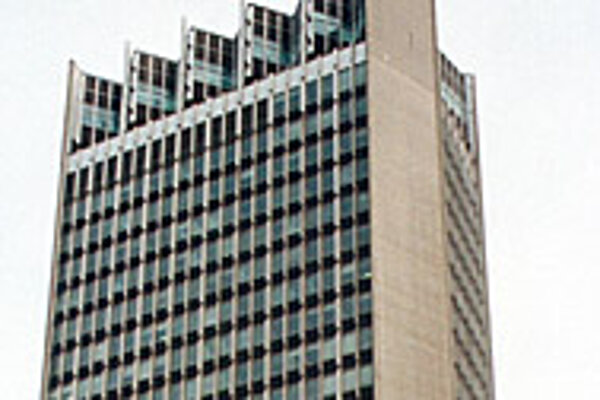 The state-run Slovenská Televízia (Slovak Television - STV) is in trouble. Saddled with over 700 million crowns ($17.5 million) in debt and a legacy of political meddling, STV is in dire need of a lifeline from its grudging masters, politicians whose interests have long been better served by a vulnerable public station than an independent one.

STV's woes were brought to the fore on January 23 with the announcement that 350 of the station's 2,500 employees would be fired. Citing a financial crisis, Culture Minister Milan Kňažko also proposed a 63% increase in the viewership fees that most Slovak households pay.

Analysts and STV insiders warn that this is just the beginning, that the station is floundering and lacks leadership, and that a massive transformation is needed to right STV's sinking ship.

"The 11 years [since the fall of communism] have deeply affected Slovak Television from within and without," said the Culture Ministry's media department head Martin Šmatlák. "At this point, ST finds itself on the verge of massive decay and potential collapse."

To begin with, pundits say, political interference in the station must be eliminated by legislation (principally a new 'STV Law') guarding its independence. Furthermore, as all major contracts signed by STV must be approved by various ministries, the station must have its hands freed from bureaucratic control if it is to compete on the media market with private behemoths such as the popular TV Markíza. Finally, STV's huge debt has to be paid down from state coffers, and its use of funds made more efficint and transparent.

In short, STV must be allowed to work more independently of the government, yet needs the government's cooperation for the needed laws to be passed, and massive government assistance just to get back on its feet. The dilemma has defeated the few real attempts to resolve it, and has atomized opinion in the media community on how best to proceed.

In the eye of the STV storm is the Culture Ministry, accused of sitting on its proposed STV Law since having drafted it in 1999.

The law, which is expected to be discussed by parliament in March 2001, is supposed to install safeguards against political interference by altering the make-up of the STV Council, the station's leadership body, so that eight of its 15 members would be apolitical appointees. The council currently has nine members, only one of whom is a non-political, or 'professional', selection.

The ministry has refuted allegations that it has moved too slowly on the amendment. Šmatlák explained that the STV Law had been repeatedly delayed due to the "different - very often contradictory - opinions on how STV should be run and financed."

But critics insist that the ministry and its minister have handled the STV situation incompetently. Ján Füle, the head of the Slovak Syndicate of Journalists (SSN), called the former actor Kňažko a "minister of theatres and ballet", because of his general disinterest in media matters.

"Kňažko only recently opened a media section at the ministry [on January 1, 2001], a full two years after he became Culture Minister," Füle complained. "There's your proof."

The ministry's Šmatlák defended his boss, saying that the opening of the media department itself testified to Kňažko's interest in solving the mess.

"Until now the responsibility [for preparing media legislation] lay with the state-run Media Information Centre (MIC)," Šmatlák said. "But over two years the MIC wasn't able to prepare the necessary legislation, so Minister Kňažko decided to disband the MIC and create a section more directly under his control."

As important as political independence is, officials say that the station's debt is an even more urgent matter, as it is crippling operations and making STV even more reliant on the government for financial assistance. STV's debts currently stand at 708 million Slovak crowns ($17.5 million) and climbing; over 100 million crowns of the figure was racked up over the second half of 2000.

STV Communications Department head Milena Rážová said that the current financial hardships had roots going as far back as 1986 when STV had its budget cut for the first time, even though "prices on the market were starting to increase."

"1993 was also very pivotal," Rážová continued. "As the Czech and Slovak Republics split into two independent states, STV alone suddenly had to feed programmes to two channels without help from the Czechs, but the station received no money to cover the increased production demands."

Yet another blow came in 1996, when the Slovak Finance Ministry raised radio-communication fees by over 100%, Rážová added. STV has to pay the fees to telecoms monopoly Slovenské Telekomunikácie (Slovak Telecom - ST) for having its signal transmitted.

Frustrated observers believe that STV's debt should no longer even exist, accusing the government of missing a golden opportunity to erase the liability during the privatisation of ST. While by the end of August 2000, STV's debts to Slovak Telecom exceeded 600 million crowns, clearing the debt of public electronic media was not made part of the contract with Deutsche Telecom for the sale of ST.

The government has since suggested that STV's debt be settled by using profits from the privatisation of state-owned gas utility SPP, which is expected to be completed by the end of October this year.

But getting STV to use the money is has more efficiently is also part of the equation. Since the arrival of Markíza on the market in 1996, said Šmatlák, STV's revenues from advertising had plunged, at a time when transmission costs were rising and income from viewership fees stagnating. Kňažko on January 17 proposed that the bleeding be stemmed by hiking monthly viewer fees from 105 crowns to 170 ($2.23 to $3.62). Welcomed by STV, the idea was roundly criticised as preferring a band-aid when major surgery was required.

"Rather than seeking real change in STV's financing," said Ján Budaj, Vice Chair of the Parliamentary Media Committee on January 23, "a temporary solution has been suggested at the expense of citizens' wallets."

The ministry's Šmatlák countered by saying that the increased fees had never been considered a panacea, but a natural price increase whose time was long overdue. "The increase was inevitable," he said. "We hadn't raised TV fees for three or four years."

STV's Rážová explained that the debt situation and the political domination of the STV Council went hand-in-hand. As the unprofitable station's debts mounted over the 1990s, she said, the state's involvement in STV had intensified.

Others charge that the situation has never been remedied because STV's struggles benefited past and present governments.

"STV's problems have never been seen as sufficiently acute to draw a call to action," Šmatlák said. "Under the previous government [of Prime Minister Vladimír Mečiar], when many financial problems were reaching boiling point, the government wasn't intersted in changing the situation because they were profiting from having a TV station dependent on them."

That dependency - and the Mečiar coalition's majority in parliament - allowed the government to have Igor Kubiš elected STV director by the legislature. A staunch supporter of Mečiar's Movement for a Democratic Slovakia (HZDS), Kubiš turned the station into "an effective outlet of pro-HZDS propaganda", said Nataša Sláviková, a former member of both the Council for Radio and Television Broadcasting and the state-run MIC.

Over the past decade, Sláviková said, fully 11 different directors had run the station at various times, each taking a different approach than his predecessor. Appointments such as the HZDS's Kubiš, she said, had damaged the station's reputation as a source of objective news.

But political machinations with STV, analysts point out, did not cease with the downfall of the 1994-1998 HZDS coalition government. The current government of Prime Minister Mikuláš Dzurinda has also come under fire for its disinterest in helping STV become independent.

"Politicians' indifference towards preparing new laws for public electronic media can be explained as an expression of content with the current situation, which basically suits them," Füle wrote in the Global Report on Slovakia 2000, published by the Institute for Public Affairs (IVO) think-tank in Bratislava. "After all, if STV is kept financially and politically dependent, it is an easier target for political manipulation."

The Culture Ministry's Šmatlák said that the problem of political interference could be solved by stacking the STV Council with more professional than political appointees. On the current council, only ex-central bank governor Vladimír Masár is a non-poitical appointee, albeit one who was ratified by parliament.

As a further guard, Minister Kňažko has promised that under the proposed law the general director would be elected by the STV Council, instead of parliament.

Not surprisingly, some critics say that the promised safeguards are still insufficient. "[Even under the new STV Law], STV Council members will continue to be elected by parliament," Sláviková said, adding that even the 'professional' Masaá "wouldn't have had a chance [of being elected to the STV Council] without some kind of political backing."

"The proposed Council would [still] be a tool of the governing party or coalition," said Werner Rumphorst, head of the Geneva-based European Broadcasting Union (EBU) legal department, which advises post-communist democracies on political independence in state media.

Rumphorst said that to avoid political manipulation and its consequences, the council should consist of neither professional media experts nor political party nominees. Rather, he said, the ruling body should be made up of "men and women from the street, who together represent the different interests of Slovak society at large."

Moreover, he continued, a five-member administrative board should be established to take over tasks from parliament, such as "approving the annual budget and accounts, approving certain major financial contracts, and the like". Experts in administration and finance, the members of the board would be appointed by the council.

"The board's role would be to control how public money is spent. This would assure the citizenry that its money is being used wisely, and that management is under pressure to work as efficiently as possible, in full financial transparency," Rumphorst said.

"State TV should not be led by a political nominee. And the leader should in turn be controlled by [the Board's] professionals," he added. "The current STV council is just a leftover from the socialist system."