The last month has taken a toll on Anna Malíková, the outspoken leader of the country's far-right Slovak National Party (SNS). Scandal after squabble has left the opposition party boss visibly tired and edgy as she tries in vain to evade the crush of media waiting for her in parliament.
Her political friends appear to have turned on her: members of her own party have grown disgruntled under her leadership, while relations are strained with fellow opposition party Movement for a Democratic Slovakia (HZDS), and rumours have sprouted that she has a Russian boyfriend, Vasilij Alexander Belousov, formerly wanted for fraud by Russian authorities. 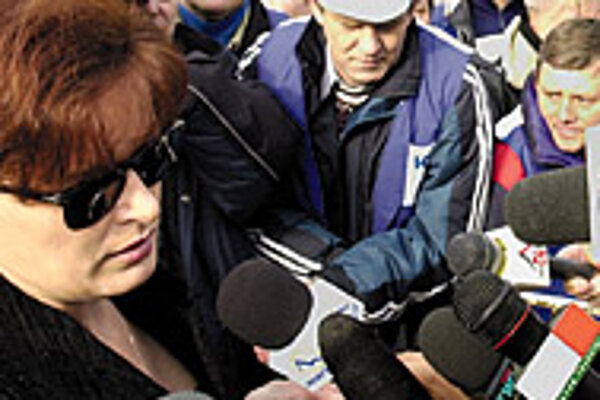 Font size:A-|A+0
The last month has taken a toll on Anna Malíková, the outspoken leader of the country's far-right Slovak National Party (SNS). Scandal after squabble has left the opposition party boss visibly tired and edgy as she tries in vain to evade the crush of media waiting for her in parliament.

Her political friends appear to have turned on her: members of her own party have grown disgruntled under her leadership, while relations are strained with fellow opposition party Movement for a Democratic Slovakia (HZDS), and rumours have sprouted that she has a Russian boyfriend, Vasilij Alexander Belousov, formerly wanted for fraud by Russian authorities.

Even Malíková's own nephew appears to have abetted her enemies by selling private romantic photos featuring the embattled SNS head and Belousov to the weekly magazine Plus 7 dní for 10,000 Slovak crowns ($213).

The turmoil has not completely robbed Malíková of her stubborn confidence, however. She dismisses the recent scandals as "dirt" dug up by the ruling coalition which fears her party's growing power.

"Under my leadership, the SNS's image has improved," she told The Slovak Spectator in parliament February 6. "It's logical that the coalition is interested in discrediting the SNS. When my popularity began increasing as well, I knew that they would start pouring bucketsful of dirt over my head. Who else, after all, would profit from it?"

Political analysts, however, doubt the conspiracy theory, saying that the SNS's often inflamatory rhetoric has only appealed to a relatively small part of the population, and has always prevented it from ever becoming a major political player on the Slovak scene.

"Why would the coalition bother with her?" asked political analyst Miroslav Kusý from Bratislava's Comenius University. "Malíková is leading the SNS lower in the polls herself, and the party's [controversial] politics alone are enough to discredit the SNS without anyone else's 'help'."

Statistics also belie Malíková's belief that her party's strength is snowballing. Under the leadership of Ján Slota - who was forced from his post in 1999 after a series of drunken public outbursts, including a notorious call to arms at a party rally that year for Slovaks to man their tanks and "go flatten Budapest" - the party enjoyed steady voter support of around 10%. But a poll carried out in early January 2001 by the Public Opinion Research Institute (ÚVVM) showed support slightly down at 8.5%.

Internal corruption has not helped the SNS cause. The party passed a vote of no-confidence against SNS Vice-Chairman Viliam Oberhauser on January 29 after determining that his election to the post last year had been rigged. Party members Katarína Pinterová and Ján Hrabovský said deputy chairman of the election supervisory commission, Dušan Mašlonka, had fixed the voting process by ordering four ballots be replaced with new ballots baring Oberhauser's name. Mašlonka resigned from his party post after the vote against him. Pinterová and Hrabovský were also reprimanded by the SNS.

Nor has Malíková's personal life improved the party's image, as the public has been agog with tabloid reports of her romance with the former Russian fugitive. When Plus 7 dní ran the photos of Malíková and her 'boyfriend', Malíková was incensed at the magazine, accusing it of stealing the photos from her house. Shaken by news that her nephew had handed them over, she nevertheless stuck to her guns and blasted the magazine for "still printing them without my approval".

But perhaps the most harmful in the long run are the political bridges Malíková seems intent on burning. The embarrassing 'Russian boyfriend' situation was exacerabated when SNS party-mate Víťazoslav Moric told media that Belousov had called him on his mobile phone and made "disgusting and filthy" warnings, including death threats, against SNS members Štefan Zelník, Ján Sitek, Slota and Moric, all of whom are said to favour a return of Slota as party boss.

Both Moric and Malíková refused to comment on the phone call. "I'm not his [Belousov's] lawyer, and I'm certainly not a detective," Malíková said. "But I know that he [Belousov] is currently taking certain steps to explain the whole affair to the Slovak media."

But while the SNS tries to patch up its internal differences, a fresh quarrel is brewing with its opposition partner. HZDS member of parliament Marta Aibeková said that her discussions with SNS deputies showed Malíková was losing support.

"And I can understand why," she said. "If Malíková is going to be so impulsive, like when she decided to criticise the HZDS [in a February 2, 2001 article in the daily Národná Obroda where she blamed the HZDS for ignoring an agreement between the two opposition parties], without first contacting us to discuss the problems, then I can understand their reservations about her."

Malíková has recently been a strong critic of the HZDS, with whom the party signed a deal to coordinate political strategies in 1999, saying that since last autumn the HZDS had ignored SNS suggestions by "doing stupid things such as starting a political relationship with the [RIS] Roma party before the November referendum [on early elections]."

The HZDS, meanwhile, accused the SNS of "gambling with their parliamentary votes" when Malíková pledged SNS support for a constitutional amendment favoured by the government if the ruling coalition ignored the demands of its Hungarian Coalition (SMK) partners.

"Malíková is pulling the party apart with her destructive tactics," said analyst Kusý. "And she doesn't understand that without the HZDS, her party can't achieve much."

But Malíková still thinks otherwise, insisting that her party can thrive without the HZDS and stressing that the recent "discreditation campaign" was proof that the party was doing well on its own.

"The very fact that I am being attacked is evidence that the SNS is becoming dangerous for our political rivals," she said. "The SNS remains a major player, and all I can say is that 'the dogs may be barking, but the caravan goes on'."