New York, Washington: Prime Minister Mikuláš Dzurinda led a Slovak charge into the US to promote national interests on a frantic blitz of New York city and Washington D.C. January 31 to February 2. According to the account of one eye-witness, the Slovak leader was in top form, handling difficult questions with aplomb and candour.
Making the trans-Atlantic crossing on a Russian-built Tupolev aircraft, the PM and his entourage had a three-hour stopover in Iceland for re- fueling, raising concerns that the Slovak group would be too fatigued from the hard trip to put forth the country's best foot. 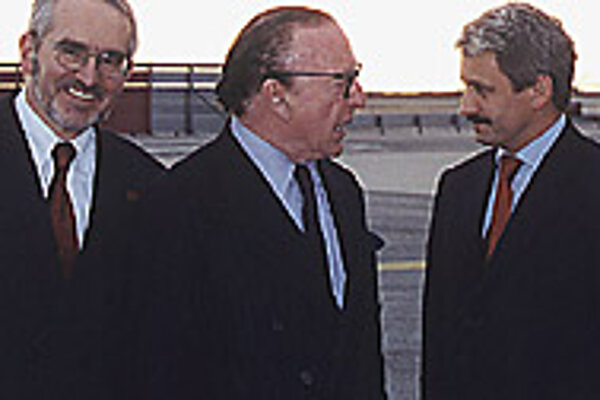 Font size:A-|A+  Comments disabled
New York, Washington: Prime Minister Mikuláš Dzurinda led a Slovak charge into the US to promote national interests on a frantic blitz of New York city and Washington D.C. January 31 to February 2. According to the account of one eye-witness, the Slovak leader was in top form, handling difficult questions with aplomb and candour.

Making the trans-Atlantic crossing on a Russian-built Tupolev aircraft, the PM and his entourage had a three-hour stopover in Iceland for re-fueling, raising concerns that the Slovak group would be too fatigued from the hard trip to put forth the country's best foot.

But according to US Ambassador to Slovakia Carl Spielvogel, who accompanied Dzurinda on almost all of his meetings, that was far from the case.

"The prime minister handled himself extremely well," he said. "All of the other members of his group were suffering from a lack of sleep, but this marathoner looked as though he were ready for a marathon [Dzurinda has run 38 marathons - ed. note]. He was very impressive."

Dzurinda said that the main aim of his visit had been to promote Slovak readiness for NATO membership. "I want to sleep well at night," he told The Slovak Spectator during the trip. "I'll only sleep well when my country is permanently secured. And there is no better safeguard for that than joining NATO."

With the Republican government of George W. Bush taking over the White House, concerns have arisen that the new administration would be more isolationist than its predecessor under Bill Clinton, and therefore not view NATO expansion as an important goal.

While the neighbouring Czech Republic, Poland and Hungary were accepted as new NATO members in March 1998, Slovakia was excluded for failing to fulfil political criteria under the previous government of Vladimír Mečiar. But after Dzurinda took power in September 1998, Slovakia began to win back the trust of Alliance members and now hopes to be admitted by 2002.

According to Dzurinda, who met with several key members of the Bush team, US support for Slovak integration remains strong as the Slovak-set deadline approaches. At the traditional National Prayer Breakfast in Washington on February 1, Dzurinda shared a table with Senator Carl Rove (a Bush policy strategist) and Senator Pepe Domenici (Republican, New Mexico).

Although the Prime Minister never actually met the new US President (Bush sat at a table nine metres away), Dzurinda reported that Domenici said he "supports Slovakia's aspirations to become a member of NATO."

Dzurinda spoke briefly with four other senators, all of whom he reported were equally bullish on Slovakia joining the international alliance.

Dzurinda also met with several major players in the US media, at the invitation of Ambassador Spielvogel, himself an experienced journalist. Spielvogel said he had been struck by Dzurinda's presentation of the country.

"[Dzurinda met with] Paul Steiger, the managing editor of the Wall Street Journal, and Robert Thompson, the US editor of the Financial Times, and Walter Isaacson, who is the editorial director of all the Time magazine publications," he said. "Isaacson and one of his associates were fully prepared for the meeting. The prime minister and I were both surprised when the first question was 'why did you form a new party?' But he handled himself extremely well in that meeting."

Dzurinda formed a new party, the Slovak Democratic and Christian Union (SDKÚ) last year in an attempt to unite centre-right elements in his 11-member ruling coalition.

Spielvogel said that Dzurinda and his team impressed at every opportunity, leaving a positive image of Slovakia with the US representatives. The Slovak PM also met former Treasury Secretary Robert Rubin, now the vice chairman of City Group, and was interviewed by the Council for Foreign Relations, the US' most prestigious foreign policy association. The Council asked about Slovakia's transition process, the political role that Mečiar would play in the future, Slovakia's NATO and EU ambitions, its 18% unemployment rate, and what the government was doing to attract investment.

"People at the Pentagon, people at the state department, and people in the government said that uniformly they had been impressed with the [Slovak] leadership they have met," the ambassador said. "And they were talking particularly about Foreign Minister Eduard Kukan, Deputy Prime Minister for Economy Ivan Mikloš, Dzurinda, and of course Madame [Brigita] Schmögnerová [the Slovak Finance Minister].

"The medium is the message," Spielvogel continued, "and that's what's important. I'm sure that Mikloš will make the same impression [when he visits the US at the end of February for a central European investment conference in New York]."

The Slovak team also took the opportunity to visit the opening of the Slovak Month of Culture in New York City, which attracted 1,200 guests and went off without a hitch - that is, except for the unexpected attendance of Rudolf Žiak.

A member of the opposition Movement for a Democratic Slovakia (HZDS), Žiak is wanted for questioning in Slovakia over his alleged involvement in Slovak secret service campaigns carried out across international borders aimed at thwarting central European countries' NATO ambitions and creating animosity between Austria and Germany (among other charges), all under the former 1994 to 1998 Mečiar government. He is currently staying in the US, and will not say when he intends to return to Slovakia.

But not even Žiak's untimely presence could sour the impression given by Dzurinda, said Spielvogel. "I'm trying to be objective about it, but I really have to say that I was impressed with his overall performance," he said. "When one realises that he was speaking about conceptual subjects in a language that is not his first language, he handled himself extremely well."

Added Dzurinda: "Slovakia must be active. And when I return in June [to open the new Slovak embassy in Washington], I'll continue this political offensive."