As a travelling Andy Warhol exhibition hits Bratislava this month, a museum devoted to the pop artist in the opposite corner of Slovakia struggles towards its 10th anniversary.
Located in a crumbling city of 7,000 in north-east Slovakia, the Warhol Family Museum of Modern Art in Medzilaborce was a dream come true for local art enthusiasts and Rusyn patriots alike when it opened in 1991. Warhol's parents were Rusyn - an ethnic minority in Slovakia numbering between 60,000 and 100,000 - from the small village of Miková outside Medzilaborce. The museum was to be a source of pride for the town and a valuable tourist attraction. 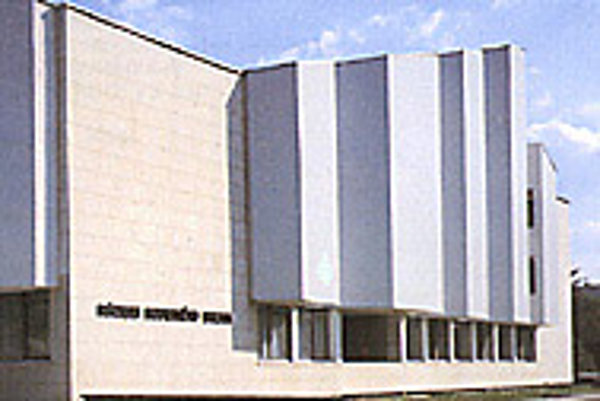 Font size:A-|A+0
As a travelling Andy Warhol exhibition hits Bratislava this month, a museum devoted to the pop artist in the opposite corner of Slovakia struggles towards its 10th anniversary.

Located in a crumbling city of 7,000 in north-east Slovakia, the Warhol Family Museum of Modern Art in Medzilaborce was a dream come true for local art enthusiasts and Rusyn patriots alike when it opened in 1991. Warhol's parents were Rusyn - an ethnic minority in Slovakia numbering between 60,000 and 100,000 - from the small village of Miková outside Medzilaborce. The museum was to be a source of pride for the town and a valuable tourist attraction.

But operating for nearly a decade on a shoestring budget, the Warhol Museum has never found solid ground: financing has been scant, and its home remains the town's former culture centre, a communist monolith that was intended to be a temporary solution in 1991.

The roof leaks, the city demands rent, and the building is embarrassingly large for a museum that has in its permanent exhibit only 17 original Warhols, a handful of memorabilia and a couple of paintings from Warhol's relatives. Late in 2000, the electricity in several rooms wasn't even working.

"This communist megalomania just isn't functional as a museum," complained museum director Michal Bycko, who for 10 years has been trying to find a better location. Of late, Bycko has been more a maintenance worker than art promoter.

"At the end of last year, we fixed the electricity and installed a desperately needed security system," he said. "So we are slowly removing our problems."

But the roof - repaired three times over - still leaks.

The museum was born out of collaboration between Bycko, other art professionals in the Medzilaborce area, and Andy Warhol's brother John Warhola, who first visited Miková in 1987 after his famous sibling's death. Warhola helped secure the paintings on loan from a New York foundation; the works make up the bulk of the museum's Warhol originals.

Around 10,000 visitors a year make the journey to the small city of Medzilaborce to see the modest collection, which include Warhol's famous screenprints of Campbell's soup cans and portraits of Vladimir Lenin and Ingrid Bergmann. Family artefacts such as photographs of Warhol's mother Julia and a shirt in which Warhol and his brothers were baptised, and paintings by Warhol's older brother Paul and nephew James round out the collection.

Although the museum has become a fixture in Medzilaborce life, it wasn't long ago that the Warhol's origins were known only to his relatives.

"If you go to the cemetery in Miková practically all you'll see is the name Warhola [Andy Warhol dropped the 'a'] . But people thought it was just a coincidence," remembers the artists cousin Helena Bošnovičová, who still lives in Miková.

Bošnovičová's mother was one of 12 Zavazký (the maiden name of Andy's mother Julie Warholová) siblings, and one of only two who did not emigrate to America during the lean post World War I years. Her family received packages regularly from Warholová, but kept their relation to the American artist secret after he became famous in the early 1960s.

"Andy wanted to keep his personal life private. He said, 'mama, don't tell everyone over there about me'," said Bošnovičová.

Warhol never visited his mother's homeland and was fond of saying, "I am from nowhere". But Rusyns point to his close relationship with his mother - the two shared an apartment for many years in New York City - as proof of their connection to the famous artist. Julie Warholová reportedly spoke often of home, and her son's first language was Rusyn.

But as late as 1987, Warhol was still being referred to in international media as the 'son of a Czech'. Word of the area's connection to Warhol was by then out in Medzilaborce, but materials collected by Bycko proving Warhol's nationality went unpublished.

"I sent them to a magazine, but they remained in the briefcase of some editor. It was communism, and Warhol was considered a bourgeois artist," said Bycko.

John's 1987 visit, however, made clear the family's roots, and in 1989 material documenting Warhol's origins were also published.

In September 1991 the Warhol Family Museum of Modern Art opened. The event was celebrated not only by citizens of Medzilaborce, but by all Rusyns living in Slovakia.

"Rusyns were confused by what happened during communism [when Rusyns were labelled Ukrainians by the government and forced to attend Ukrainian schools. Many Rusyns demanded Slovak schools instead. - ed. note]," said Anna Kuzmiaková, a journalist at Národny Novinky, Slovakia's only Rusyn language newspaper. "To realise that a Rusyn was an internationally famous artist helped us come to grips with who we are."

Despite the enthusiasm surrounding the news of Warhol's roots, Bycko says that political leaders in Medzilaborce have never grasped the importance of the museum in a region troubled by 30% unemployment.

"There is nothing else here," says Bycko. "We don't have an agricultural base, or natural or historical attractions, and most of our industry has closed down."

Bycko is angry that his small, struggling museum not only gets no support from the city but also has to pay rent. "They should be paying us. Any other city would be glad to have such a museum, and would sponsor it."

An old post office on Main Street was the original choice for the Warhol Museum, with plans for a library and art school. But money was sparse in the years following the revolution, and renovations were never finished.

"We had no other choice," says Bycko of the eleventh hour decision to start the museum in the former communist cultural centre.

Financing has also proven vexatious. The Slovak Ministry of Culture provides for the museum's day to day expenses, but has not increased funds to match rising prices for utility services. And the museum must find its own sponsors for the 10-15 other yearly exhibitions it hosts as well as trips abroad with its collection.

Bycko is hoping the city will forgive the rent this year and take steps to improve the building's facilities, especially the leaking roof.

He says he is proud that the museum got off the ground, has survived and made contacts in the international art world, but frustrated that conditions outside his control have reduced his efforts to "dilettantism".

Bycko is considering altering the museum so that it uses only part of the building, or moving to a different city altogether. But with anniversary celebrations in September planned for the current location, he'll remain both maintenance man and curator for some time to come.