Given the snail's pace of constitutional reform through the Slovak parliament, one could be excused for not regarding the amendment as a major victory for the government.
But the ruling coalition of Mikuláš Dzurinda, which unites nine parties including socialists, free-market reformers and Greens, has actually shown unusual unity on the Constitution, hammering out an agreement last week that seemed to assure it of the 90 votes it needs in the 150-seat parliament to have the measure passed. The coalition controls 91 seats; only one MP has said he may not support the reform. 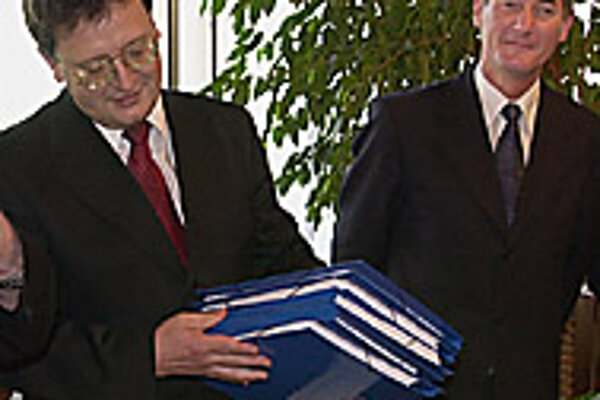 Font size:A-|A+0
Given the snail's pace of constitutional reform through the Slovak parliament, one could be excused for not regarding the amendment as a major victory for the government.

But the ruling coalition of Mikuláš Dzurinda, which unites nine parties including socialists, free-market reformers and Greens, has actually shown unusual unity on the Constitution, hammering out an agreement last week that seemed to assure it of the 90 votes it needs in the 150-seat parliament to have the measure passed. The coalition controls 91 seats; only one MP has said he may not support the reform.

Vital to Slovakia's EU entry ambitions and hailed by legal and political experts as the most important goal the government has yet set for itself, constitutional reform has survived weeks of haggling over narrow coalition party interests intact, and is now bogged down by opposition obstruction; it is expected to be finally ratified by the last week of February.

"Progress on the constitutional amendment recently proved that coalition parties have understood it's best for us when we work together," said Deputy Prime Minister for the Economy Ivan Mikloš in an interview with The Slovak Spectator February 6. "I don't know what the cause is [of the newfound cooperation] - perhaps with the next elections approaching there is no sense in thinking about alternative strategies."

Despite its appearance of unity, the government still has to get the draft through a fractious parliament. The originally projected February 13 deadline for ratification of the reforms passed with agreement still far off, as debates raged and the backlog of other parliamentary bills grew.

Debate on the constitutional amendments has been slowed in parliament by opposition filibustering by the Movement for a Democratic Slovakia (HZDS) and Slovak National Party (SNS). During the televised debates, all 42 MPs from the HZDS signed up to speak, with several of the monologues lasting hours. Less than half of the scheduled speakers had taken the podium by the end of the first gruelling week.

The coalition itself has also been blamed for the delay. The fact that it formally controls only one more vote than the 90 needed to pass the amendments has prompted some parties to suggest unexpected, controversial and idiosyncratic changes to the draft, knowing that the narrowness of the coalition's majority will get each demand at least a hearing.

The most controversial bid was submitted by the conservative Christian Democrat (KDH) party, which insisted on February 7 that abortions be outlawed in the constitution.

Other proposals were submitted by the Hungarian Coalition (SMK), which has long lobbied to have the preamble to the Constitution changed from the ethnically-based "We, the Slovak nation" to the more civic-spirited "We, the citizens of the Slovak Republic"; the Democratic Party (DS), which wants to limit the immunity from prosecution that members of parliament currently enjoy; and the Green Party, which wants the protection of caves to be written into the Constitution.

Political analyst Grigorij Mesežnikov, head of the Bratislava-based Institute for Public Affairs (IVO) think tank in Bratislava, said the importance of the reforms was both an invitation to grandstanding by the parties, as well as a powerful incentive to the coalition to find a compromise.

"When you look at the suggestions offered by different parties, you see that they are just trying to grab the attention of their potential voters," he said. "But at the same time, they are very well aware of the importance for the coalition to work together as one team and get this through parliament."

Indeed, an agreement on cooperation was reached on February 12 when Speaker of Parliament Jozef Migaš announced that the coalition parties had agreed to support the original draft amendment, regardless of whether their additional proposals were voted in.

Following the agreement, KDH chair Pavol Hrušovský said that the abortion issue would remain "a matter of principle", and that his party would initiate a vote in parliament on whether the ban on abortion should be included in the amended Slovak Constitution - but that it would support the draft no matter what the fate of its abortion proposal.

KDH detractors labelled the proposal political posturing that sacrificed women's rights in order to increase the party's sagging support: a February 13 Focus Polling Agency opinion poll gave the KDH voter support of 4.3%, below the 5% minimum needed to be represented in parliament.

"The KDH is trying to score political points with the public by taking a big step backwards with women's rights," said Katarína Čižmáriková of the Party of Civil Understanding (SOP).

Added Mesežnikov: "The KDH is hoping to win back some lost support, and because the constitutional debates are televised, they are taking this as an opportunity. But at the same time, they know that the passage of the constitution will be a huge feather in the cap of this government - they'll support its passage even if they don't get the ban on abortion."

Support for the abortion proposal is low, mustering only 26 members of parliament: all nine from the KDH, 11 other coalition MPs and six from the opposition.

HZDS member Peter Brňák gave the party's first speech against the proposed reforms, calling the amendments "too broad, unnecessarily vague, and generally not required" during his 90 minute address.

He objected to some of the main principles of the proposed draft - such as decentralizing the powers of the central government, and strengthening the checks and balances on executive power - the Supreme Control Office (a watchdog on state institutions), the Constitutional Court, and a new Ombudsman function (see chart, page 4).

"If this constitutional text is approved," he said, "the HZDS reserves the right to legally and legitimately and completely re-revise the Constitution in the future."

Katarína Závacká, a legal analyst with the Slovak Academy of Sciences' Institute of State and Law, said that the HZDS' opposition to the amendments was understandable, given the fact that the party itself had written the existing Constitution in 1992.

"Back in 1992, the HZDS didn't ask anyone - neither experts nor the citizens - for input on the creation of this country's first Constitution," said Závacká. "They didn't want democracy, they wanted centralism.

"This is clear when you look at their 1992 Constitution, which was a farce. It was just a combination of Constitutions from the first Czechoslovak state in the 1920s and the 1960 communist Constitution," Závacká continued. "The idea of centralised power was maintained, and so was the illiberal, communist tone of the document. This served the objectives of the HZDS well, and they are still in favour of a strong, centrally managed state - which is why they object to these amendments."

"The HZDS doesn't want to see the de-centralisation of state powers, and they oppose any change. No surprise there," Mesežnikov concurred.

"Perhaps had they proposed a completely new constitution, more people would have supported it," she added. "But under such a broad political coalition, I think they've done their best."