When Mario Maruška became one of the new owners of a central Slovak bar two years ago, he and his friends decorated the interior with some old communist memorabilia - a few flags, busts, posters and pictures. The idea caught on, and soon customers began bringing in more old communist relics to his Stupava Pub in Nová Baňa.
Today, the bar is covered in pictures and busts of Stalin and Lenin, billboards, original hammers and sickles - anything with a link to the bygone days of communism.
"People are still bringing us stuff," Maruška says. "Sometimes objects make it here from Bratislava. It's all in fun, and customers really like it. It's definitely improved our business." 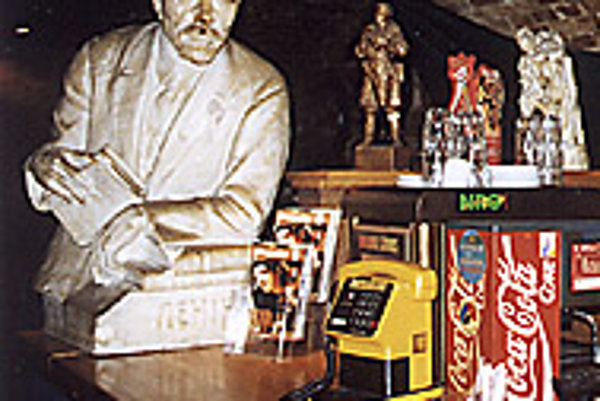 Font size:A-|A+0
When Mario Maruška became one of the new owners of a central Slovak bar two years ago, he and his friends decorated the interior with some old communist memorabilia - a few flags, busts, posters and pictures. The idea caught on, and soon customers began bringing in more old communist relics to his Stupava Pub in Nová Baňa.

Today, the bar is covered in pictures and busts of Stalin and Lenin, billboards, original hammers and sickles - anything with a link to the bygone days of communism.

"People are still bringing us stuff," Maruška says. "Sometimes objects make it here from Bratislava. It's all in fun, and customers really like it. It's definitely improved our business."

Stupova Pub is not the first bar in Slovakia to draw customers by poking fun at Slovakia's history. Since 1989, bars from Humenné (in northeast Slovakia) to Bratislava have used the recognition and availability (the items are usually free) of communist symbols to decorate their walls. But while the practice has become common, attempts to explain it reveal a complicated mix of views on Slovakia's communist past.

"When a group of Slovaks are good and drunk in a pub, what do they do?" asked Comenius Univeristy sociologist Ján Bunčák. "They sing old communist songs. People enjoy the familiar, whether Slovak or American. These symbols are not only ironic and humorous, they also carry with them pleasant associations and memories."

Albert Otruba, owner of Café Ante Portas (which has no communist memorabilia) in Bratislava, says that the practice is more than just a reference to the past - it's also a rebellion against it.

"Communist statues and busts were everywhere during communism," he said. "They were obligatory, they aroused a certain fear, and a person wasn't supposed to make fun of them. Now that that's no longer the case, there's a freedom - the idea of using them for decoration is funny."

Maybe so, but one sociologist says reasons for the phenomenon run deeper. Michal Vašečka, a sociologist with the Institute for Public Affairs (IVO) think tank in Bratislava, argued that former communist symbols would never have found their way into pubs had it not been for outside influences.

"The humorous use of these symbols in a commercial context came from the West, where the practice has been going on for many more years," he said. "I think it shows more about the desire of our young people to conform to the West than anything else."

Vašečka added, however, that the points raised by Bunčák and Otruba were also valid. "It's a complicated issue, and there are certainly a lot of factors at play."

Maruška says that his pub is frequented by both young and old clientele, and that he has never received any complaints about its decor. But for some who grew up under communism, the idea of using the symbols in fun is appalling.

"If I walked into a bar and saw symbols of communism, I would have the same reaction as if they were crosses," said Štefan Pauliny, director of the Confederation of Slovak Political Prisoners. "For a lot of people, communist symbols are symbols of suffering."

Pauliny says he was one of about 70,000 people sentenced to prison in Czechoslovakia for treason in 1954. Some 60 were executed for the same crime on Slovak soil, he added. "These symbols are not suitable for entertainment. They belong only to the museum of history."

IVO's Vašečka agreed. "I think people do not consider how terrible communism was. You wouldn't see a pub in the West with Nazi decorations and portraits of Hitler."

But in laughing at the communist symbols, in refusing to view them as horrible, some of Slovakia's youth argue that they are trying to make a break from their country's past.

"Obviously communism was awful and brutal, but it's not necessary always to take it so seriously," said 22-year old Juraj Vacho, sitting next to an enormous bust of Stalin in Bratislava's KGB pub, named after the infamous Soviet secret police - the komitet gasudarstvenoy bezopasnosti. "It's time for my generation to move on."

Comenius University's Bunčak said that such attitudes were not only natural, but also healthy. "Every generation forms its own conception of the past which is a mix of truth and stylisation. Laughter is part of that process."

The sociologist added that, for him, Slovakia's older generation had no reason to see these symbols as offensive when presented in the context of a pub. "For people who feel they were wronged by communism, these symbols point to a very satisfying fact - the communists were ultimately the losers."

Ironically, officials from today's Slovak Communist Party, which according to a February 2001 poll conducted by the Focus Agency has 4.5% voter support, say they are undaunted by the practice.

"If I walked into such a pub I would very politely say 'good afternoon' and sit down," said the General Secretary of the Slovak Communist Party, Ladislav Lača. "This will pass. People who are making fun of communism now won't be laughing in two or three years. The situation in this country is so bad that they are going to wish communism were back."

Future of the symbols

Although communist symbols have been exploited for commercial gain since only 1989, the objects themselves had long before been viewed as ridiculous by many Slovaks, Bunčák explained, because "they were everywhere. There were so many of them, it couldn't be anything but funny."

He recalled attending a conference where a famous American sociologist was to speak from a podium that had been covered with a cloth - an attempt to avoid a potentially embarrassing situation. "But right before he started speaking, someone who didn't know what was going on removed the cloth. There was a giant picture of Lenin... the whole room couldn't stop laughing."

Bunčák theorised that as Slovakia's communist past fell further into history, people would continue to see the communist symbols in a lighter manner, while the commercial use of the relics would probably increase as well.

But those working in the restaurant business say factors other than customer attitudes determine such fads. "Everyone wants to do something new and to be the first, so I don't think the use of communist symbols will become a big trend," said Juraj Silvan, director of KGB pub. "We have been open since 1995, and I know of only one other pub in Bratislava that has this type of image."

Café Ante Portas' Otruba added that the idea of decorating a restaurant with communist relics for irony's sake could only go so far. "I'm sure it will continue to exist in some places, but I don't think it will become very popular, especially not in establishments of a higher quality. "It's rather an easy joke."