Singer Ján Kuric's repertoire of unorthodox dance moves keep him in perpetual motion on stage. There's the hunched half-twist. The waddle and spin. The simian wiggle. The marching arm-flap. The opened-arm gyration...
"I learned how to dance from my aunt," Kuric told The Slovak Spectator last month. "A lovely, humble Slovak village woman."
On other occasions, Kuric has said that he learned his footwork stomping cabbage. 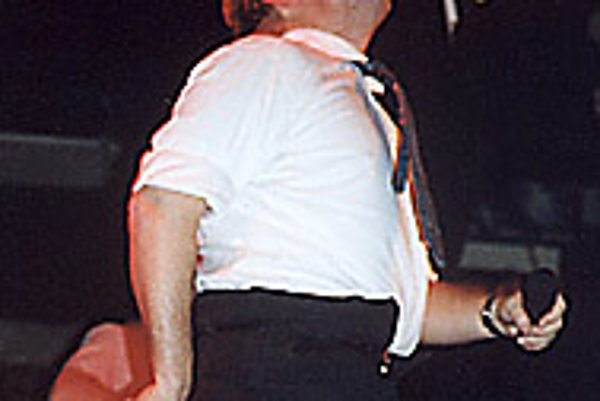 A Vidiek fan at a January concert

Singer Ján Kuric's repertoire of unorthodox dance moves keep him in perpetual motion on stage. There's the hunched half-twist. The waddle and spin. The simian wiggle. The marching arm-flap. The opened-arm gyration...

"I learned how to dance from my aunt," Kuric told The Slovak Spectator last month. "A lovely, humble Slovak village woman."

On other occasions, Kuric has said that he learned his footwork stomping cabbage.

"One thing you have to remember about me," he added, perhaps redundantly, "is that I don't take anything seriously."

Kuric is the front man of the Slovak band Vidiek, a progressive rock quintet whose catchy songs painting Slovak village life with irony and affection ('Vidiek' means 'countryside') found broad appeal in Slovakia in the late 1980s; Kuric's busy feet and sense of humour on stage has also made the band one of the country's most popular live acts.

"Vidiek is great because they express themselves in a simple way and Slovaks are simple people. We are a country of peasants, and they recognise that," said one fan after a sold-out Vidiek performance at a Bratislava club in January. "And Vidiek's live show has become a monumental event. They aren't musical geniuses, but they really know how to excite an audience."

During that January show Kuric, dressed in his customary shirt, tie and oversized trousers, sang and danced for over two hours without a break, energising the crowd with his stage antics and trading quips with them between songs.

After the first set's third song, a fan shouted, "encore". Kuric stiffened. "Okay, but only one more."

Vidiek formed in 1985 and found widespread popularity after the release of the LP Nechajte si ju (Keep Her) in 1988. On the album's title track, Kuric tells a father who won't give him his daughter's hand in marriage that he's going to the city to find a better bride. In Fačenie škodí zdraviu (Smoking is Bad for your Health), Kuric sings of a mother chastising a son for smoking. Such simple subjects and tongue-in-cheek lyrics marked a change for the Czechoslovak music scene in the years immediately before the Velvet Revolution in 1989.

"In the late 80s everything was so serious. It was all heavy metal and Depeche Mode. Then Vidiek came along taking nothing seriously," said Peter Balla, former DJ for the privately-owned Rádio Twist. "It was different and refreshing, insightful and humorous."

Vidiek comprises guitarist Richard Jajcay, the band's only schooled musician and a fan of Led Zeppelin, whose influence is heard in his guitar riffs; keyboardist Peter Dobrota, whose laid-back, jazzy playing adds colour to the band's rock style; bassist Kamil Grebeň and drummer Oňo Tomčala; and Kuric, who with his rich, Elvis Presley voice, singing in syllables as often as in words, brings an advanced sense of rhythm to Vidiek's sound.

The band says that they have never fitted into other people's categories because their music accommodates their varied approaches and tastes. "We have always been too underground for pop music fans, and too poppy for underground fans," says Kuric.

But in avoiding labels, Vidiek has found widespread appeal. Days after their club gig (with its young audience), Vidiek was a guest band at a variety show broadcast over Slovak radio (with an older audience). The crowd seemed delighted by the music, and even though no one got up to dance, Kuric was his usual, upbeat self on stage.

"At events like this we have to act a little more," he admitted. "But we really do enjoy ourselves, even when playing songs we've played 100 times before."

Part of the reason fans are always sure to hear the group's hits at every concert is that they haven't written many songs - since 1989 Vidiek has only recorded three albums, not including a live LP released at the end of 2000. Kuric says that a new album the group has been planning for several years may be out next year, but he can't be sure. "We're very lazy," he explains of the group's low output.

But that may in fact be one of the secrets of their staying power. By not pushing themselves to constantly tour and come up with new music, Kuric says, Vidiek continues to enjoy what they do, and to communicate this enjoyment in their music and concerts.

"If we played 100 shows a year it wouldn't be fun anymore. And if we were only concerned with music, we wouldn't have anything to inspire us," he said. "We actually have a manager to turn down offers."

Kuric goes so far as to say that Vidiek, which plays 10 -15 times a year in Bratislava and occasionally tours elsewhere on weekends, is an amateur group; the band's members all have jobs, wives, normal lives. But rather than being disappointed by the image of Kuric and company working nine to five, fans seem to appreciate that they haven't become rock stars.

"Vidiek is still one of Slovakia's most popular bands because they haven't changed. You really feel with their music that they aren't doing anything for money, or for the charts," said Balla.

A fan after the band's January show put it more emotionally: "Vidiek knows how to put on a great show and they know how to relate to normal Slovaks. They always were, are still, and always will be one of Slovakia's best and most original bands."

Vidiek's upcoming concert dates can be found on their website www.vidiek.miesto.sk. Their albums are available at music shops throughout Slovakia.