Culture Shock: Of beggars and breasts: what a shame

"What a shame," I said. I had just heard the life story of a pregnant crack addict. She had accosted me outside a bar in New York City, and after accepting an offer to feel her baby kick, I felt obliged to listen. Things were bad. She was alone and pregnant again. She was bored with life.
I told her she shouldn't smoke while pregnant, and gave hertwo dollars.
The next day I got on a plane, left America for the first time and came to Slovakia. The roads were narrow and the cars were tiny, and I couldn't understand what anyone was saying. But what struck me was how similar things seemed in the important matters - Nazareth's Love Hurts was the first song I heard on the radio. 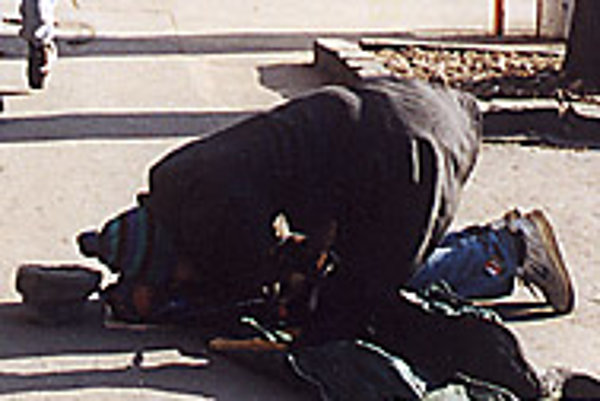 Font size:A-|A+0
"What a shame," I said. I had just heard the life story of a pregnant crack addict. She had accosted me outside a bar in New York City, and after accepting an offer to feel her baby kick, I felt obliged to listen. Things were bad. She was alone and pregnant again. She was bored with life.

I told her she shouldn't smoke while pregnant, and gave hertwo dollars.

The next day I got on a plane, left America for the first time and came to Slovakia. The roads were narrow and the cars were tiny, and I couldn't understand what anyone was saying. But what struck me was how similar things seemed in the important matters - Nazareth's Love Hurts was the first song I heard on the radio.

Then I saw my first Slovak beggar. He was kneeling in the cold rain with a sign around his neck and a small plastic container at his knees. He had a large head of shaggy hair and beard worthy of Robertson Davies. When passers-by gave him change, he would cry out as though he had been whipped, and shield his face with his hands.

In the space of less than 48 hours, I had been confronted by beggars representing two extremes: the cold, hollow face of shame, and the brash, imposing strut of shamelessness. The contrast told me that I had come to a deeply different culture. Beggars seemed the embodiment of those typical impressions most Slovaks and Americans have of one another: Slovaks as introverted and quiet, as if they were ashamed even by things they could not control, and Americans as self-confident and loud, as if they had no shame whatsoever.

A quiet emotion that runs deep, shame seems to define much of what separates Slovak and US culture.

I'm waiting in line at a bank in America when I see a friend. I yell a greeting and begin a conversation at high volume.

A Slovak on a Bratislava bus sees a friend. Rather than shout a greeting, she waits patiently for her friend to turn around, mouths a hello and inches towards her.

But it's perhaps in begging where these different approaches to social interaction, and one's place in society, are most clear. The American beggar waits under an awning and hustles unsuspecting strangers as they exit a pub. The Slovak beggar kneels in the rain whispering prayers and apologies. It's as if the American beggar, although he has fallen to the bottom of society, still lays claim to the American ethos of social equality, which says that any person has the right to speak to anyone else wherever and whenever he wants.

But shame, an agile sprite, cuts both ways, as I soon noticed regarding the physical immodesty of Slovak people compared to their US counterparts. I am speaking about the readiness of Slovak women to bare their breasts in public places, though my American upbringing scarcely allows me to be so direct without a blush.

I had seen breasts before in America, but rarely exposed in the open. I first saw them in Slovakia at Rusovce Lake near Bratislava. This wasn't so shocking - I had read about the European custom of bathing topless - but it brought back a memory: two Slovaks on vacation in America in an international group of skinny-dippers, casually undressing in the moonlight while the Americans hesitated, wondering if what was happening was sexual or just naughty.

In Slovakia, naked breasts remain - whether at the beach, in a book, or in a non-erotic movie scene - an unremarkable part of life. They may symbolise sexuality, beauty, femininity or motherhood, but rarely evoke shame.

This matter-of-factness can discomfit North American foreigners. Last Christmas, I gave a Slovak woman who has been like a mother to me a book containing photos of topless women. When the old lady who sold me the book (she looked like my grandmother) flipped through the pages to find the price, I blushed.

I felt uncomfortable then, but I have since learned not to. In this part of the world, one may watch early-evening TV (the Czech station Nova) and see a naked woman giving the weather report (tomorrow's weather roughly corresponds to the warmth of the outfit this naked nymph puts on). The first time I saw this, I wondered how many angry letters the station gets a week, and if they've been sued.

In the end, there is something deeply attractive about a country in which naked breasts are not objects of shame, while people reduced to begging through misfortune and bad choices are humbled by the experience. It's at least superior to America's shame dichotomy, in which the body is taboo and beggars hound strangers.

But both Slovakia and America seem to have changed since I left there and came here. In recent years, New York State's highest court made it legal for woman to go topless where men are allowed to go topless. Few women have taken advantage of this freedom yet, but it's a sign that American attitudes about the naked body may be shifting.

And in Slovakia, beggars may be turning their backs on mea maxima culpa and learning a western cockiness, if their behaviour is any indication. In the last two years, I've seen fewer people kneeling penitently with their hands cupped, and more lounging with laconic hands outstretched.

One beggar in particular has caught my eye. He sits under the archway at Michalská brána in Bratislava's Old Town. He has a cushion beneath his knees, his hands are extended into the walkway, and a vast joy seems to be simmering below the surface of his expression - you imagine that if you give him a crown, you'll see the ecstasy of a lottery winner. He is an actor extraordinaire, he gets money by invading your personal space with his eyes, and he shows no signs of shame.

I see this man at other times in front of Stará Tržnica drinking beer with his buddies. He is all loose elbows and easy grins. He seems so at ease with his life and decisions that sometimes I have the urge to approach him, because he reminds me of something - he reminds meof home.