Slovak Ambassador to the United States Martin Bútora was celebrating the second anniversary of his arrival in Washington at an investment conference in New York February 26. The Slovak Spectator caught up with him during a coffee break, and asked how recent domestic developments were perceived in his host country.
The Slovak Spectator (TSS): What was your reaction to the parliament's approval of the constitutional reform?.
Martin Bútora (MB): It was fantastic news for us, because it was proof that despite the most divisive of internal disputes, debates and problems, the government is able when push comes to shove to unite and take a decision that is important for the country... 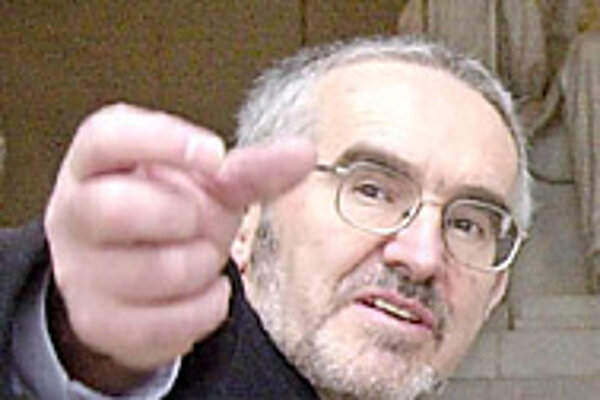 Font size:A-|A+0
Slovak Ambassador to the United States Martin Bútora was celebrating the second anniversary of his arrival in Washington at an investment conference in New York February 26. The Slovak Spectator caught up with him during a coffee break, and asked how recent domestic developments were perceived in his host country.

The Slovak Spectator (TSS): What was your reaction to the parliament's approval of the constitutional reform?.

Martin Bútora (MB): It was fantastic news for us, because it was proof that despite the most divisive of internal disputes, debates and problems, the government is able when push comes to shove to unite and take a decision that is important for the country. We saw a similar situation during voting on the direct presidential elections law [in 1999] and with the 2001 state budget. I'll tell you honestly, if they hadn't managed it, maybe it wouldn't have been a tragedy, but Slovakia would have had a much tougher time with key reforms at home, and it would have greatly complicated our work abroad. America is basically a country where everyone always asks, "What can you deliver, guys?" It's not enough to have good intentions - you have to show what you have done.

TSS: How important is the constitutional reform for Slovakia's NATO ambitions?

MB: It's crucial, all the more so for the fact that it has happened during the arrival of the new US administration. New positions are being filled with deputy secretaries, assistant secretaries, under secretaries, ministers, the National Security Council and so on. So it's key that just as we are creating and deepening our contacts with these people, this news arrives. It says a lot about our preparedness.

TSS: Is the coming reform of public administration awaited with the same anticipation as that of the Constitution?

MB: The voting on the constitutional reform was important because it needed a two-thirds majority [the government commanded only 91 out of 150 seats in parliament - ed. note]. It was exceptionally important that the Hungarian Coalition Party supported it as well. This was another signal of a certain political stability. You know, if you follow Americans in their politics, in their voting in Congress, their negotiations and political agreements and so on, they have a significant sense for realism, that you can't do everything all at once.

From this point of view the Constitution was vital, in that it lays the groundwork for public sector reform. People here believe that the different parties in Slovakia will be able to reach agreement. Since we are not about to become a political part of America in the way we are already part of Europe, it's understandable that Europeans are already taking up some very concrete questions with us. Americans don't tend to pay such close attention to details where they would express a strong opinion. They rather cross their fingers for us that we will be able to move away from centralism towards greater power for the people, towards greater potential on the self-government level.

TSS: How is the Dzurinda government's programme to fight corruption regarded?

MB: When this programme began [in February 2000], Americans understood that to a certain extent it was being prepared in cooperation with NGOs, and that it was connected with interesting aspects such as its presentation on the Internet, and property ownership statements from politicians. These aroused interest and attention. People will inevitable be interested in what the programme eventually achieves, what the difficulties are and so on. But for now, we don't have these results, and we can only speak about what we expect.

But we cannot escape the fact that Slovakia will be examined very closely in this area as well in its integration ambitions, just as other [NATO] members are. Again, no one is expecting that a country which endured decades of corruption under Communism and then Mečiar-era corruption will be able to solve things tomorrow or the day after. It's more a question of taking certain decisions, making certain efforts and documenting our progress.

Here it has been quite important that three ministers have resigned because of pressure from the public and media. There was no proof brought forward [of their guilt], but neither were they able to refute allegations, and the atmosphere in society prevented them from continuing in their positions. This was not a matter of the government but of the entire society, which no longer accepts such behaviour. With Slovak society gradually moving towards rejecting certain forms of behaviour, this helps us a great deal.

TSS: Did former Defence Minister Pavol Kanis' decision to resign [in December 2000] help us in the same way in our NATO ambitions?

MB: The news of Kanis' resignation had an immediate impact here... I don't really know all the aspects of this case, but I think it accentuated a different aspect [of integration] dealing with our capacity in this area. The capacities which exist have to be developed far more intensively, including army reform, a realistic grasp of what Slovakia will be able to fulfill of the 64 goals it accepted under the Membership Action Plan, and what it will be able to offer the alliance. These changes are seen above all in the context of making sure the right people are in the right places, that the role of the civil sector in the Defence Ministry is strengthened, that the person in the ministerial seat be aggressive, that he or she not be allied to any external network, and that they have the ability to push these reforms forward energetically.

MB: Again, it's more that while everyone has been in favour of NATO entry [since 1998 elections], the question has to be asked, where are the results? This means that we really needed some new energy in the ministry, and from this perspective, the arrival of people like Stank and Káčer is a big step forward.

TSS: Isn't this another paper development? That there are still no results, but we now have a more friendly leadership?

MB: I wouldn't say it was only on paper, because I am in close contact with Káčer, and I can see that things are really in motion. In international relations, besides doing its homework a country really has to work on its image. When [Deputy Prime Minister] Ivan Mikloš made his speech today, you saw this difference in dynamics. The reaction was tremendous - in my interviews with people at this conference, it is clear that Slovakia is seen as a country that is obviously going somewhere, that it is dynamic, and that this government has drive and wants to move ahead. It's a story, the story of our country, which has to rest on some truth, which has to be worked on, and which we have to know how to sell and put into effect.

TSS: You have mentioned Mikloš, but you haven't talked about the entire government, that would be too rosy...

MB: (Laughs) Part of telling this story involves talking about matters where you can point to good representatives. It doesn't mean lying, just talking about things where there is something worth praising.

TSS: Káčer said that he regarded the Prague NATO summit next year as the time that we could expect an invitation to join. Is that your understanding too?

MB: Yes. I think that Bulgarian Foreign Affairs Minister Nadežda Mihailová was right when she said the Prague summit was expected to be a 'rendezvous with history'. There is a good chance that something important will happen there.

But everything is far from ripe. The theme of NATO expansion for a long time has been rather dormant. Then came a period when Europe was waiting to see what the US side would say, and I think things are beginning to move - we are beginning to see a debate here as well over what America's position will be on further expansion. That's why the choice of Prague as a summit site is significant - for one thing because the Czech Republic is a new member, and for another that for Slovakia, the Czech Republic is not just any new member state.

TSS: It was seen that the US position on Slovakia's OECD membership became much warmer once U.S. Steel signed the contract to buy [Slovak steel firm] VSŽ [last summer]. Can we expect that Slovakia's NATO membership bid will be aided by similar big business deals involving US firms, and that investment conferences like this one can in some ways be seen as supporting foreign policy goals?

MB: Of course. Of course, absolutely. It's natural. When they [investments] are there, they form a pragmatic basis [for relations]. In America, friendship is born on pragmatic foundations - that's the American way. The U.S. Steel deal was front page news even before the contract was signed, and we weren't 100% sure that it would be [signed], but we published the news anyway and hoped for the best [in relations with the US], and it all worked out.