A February 19 report by the UNDP (United Nations Development Programme) has said that nearly 11% of Slovakia's 5 million citizens live in poverty. It also warns that despite the fact that the Bratislava region matches standards of living in other EU states, poorer regions in the country have living levels on a par with third-world states in Africa.
After the report's release, sociologists and UNDP representatives said that poverty, which under communism had been virtually non-existent, had become a major concern over the last five years, and called for more recognition of the problem by current policymakers in government.
According to Juliette Hage, human development advisor at the UNDP, the number of individuals living in what she said was "material distress", or poverty, had grown over the last five years. 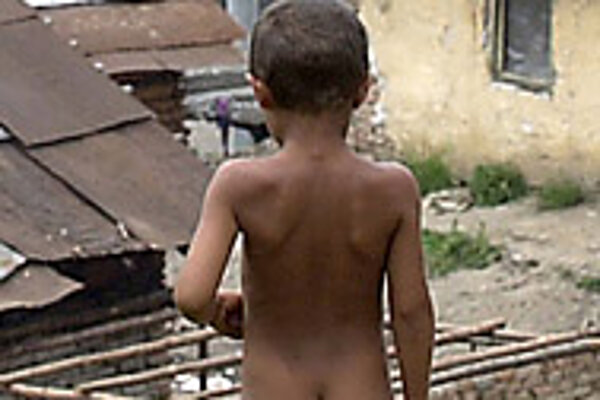 Font size:A-|A+  Comments disabled
A February 19 report by the UNDP (United Nations Development Programme) has said that nearly 11% of Slovakia's 5 million citizens live in poverty. It also warns that despite the fact that the Bratislava region matches standards of living in other EU states, poorer regions in the country have living levels on a par with third-world states in Africa.

After the report's release, sociologists and UNDP representatives said that poverty, which under communism had been virtually non-existent, had become a major concern over the last five years, and called for more recognition of the problem by current policymakers in government.

According to Juliette Hage, human development advisor at the UNDP, the number of individuals living in what she said was "material distress", or poverty, had grown over the last five years.

"The situation in Slovakia in terms of poverty has worsened, and barriers between rich and poor have grown too. It is of considerable importance for the government to pay attention to this issue and try to solve it, because if there aren't any investments made in human beings, economic prospects are threatened," she said.

The number of individuals in "material distress" [as with poverty, defined as those individuals with limited earning power because they are unable to establish themselves in society by getting a proper education and job] grew between 1995 and 1999 from 7.6% to 10.8% of the total population, the UNDP says. The report also highlighted the fact that this poverty was seen most in the long-term unemployed, and particularly the estimated 500,000 strong Roma community.

Last month, the country's National Labour Office reported an unemployment rate of 20.81%, the highest in the history of Slovakia.

"Poverty in Slovakia is far from the poverty in African countries, where people don't have anything to eat, are unlettered and where hygiene is at a very low level. Here it is connected with a lack of jobs on the labour market and poor education," said Luboš Vagač, a sociologist and one of the authors of the UNDP report. "The issue has been knocking on [Slovakia's] door, and it has to be dealt with," he added.

The government itself has put the minimum amount of money each citizen needs to survice (the 'subsistence level') at 3,490 Slovak crowns ($73) per month. The UNDP says that basic subsistence covers needs for food, clothes, transport and living.

According to the report, the 11% of people who are below the poverty line includes any individual and his or her children whose monthly income doesn't reach this level. The group includes long-term unemployed, old people, and single-parent families as well as large families (those with three or more children).

"When we look at welfare payments, real wages, pensions, and other payments, the purchasing power of all of these is either the same or below what they were before 1989. We are trying to change the current state of affairs, but the change will obviously only come with an improvement in [overall] economic performance, and it will take some time to see the link between a better economic performance and fewer people living in poverty," said Boris Sopira, general secretary at the Labour Ministry.

Although similar UNDP reports for other countries of central Europe, including Poland, Hungary and the Czech Republic, show that the difference between the poverty figures for these states and those of Slovakia is relatively minor, the Slovak report indicates a more serious disparity within the country's regions.

According to the report, the poorest Slovak region is Prešov, in eastern Slovakia, with GDP per capita in terms of purchasing power - the category most used to measure living standards - at $5,100. The figure is similar to that for the African state of Botswana (see chart below). However, Bratislava, with GDP per capita of $17,500, outstrips the average for Spain, and is slightly above the same category for New Zealand.

The European Union Statistics Office's own figures show that in the period of 1995 to 1997, Bratislava's per capita GDP in terms of purchasing power was 111% of the European Union average, while the figure in other Slovak regions was slightly over 40%. Experts say that in the last three and a half years the situation has not changed.

The UNDP's Hage suggested that the answer to the problem of regional differences may lie in foreign investment. She explained that 67% of the Slovak population lived in less developed districts, including the Nitra, Žilina, Košice, Prešov and Banská Bystrica regions, while only 11.5% of the population lived in the most developed region: Bratislava.

"Slovakia is working hard to improve its image by attracting more foreign direct investment, which is going to be a solution for regional differences. But foreign investors come to see Bratislava and usually stay there. They don't go to the countryside, because there is not so much infrastructure and people are less adaptable," Hage said.

"It is important for the government to invest more money into education, so people in the regions become more adaptable to the needs of foreign companies." Total expenditures on education decreased from 5.1% of GDP in 1995 to approximately 4.5% in 1999, the UNDP report says.

However, the Labour Ministy's Sopira said that although last year Slovakia registered its highest-ever annual total of foreign direct investment - $1.5 billion - it takes two years from the time a foreign investor makes a 'brownfield investment' (eg. buying into a company) for the social benefits to the region in terms of jobs created really to be felt. 'Greenfield investments' (setting up new firms), he said, had a much more immediate effect.

"Most of the investments that Slovakia reported last year were brownfield, not greenfield, and it's the latter which generates a lot of new jobs. That's why there hasn't been any increase in the number of jobs from these brownfield investments. It takes time for foreign [brownfield] investors to invest into expanding their facilities and consequently to hire more people," Sopira said.

Economic analysts have agreed, saying that greenfield investments are key to lowering regional differences in living standards. "It is an important task for the government to get one foreign investor into each [economically] stagnant region, because this single investor will attract other investors, and that's what these areas need," said Ján Tóth, an analyst with ING Bank.

Citing the examples of recent investments in the poorer regions of the country, such as American textile firm Molex, which has invested into the Košice district, the Japanese firm Matsushita in the Spišský district, Whirlpool in Poprad and Volkswagen in the central Slovak district of Martin, he said: "These kinds of investors have to be given extra incentives in order to get them there. In these cases, positive economic discrimination [in the form of tax holidays and subsidies for retraining workers] definitely makes sense."