When Marta Žuchová goes to work she is faced with scores of prattling children.
Sometimes the very thought can be exhausting, but the 59 year-old says that one reason she chose her profession was because she wanted to be around kids.
Žuchová is not a principle or a paediatrician. She is a puppeteer. She makes a living by touching life into figures of cloth, wood, and plastic, by filling their mouths with lines from fairy-tales and comebacks to heckling crowds. It is a craft with a deep tradition in Slovakia, and one that takes more years to learn than most of her audience have been alive. 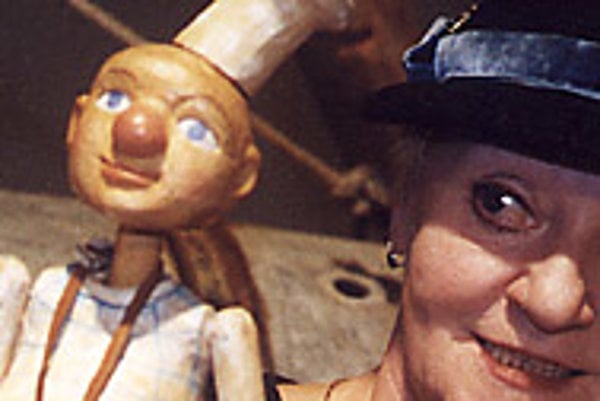 Font size:A-|A+1
When Marta Žuchová goes to work she is faced with scores of prattling children.

Sometimes the very thought can be exhausting, but the 59 year-old says that one reason she chose her profession was because she wanted to be around kids.

Žuchová is not a principle or a paediatrician. She is a puppeteer. She makes a living by touching life into figures of cloth, wood, and plastic, by filling their mouths with lines from fairy-tales and comebacks to heckling crowds. It is a craft with a deep tradition in Slovakia, and one that takes more years to learn than most of her audience have been alive.

The aspiring Slovak puppeteer must master over six basic types of puppets, including maoušky (hand-held puppets), javajka (large Russian puppets operated with long sticks) and classical marionettes (string-operated puppets). Some of these puppets are as tall as three people, and no two move exactly the same.

"Marionettes are the most difficult," says Žuchová. "You spend your whole life learning how to control them."

Žuchová studied pupeteering at the Prague school of Performing Arts in the early 1960s, a time when small-stage marionette plays were evolving into full-stage productions that blurred the lines between puppet and traditional theatre. Today puppeteers spend almost as much time on stage singing, dancing and acting as they do operating puppets.

"They have to be able to do everything an actor at a regular theatre can do," said Ján Brtiš, director of the Slovak state puppet theatre Bratislava, where Žuchová works. "But it isn't like music or theatre in the sense that a gifted person can walk off the street and become a star - puppeteering requires years of training."

Brtiš's theatre group, founded in 1954, employs 12 puppeteers and performs weekly once on weekdays and twice on Sundays. Its two annual premieres draw from Slovak fairy-tales or classic myths, which have included in recent years the Magic Flute and a version of Giovanni's opera Love Potion. Puppets are made by three in-house puppet artists. Nitra, Košice, Banská Bystrica and Žilina also have state puppet theatres.

Black theatre, a Czechoslovak innovation, is particularly well-known internationally. Puppeteers dressed and painted in black stand in the pitch dark behind a thin field of light. When they move their puppets in this field, the puppets appear to be moving by themselves.

"In my opinion puppet theatre is a much richer art form than classical theatre. There is a wider range of materials and mediums of expression to choose from," said Petronela Dušová, who in 1994 co-founded the Theatre Nelina, one of at least 10 independent puppet theatres in Slovakia. Nelina theatre regularly performs at international festivals and plays with the Slovak Philharmonic once a year.

Itinerant Germans and Italians brought pupeteering centuries ago to what is now the Czech Republic. The art form spread to Slovakia in the 20th century. Well supported by the post World War II communist regime, Czechoslovak puppeteers became known, along with Russian and Polish, as global leaders of the art form.

"The communists were proud of puppet theatre and liked showing us off," says Žuchová. "I performed in Iraq, Cuba, China, Vietnam, Japan, Mongolia..."

The department of puppet theatre at the Bratislava School of Performing arts was opened months before the Velvet Revolution in 1989 to allow Slovaks to study the puppeteering without having to go to Prague. Today the school employs 14, and teaches around 30 students.

"We have to turn students away because with only five professional puppet theatres in the country, producing more graduates would be useless," said Žuchová, who also teaches at the school.

Assured of a steady supply of students, and in demand internationally, domestic funding has been the biggest problem for Slovakia's five state-run puppet theatres, which have seen their budgets frozen since 1995 even though inflation has not let up.

"We used to have four premieres a year - three for small children, one for youth and adults, but now we have only two premieres - both for children," said Brtiš.

But young audiences have long been a fact of life for puppeteers, who say that that is the reason they have never been as respected at home as performers in theatre or film. "We are more appreciated abroad. In Mexico, I was a superstar," said Dušová. "Slovaks have the attitude that puppet theatre is not serious because it is for children. When I studied in Prague in the 80s they called us 'little actors', even though we had to learn more things than the 'big' theatre acts."

But Dušová says that children actually make a more dynamic and challenging audience than adults. "Children are sincere and spontaneous. They will yell and play along. And if they don't like what you are doing, they will turn their backs and watch something else."