Recent allegations of police brutality and hate-crimes committed against Slovak Roma in the Prešov and Košice regions have been not only denied by police, but also interpreted as an attempt by some Roma to generate sufficient hysteria among the minority to fuel another wave of migration to western countries. The police reaction has highlighted the gulf in how the Roma and law enforcement officers perceive each other, a gulf which analysts say is preventing solution of the minority's serious problems.
In the latest apparent incident of racial violence, a 38 year-old Roma woman from Košice, named Eva Csiszárová, alleged March 20 that a group of around 15 skinheads had beaten her and her 10 year-old daughter Ivana, doused her in gasoline and tried to set her aflame. According to the daily paper Sme, the skinheads departed after failing to find matches; the two victims then fled to their home in the Luník IX Roma ghetto. 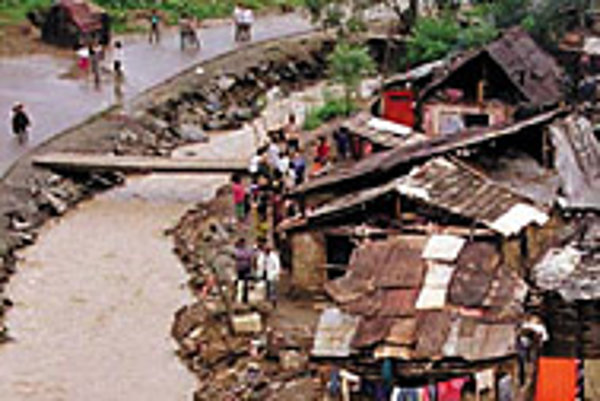 Font size:A-|A+0
Recent allegations of police brutality and hate-crimes committed against Slovak Roma in the Prešov and Košice regions have been not only denied by police, but also interpreted as an attempt by some Roma to generate sufficient hysteria among the minority to fuel another wave of migration to western countries. The police reaction has highlighted the gulf in how the Roma and law enforcement officers perceive each other, a gulf which analysts say is preventing solution of the minority's serious problems.

In the latest apparent incident of racial violence, a 38 year-old Roma woman from Košice, named Eva Csiszárová, alleged March 20 that a group of around 15 skinheads had beaten her and her 10 year-old daughter Ivana, doused her in gasoline and tried to set her aflame. According to the daily paper Sme, the skinheads departed after failing to find matches; the two victims then fled to their home in the Luník IX Roma ghetto.

The Roma mother said she had lost consciousness during the attack. "I remember only that they came towards me, one poured gas on my legs and shouted 'Die, Gypsy bitch'. Then the others started kicking me. I could hear my daughter shouting 'Mama!'. Then I don't remember anything."

After recovering her wits, Csiszárová was taken to hospital, where doctors treated her for multiple facial and back wounds and discharged her. Police laid charges against unknown assailants on March 20 after reading of the incident in a local Košice paper.

But Ľubomír Kopčo, head of a Košice district police department, said that he did not believe the beating had taken place as reported. Kopčo noted that the police had not been able to find any evidence of gasoline on the clothing of the victims, nor had they noticed more than one bruise on the mother.

"In my opinion, she made it up," he told The Slovak Spectator March 22. "I don't know why she would do it, but the Roma are probably preparing the groundwork to leave [the country and apply for asylum in the West].

"Unfortunately, attacks happen in this country," he added. "But the Košice Roma think that everyone whose hair is shorter than five centimetres is a skinhead."

The Košice incident, for the Roma, is part of a general pattern of violence aimed by the Slovak majority at the darker-skinned Roma minority. Three weeks before the beating, the Legal Protection of Roma Office in Košice had initiated a petition signed by 95 of 98 adult Roma in the eastern Slovak village of Hermanovce, charging local police with brutality. The petition has been sent to the Interior Ministry, the European Commission and other international organisations.

The petition, and the recent beating, have left the Roma and the police as far apart as ever. Roma leaders say that the minority faces constant discrimination and violence in Slovakia, and that their complaints are rarely investigated. The police, meanwhile, argue that almost every allegation of police brutality against the Roma has been discovered to be unfounded.

The Košice Roma Office on March 1 accused local police of conducting several heavy-handed raids in January in the village of Hermanovce, which falls under the police jurisdiction of the Jarovnice district near Prešov. In the report, the Roma charged the local police with having committed several lewd and wanton acts.

The report, which describes an early morning police investigation of Frederik Kaleja, a Roma suspected of theft, reads: "Police from the local station in Jarovnice arrived early in the morning January 12, and without any explanation or warrant violently broke into the house of the Kaleja family."

According to video-taped testimony of the Kaleja family, police then sprayed tear gas into the eyes of Frederik Kaleja, struck him several times with batons, shouted racial epithets at him and his family, then took him to the police station for questioning. Kaleja said he had asked the officers if he could get dressed first "because it was minus 20 degrees Celsius", but that the police had refused.

At the police station, Kaleja said he was intimidated into admitting to a theft he had not committed, and was forced to testify that his brother, Valent Kaleja, had also been involved in the crime. He also alleged that one of the young police officers sexually harassed him and forced Kaleja to "perform oral sex" on him.

The Košice Roma Office released a video recording of Kaleja saying he was ordered to touch the officer's penis under threat of physical violence. Kaleja said that after performing the act, he vomited and was beaten again.

"At first we were just shocked that police investigations could be so brutal and tough," said Košice Office head Edmund Muller. "We have decided to file a complaint because this is not human, this should not be allowed."

The Office said that the police "broke into" several more Roma dwellings in Hermanovce after the original incident, accusing the Roma inhabitants of various thefts.

Representatives of the Jarovnice police department would not comment on the reports. Jozef Čontoš, head of the District Police Headquarters in Prešov, also declined to comment directly on the allegations.

"I don't know anything about the complaint," he said March 19. "But I do know that the Prešov Regional Police are taking some measures against the gypsies."

Fečová added that Prešov police had investigated the allegations in cooperation with Jarovnice police officers, but "only for our internal purposes."

Čontoš said that complaints against police officers were not rare, but that most proved to have been fabricated. "Since I took my post a few years ago, we have never had a complaint from the Roma based on truth," he said.

Meanwhile, the Interior Ministry's Police Inspection office has begun an investigation of the January events in Hermanovce. "We'll have to hear from all parties involved, including the Roma settlement inhabitants who witnessed the events," said Ladislav Barkol, head of the Department of Complaints at the Inspection office. "The process will take us about two months."

He, too, added that in his experience, investigations of Roma complaints usually proved the allegations unfounded.

"We don't register whether the complaining party is a Roma or any other minority," he said. "That would be discrimination. However, of the 3,917 complaints against the police in 2000, only 18.7% - that is, 522 complaints - were founded on valid points." In 2000, he added, not a single Slovak police officer had been convicted of racism or police brutality against Roma suspects.

Nothing to be proud of

The Roma, on the other hand, say that the police should not congratulate themselves on not having had one of their members charged with race violence. Miloslav Kováč, a Roma activist from the Roma NGO Roma Gemer, said that Slovak police were never prosecuted for crimes against the Roma because investigations were often swept aside. "The Roma feel helpless because their complaints are often forgotten in the drawers of a police investigator's desk," he said "They complain, but nothing ever happens to the police officers."

He said that unexpected and violent police raids were not uncommon for Roma in many villages and towns. "But if they complain, the usual result is that the issue remains unanswered."

The Interior Ministry's Barkol disagreed. "I protest against such allegations," he said. "We take all complaints very seriously. But citizens have to realise that they not only have rights in a democracy but also duties. I'm not saying there aren't policemen who sometimes might have incorrect attitudes on how their jobs should be done, but they are very few and far between, and people shouldn't generalise about Slovak policemen in that way."

As for police allegations that the Roma are faking beatings to justify another wave of migration, minority experts say that if another Roma exodus occurs (see related article, this page), it will be caused by the real discrimination the Roma face, not spurious allegations of police brutality.

"There is concern that another exodus will happen," said Michal Vašečka, a sociologist and Roma analyst at the IVO think-tank in Bratislava. "There very well may be an exodus to the liberal Scandinavian countries, such as Norway. The Roma are unsure of their safety in this country, and these cases could definitely influence them to leave."