The eastern Slovak town of Medzilaborce has had water supplies to its hospital cut off. Trnava hospital phones have been disconnected, and its bank accounts have been blocked. Doctors in Ilava hospital, in central Slovakia, meet every month to decide whether they can perform theatre operations or not. Hospitals in the Spiš and Košice regions have been inundated with letters from utilities demanding they pay bills or suffer property to be seized.
"The situation is critical. Insurance companies and utilities send us letters demanding payment. We only hope they won't cut off supplies and phones. The worst thing is that it is the patient that is on the receiving end of all this, and not through any fault of ours," said Marián Glova, deputy financial director of Košice's L. Pasteur hospital. 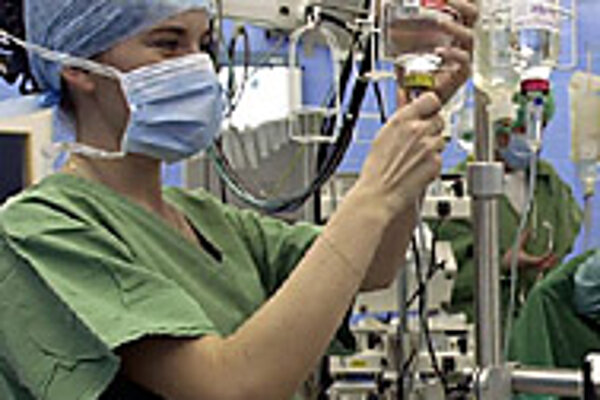 Font size:A-|A+  Comments disabled
The eastern Slovak town of Medzilaborce has had water supplies to its hospital cut off. Trnava hospital phones have been disconnected, and its bank accounts have been blocked. Doctors in Ilava hospital, in central Slovakia, meet every month to decide whether they can perform theatre operations or not. Hospitals in the Spiš and Košice regions have been inundated with letters from utilities demanding they pay bills or suffer property to be seized.

"The situation is critical. Insurance companies and utilities send us letters demanding payment. We only hope they won't cut off supplies and phones. The worst thing is that it is the patient that is on the receiving end of all this, and not through any fault of ours," said Marián Glova, deputy financial director of Košice's L. Pasteur hospital.

State hospitals all over Slovakia are battling the same crippling financial disease: debt. Their dues, excluding penalties for non-payment, have climbed to 10.5 billion Slovak crowns ($210 million) in total over the last decade, as state management of the sector has left a chain of debt involving insurance firms, hospitals, pharmacies, state-owned utilities, and the state itself. Health care experts say the system is on the brink of collapse, and that if the situation is not resolved, patients' health will be endangered.

"The health system, which is nothing more than Communist, has lost its ability to provide effective health care," says Rudolf Zajac, a doctor and advisor to Deputy Prime Minister for the Economy Ivan Mikloš.

The hospital cash crisis has had some startling effects. In early March, a human leg was discovered on a river bank in Trnava; it had come from the Trnava hospital, whose incinerator had been shut down by the Environment Ministry. Other hospitals had refused to allow the Trnava hospital to use their incinerators because they had been worried they would not be paid. The Slovak Spectator was unable to reach Trnava hospital staff for comment, as the facility's phones had been disconnected.

But staff at other hospitals were eager to comment on the financial crisis. Norbert Kučerka, an intern at a hospital in central Slovakia's Veľký Krtíš, said that lack of money affected his work in two main ways: medical equipment was old and in poor repair, while the drugs needed to treat patients were often simply not available. "We frequently have to explain the situation to patients, and find ourselves prescribing drugs that are cheap rather than those that are effective," he said. "We also have to ask patients to go and buy the necessary drugs themselves. The machines we have are ancient and frequently break down. We can neither repair them nor afford modern technology. My boss is looking for any way out of this he can, mostly by searching for sponsors."

Kučerka added that his hospital had had to reduce beds and staff to avoid shutting its doors altogether. As a result, he said, criteria for admitting patients for treatment, as well as for elective surgery, had been tightened. Patients were also frequently discharged before they had completely recovered.

So far, hospital patients seem to have been spared the worst effects of the crisis. Jozef P., a 74 year-old former factory worker who preferred not to give his full name, underwent a gall bladder operation at a hospital in western Slovakia's Považská Bystrica in December 2000. "The doctors were very good, as they always are, but I did notice I had to bring everything I needed with me - towels, pyjamas, soap. It's certainly not like it used to be, when you could count on the hospital supplying the basics."

But many doctors fear some kind of crash in medical services is approaching, and have pleaded with power and water utilities not to disconnect vital supplies. For the moment, the creditors have said, they will not take such drastic measures.

"We know that it would be inhuman to do so, and we haven't done it yet. But we ourselves are sinking in debts," said Božena Scepánková, head of finances at water utility Zapadoslovenské vodárne a kanalizácie.

Helena Poláková, spokeswoman for the SPP state gas utility, reported that hospitals collectively owed the utility 710 million crowns ($14.79 million). "However, we are not considering seizing any hospital property. We take a special and more gentle approach to them because they are, after all, hospitals."

A vicious chain of debt

The critical indebtedness of health clinics has been caused, doctors say, by the state's poor management of the health sector.

Currently, the state budget allocates a set amount for health care, money that is passed on to five state insurance companies. Those insurance companies then pay this money to hospitals and pharmacies, regardless of the fact that actual operating costs reported by hospitals exceed what they receive by as much as 600 million crowns ($12.5 million) a month. The shortfall in funding creates added debt to utility firms and other suppliers.

However, even the state money that is earmarked for hospitals does not always reach them. Insurance companies claim that delays in payments from the state in turn delay their payments to hospitals and pharmacies. Hospitals are subsequently left in even deeper trouble covering their debts to suppliers of medical goods and utilities.

For starters, hospitals would like to see state funds paid directly to them rather than through the insurance company funnel, which they say in effect puts funding decisions in the hands of these firms rather than the Health Ministry, and does not encourage efficient management of resources.

"Funding should come straight from the state, not through health insurance companies," said Košice hospital's Glova. "Then it would be obvious who is a good [health care] manager and who is not."

Hospitals also say that by allowing so many layers of funding bureaucracy, the ministry is actually frittering away the scant funds that exist.

"The Heath Ministry sings the same old song - 'we need more resources' - again and again. But the more they receive [from the state budget], the more they consume," says Zajac.

Health insurance companies have weighed in with their own criticism of the sector. Zuzana Rýchliková, a manager at the largest health insurer, Všeobecná Zdravotná Poisťovňa, said that when any insurance company struggled, the other four, through an obligatory profit-sharing scheme, were forced to prop up the inefficient firm financially. "The system that we have is not health insurance in its true sense", she said. Zajac added that it would be far more efficient to have one large insurance firm administering what was, after all, public money.

But the hospital debt problem is not confined to a demotivating system and inefficient allocation of resources - it also derives from frank non-payment of insurance dues, much of it by state firms. Legislation introduced in 1995 obliged all organisations fully or partially funded by the state, such as schools, museums etc., to pay an additional 38% of their total salary costs in employee health insurance dues. Whereas the state had previously paid these health insurance costs, Zajac said that after 1995 these under-funded organisations were unable to meet the new payments, leading to more sector debt.

Mária Husárová, head of the Health Ministry's economic department, admitted that the debt had been exacerbated by the fact that for the last five years the state had not fully covered its insurance payments for retired people, soldiers, the unemployed or children.

She noted, however, that the government was working on a plan, which although not a panacea for the sector, would at least treat some of the symptoms. "The Finance Ministry has formed a team that has compiled a thick file of laws and duties for reducing the debt. However, the programme has not been implemented in practice," she said, adding that she was unaware of the specifics of the scheme.

For Zajac, successful sector reform begins with wiping out the debts, if necessary from public funds. "Erasing the debt is a necessary precondition for successful transformation of the whole sector," he says. "But at the moment, no one even really knows how large the debt is."