Alcohol and tobacco advertising law: profit at what cost?

When Health Minister Roman Kováč announced at a March 19 press conference that the consumption of alcohol per person in Slovakia had dropped 2.5 litres - from 10.4 litres in 1990 to 7.9 in 1999 - he explained that the country's thirst for drink had likely subsided as a result of a Slovak law which restricts alcohol advertisements. In the Czech Republic, he said, that law did not exist; hence the Czech consumption increase over the 1990's from 9 to 9.9 litres per person.
But the law Kováč credited for reining in Slovak drinkers may now be thrown out in favour of a new law liberalising the alcohol and tobacco advertising market. Supporters - saying it will put more money into the Slovak economy - welcome it; those fearing a resulting increase in the country's number of addicts oppose it. 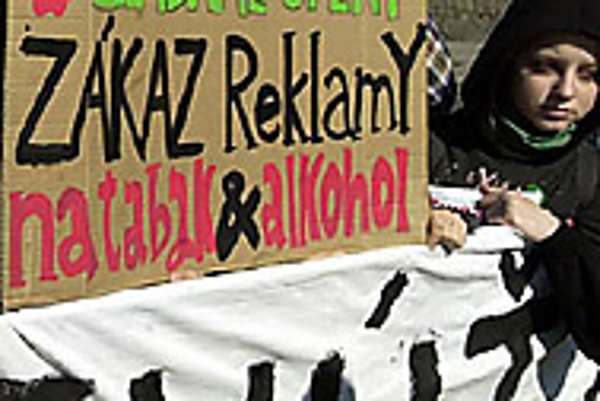 Font size:A-|A+0
When Health Minister Roman Kováč announced at a March 19 press conference that the consumption of alcohol per person in Slovakia had dropped 2.5 litres - from 10.4 litres in 1990 to 7.9 in 1999 - he explained that the country's thirst for drink had likely subsided as a result of a Slovak law which restricts alcohol advertisements. In the Czech Republic, he said, that law did not exist; hence the Czech consumption increase over the 1990's from 9 to 9.9 litres per person.

But the law Kováč credited for reining in Slovak drinkers may now be thrown out in favour of a new law liberalising the alcohol and tobacco advertising market. Supporters - saying it will put more money into the Slovak economy - welcome it; those fearing a resulting increase in the country's number of addicts oppose it.

"Tobacco and alcohol are already causing a great deal of damage to the Slovak population," said Jozef Prillinger, vice-president of the Bratislava-based Union of Slovak Abstainers. "This law will negatively influence the country, especially the younger generation. We already have too many people dependent on alcohol and cigarettes. I don't think we need any more."

But Economy Ministry spokesman Peter Benčúrik said that his ministry, which proposed the law change, had written the proposal "in consultation with alcohol producers, NGOs and health care organisations, who agreed that this proposal was acceptable".

"We had two sides to consider when preparing the law: those in favour of total prohibition, and those who wanted to liberalise the market," Benčúrik said. "We decided on a compromise."

After haggling over the law for more than two hours on March 28, deputies agreed to hold a final vote the following week (The Slovak Spectator went to print March 29). To be ratified, the proposal requires a simple majority of MPs present in the chamber. Benčúrik said that he hoped the law would go into effect by June 1.

During his press conference, Minister Kováč reported that his ministry's latest findings on alcohol research showed that 5% of the Slovak population is abstinent, 5% are alcoholic, 60% are "non-problematic consumers of alcohol", while 30% are hazardous drinkers who may become alcoholics.

But Ludvík Nábělek, the head of the Psychiatric Department at central Slovakia's Banská Bystrica hospital, said the numbers are far more grim than the minister says.

"There are 15,000 registered alcoholics in Slovakia, but if you want the real number in this country, multiply by five," he said, noting that he often treats 15 year-old alcoholics. "There are between 700,000 and 800,000 people with some kind of alcohol problem in Slovakia."

"There is a very accepting approach to alcohol in Slovakia," he continued. "We have families in which literally everybody drinks. That's why it's very difficult - mainly for young people - not to drink. They feel like outsiders when they abstain."

Were the proposed law to be passed, some fear that tolerance for alcohol consumption and the number of Slovak addicts would increase further.

"I hold the same standpoint as the health sector," said Alojz Rakús of the Christian Democrats Party (KDH) to the Sme daily paper March 20. "We [the KDH] did not support this law. Slovakia has one of the highest consumption levels of alcohol and cigarettes in the world today."

Richard Morgan, the general manager of Philip Morris tobacco firm in Slovakia, also expressed concern over the new law, saying that it would remove many important restrictions now in place.

"We're not satisfied with the proposed law," Morgan said. "It would considerably liberalise the market and remove some restrictions which should not be removed. For example, we don't believe that the new law restricts youth smoking enough. It just takes away some sensible restrictions we feel should be maintained."

But supporters of the law refute the equation that increased advertising equals higher addiction rates. Furthermore, they add, by failing to liberalise the market sooner, Slovak policy makers have cost Slovak business billions of Slovak crowns in advertising revenues.

"Of course, it is necessary to defend against the negative effects of alcohol and cigarettes," said Movement for a Democratic Slovakia (HZDS) member Dušan Jariabek for Sme. "On the other hand, these industries contribute a lot of money to culture and sport.

"Look what happened when this law was implemented in the Czech Republic, but not in Slovakia," he continued. "All the ads went to Czech business, and Slovakia lost billions of crowns. On every [non-Slovak] TV station, there are now ads for vodka - except in Slovakia. It means less money for us."

Wine-makers, hoping for a financial boost from the law, also applauded the change. Rudolf Hečko, economic director at Víno Nitra, said that his firm hoped that the new law would result in Slovaks drinking more wine.

"We naturally welcome the decision," he said. "We've been having a difficult time telling consumers about our new products. We hope this law will raise consumption. It's important for us to remind wine consumers that we're here."

Advertisers, too, said they hoped the law would pass through parliament. "This would be a very good decision," said Štefan Kačo, deputy director of the BOAT advertising agency. "It would help raise advertising revenues as well as income for the state budget from taxes [paid on alcohol and tobacco products].

"Slovakia will gain millions of crowns annually if this law is passed. Tobacco and alcohol firms are rich and want to invest in advertising. It will definitely help advertisers, and the economy as a whole."

While supporters laud the law's promised economic benefits, critics ask at what price.

"Tolerance is much higher in Slovakia for alcoholics than for abstainers," said Banská Bystrica hospital's Nábělek. "In this sense, our societal values have been deformed. Slovaks have a tendency to break the rules if drinking is prohibited. They'll say 'Well, in that case, I'll drink even more'. It might have something to do with the Slavic mentality - there are similar problems with alcoholism in Ukraine, Poland and Russia."

Non-medical experts, however, maintain that the law would have minimal, if any, negative results.

"Those who are dependent on alcohol won't be influenced by the new law," said Víno Nitra's Hečko. "Addicts won't change just because there'll be more wine ads around. Besides, wine is good for you. Medical experts have proven that there are positive effects on your health for those who drink two decilitres [one glass] of wine a day."

With Lucia Nicholsonová
in Banská Bystrica