With French Societe Generale and Italy's Banca Commerciale Italiana carrying out due diligence in Všeobecná úverová banka (VÚB), OTP, Hungary's largest bank, doing the same in Investična a rozvojová banka (IRB), and Slovenská sporiteľňa (SLSP) already sold off to Austria's Erste Bank, the government's two-year bank restructuring and privatisation scheme is drawing to a close.
VÚB's sale is expected to be closed in June, and that of IRB possibly in May. While some doubts still exist as to how successful IRB's privatisation will be, thoughts within the sector are already turning to 'life after privatisation', and what the new owners of the two largest banks in Slovakia, along with those of IRB, will bring to what the government has freely admitted is a sector in need of a foreign shake up. 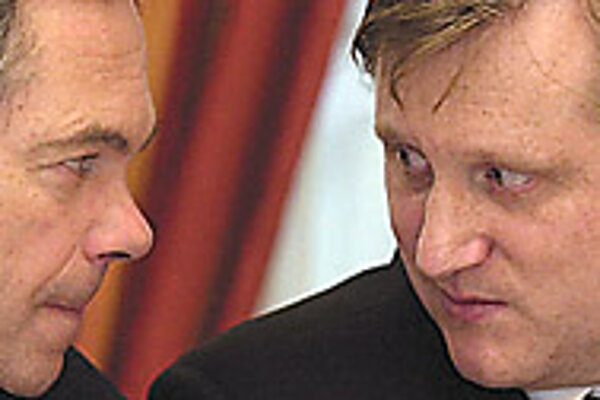 VÚB's sale is expected to be closed in June, and that of IRB possibly in May. While some doubts still exist as to how successful IRB's privatisation will be, thoughts within the sector are already turning to 'life after privatisation', and what the new owners of the two largest banks in Slovakia, along with those of IRB, will bring to what the government has freely admitted is a sector in need of a foreign shake up.

"After privatisation, what we can or should do to help banks in Slovakia is very limited, but there are a number of things which we would expect from new foreign owners of these banks," says Juraj Renčko, head of the Bank Privatisation Unit at the Finance Ministry, which has been coordinating the sell-offs.

"What we want to see is them bringing in a new strength and climate of operations to the sector, and we especially need to see the number of loans provided to companies rise. We saw a credit crunch in 1998, 1999 and last year which has harmed the growth of the corporate sector. We need an end to this."

Although interest rates on loans have fallen from an average of 30% when the government came into power in October 1998 to today's 12%, many businesses, and crucially small and medium-sized firms (SMEs) - considered the driving force of any corporate sector - have found it almost impossible to get credits. A history of poor lending decisions, which forced the government to implement a 100 billion crown clean-up of loan portfolios in the three state banks in late 1999, has left banks reluctant to lend.

However, after Erste's acquisition of SLSP, the Slovak finance house's management has already hinted at a possible softening of loan criteria, and in February started a six-month review of their lending programmes.

For SMEs, new ownership of the banks is the one ray of hope they have for getting credit and seeing their sector grow.

"We all hope that there will be a change in the lending policies of these banks in favour of SMEs to give them a chance to get loans with good conditions. It's something they just can't do right now," says Darina Kalužniková, director of the department of financial support programmes at the National Agency for the Development of SMEs.

"It's hard to predict exactly what these new owners will have in the way of plans for the banks, but it is vital for the corporate sector that SMEs can start to get loans."

Some sector experts remain convinced that these credits will, though, be easier to obtain after the three banks are privatised.

"Privatisation in the banking sector will almost certainly see a further lowering of interest rates, and the number of loans provided should really rise. The sector itself will probably lead the full revitalisation of the economy through [loans to] the corporate sector," explains Mário Blaščak, analyst at Ľudová banka.

Taking the corporate sector out of a credit crunch is one of the positives which the government hopes to derive from the privatisations of its three banks. Another is a new internal discipline that even those within the privatised banks say is desperately needed.

"People may well think that the restructuring process is over, in the sense that bad loans have been mostly taken out of banks' portfolios, but there is so much more that has to be done," says one senior source in the banking sector who asked not to be named.

"There's a whole number of things which have to be done yet, and will be on the shoulders of the new owners alone, such as getting staff to be more efficient and introducing not just new services, but also a new corporate culture, and setting internal rules and guidelines within that culture. That will take possibly years," the source adds.

Loans given by banks under the regime of former premier Vladimír Mečiar [1994-1998] were, managers now say, given out on the basis of personal and political ties and with little or no regard to the viability of individual projects. The result was a government clean-up bill of 100 billion crowns and a credit crunch as new managers shut down lending after opening up their books to find gaping holes in finances.

Indeed, for Renčko, a new sense of corporate governance at banks, which only western banks' presence can fully reinforce, is a cornerstone to the health of the sector. "One thing we [the Bank Privatisation Unit] can never do is to create internal discipline at banks, with regard to corporate governance etc. Enforcement of internal procedures within banks is important to the overall health of the sector."

And for those banks which have been or are to soon be privatised, the change in ownership will, they say, bring them and the overall finance sector into line with those in western countries. "We are presuming that like us, the two other banks, VÚB and IRB, will be sold to foreign firms, and we would expect the new owners to bring in new sets of guidelines for banking and management and sector know-how that will raise the Slovak banking sector to western standards, to make it a standard banking sector," says Jana Ďuricová, spokesperson for SLSP.

"We already have transition teams in place here working on implementing the standard procedures already used by Erste in its other banks."

As The Slovak Spectator went to print, Erste was planning to set up its new management at Slovenská sporiteľňa, appointing a new board under the stewardship of new board of directors chairperson Regina Ovesny-Straka, formerly of Bank Austria-Creditanstalt.

But even before the board took its seat, analysts had begun to speculate on what the new banks would need from the government post-privatisation.

Last year a new Bankruptcy Law was passed, making it easier and quicker to bring companies through bankruptcy procedures. International groups such as the World Bank had been joined by domestic finance houses in criticising prior legislation, which often left bankruptcy cases stalled in courts and denied banks the chance to reclaim assets from failed firms, or resurrect viable parts of companies in deep financial trouble to get their money back. This again made them reluctant to extend further credits to firms.

"The Bankruptcy Law was unworkable, and other legislation still needs a lot of work," says SLSP analyst Kmeť. "That's why banks are still hesitant to lend."

The new law speeds up the process, and in tandem with new legislation such as an amendment to the Commercial Code currently being worked on by the government, banks should have a more comfortable legislative framework for relations with the corporate sector, Renčko says.

"The amended Commercial Code and other legislative changes will bring in new standards for the corporate sector, including making sure that there is implementation of OECD guidelines and principles of corporate governance," he said, adding that other institutional measures, such as a new Bank Act, approved by cabinet and soon to be presented to parliament, would buttress the health of the sector.

"The new Bank Act will help the banking sector because it will strengthen corporate governance in banks and allow the central bank to carry out quarterly audits on financial institutions and their figures, rather than just on the yearly basis at present, giving them a chance to deal earlier with any problems in banks which may arise."

With the planned changes in legislation, and the possible softening of loan criteria, the plans of new owners of the state's finance houses are paramount to the future of the Slovak banking sector. But for many, the fact that the banks seem all to be heading into foreign hands, and not back into the potentially damaging clutches of less bank-savvy Slovak managers, is crucial.

"It would have been a disaster if the banks had stayed in domestic hands," says Kmeť. "The sales have been a success so far and SLSP was sold in a clear and transparent way. And, thankfully, to a foreign investor."